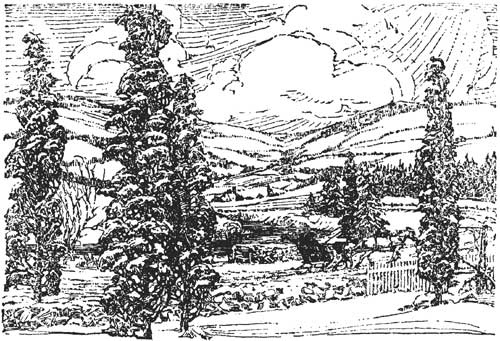 Well, the problem never was solved, never in this world, at least; and those who were in the sitting-room chamber when Eva was shown her two babies lying side by side on a pillow, never forgot the quick glance of horrified incredulity, or the shriek of aversion with which she greeted them.

Letty had a sense of humor, and it must be confessed that when the scorned and discarded babies were returned to her, and she sat by the kitchen stove trying to plan a second bottle, a second cradle, and see how far the expected baby could divide its modest outfit with the unexpected one, she burst into a fit of hysterical laughter mingled with an outpour of tears.

The doctor came in from the sick-room puzzled and crestfallen from his interview with an entirely new specimen of woman-kind. He had brought Letty and David into the world and soothed the last days of all her family, and now in this tragedy—for tragedy it was—he was her only confidant and adviser.

Letty looked at him, the tears streaming from her eyes.

"Oh, Doctor Lee, Doctor Lee! If an overruling Providence could smile, wouldn't He smile now? David and Eva never wanted to marry each other, I'm sure of it, and the last thing they desired was a child. Now there are two of them. Their father is away, their mother won't look at them! What will become of me until Eva gets well and behaves like a human being? I never promised to be an aunt to twins; I never did like twins; I think they're downright vulgar!"

quoted the doctor. "It's worse even than you think, my poor Letty, for the girl can't get well, because she won't! She has gritted her teeth, turned her face to the wall, and refused her food. It's the beginning of the end. You are far likelier to be a foster mother than an aunt!"

Letty's face changed and softened and her color rose. She leaned over the two pink, crumpled creatures, still twitching nervously with the amazement and discomfort of being alive. "COME TO YOUR AUNT LETTY THEN AND BE MOTHERED!" SHE SOBBED

"That's right, that's right," said the doctor over a lump in his throat. "We mustn't let the babies pay the penalty of their parents' sins; and there's one thing that may soften your anger a little, Letty: Eva's not right; she's not quite responsible. There are cases where motherhood, that should be a joy, brings nothing but mental torture and perversion of instinct. Try and remember that, if it helps you any. I'll drop in every two or three hours and I'll write David to come at once. He must take his share of the burden."

Well, David came, but Eva was in her coffin. He was grave and silent, and it could not be said that he showed a trace of fatherly pride. He was very young, it is true, thoroughly ashamed of himself, very unhappy, and anxious about his new cares; but Letty could not help thinking that he regarded the twins as a sort of personal insult,—perhaps not on their own part, nor on Eva's, but as an accident that might have been prevented by a competent Providence. At any rate, he carried himself as a man with a grievance, and when he looked at his offspring, which was seldom, it seemed to Letty that he regarded the second one as an unnecessary intruder and cherished a secret resentment at its audacity in coming to this planet uninvited. He went back to his work in Boston without its having crossed his mind that anybody but his sister could take care of his children. He didn't really regard them as children or human beings; it takes a woman's vision to make that sort of leap into the future. Until a new-born baby can show some personal beauty, evince some intellect, stop squirming and squealing, and exhibit enough self-control to let people sleep at night, it is not, as a rule, persona grata to any one but its mother.

David did say vaguely to Letty when he was leaving, that he hoped "they would be good," the screams that rent the air at the precise moment of farewell rather giving the lie to his hopes.

Letty was struggling to end the interview without breaking down, for she was worn out nervously as well as physically, and thought if she could only be alone with her problems and her cares she would rather write to David than tell him her mind face to face.

Brother and sister held each other tightly for a moment, kissed each other good-bye, and then Letty watched Osh Popham's sleigh slipping off with David into the snowy distance, the merry tinkle of the bells adding to the sadness in her dreary heart. Dick gone yesterday, Dave to-day; Beulah without Dick and Dave! The two joys of her life were missing and in their places two unknown babies whose digestive systems were going to need constant watching, according to Dr. Lee. Then she went about with set lips, doing the last sordid things that death brings in its wake; doing them as she had seen her mother do before her. She threw away the husks in Eva's under mattress and put fresh ones in; she emptied the feathers from the feather bed and pillows and aired them in the sun while she washed the ticking; she scrubbed the paint in the sick-room, and in between her tasks learned from Clarissa Perry the whole process of bringing up babies by hand.

That was three years ago. At first David had sent ten dollars a month from his slender earnings, never omitting it save for urgent reasons. He evidently thought of the twins as "company" for his sister and their care a pleasant occupation, since she had "almost" a living income; taking in a few coats to make, just to add an occasional luxury to the bare necessities of life provided by her mother's will.

His letters were brief, dispirited, and infrequent, but they had not ceased altogether till within the last few months, during which Letty's to him had been returned from Boston with "Not found" scribbled on the envelopes.

The firm in whose care Letty had latterly addressed him simply wrote, in answer to her inquiries, that Mr. Gilman had not been in their employ for some time and they had no idea of his whereabouts.

The rest was silence.