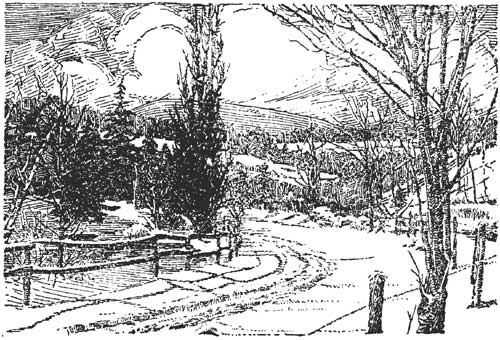 "That's a bargain and here's my hand on it," cried Dick. "Now, what do you say to letting me be Santa Claus? Come on in and let's look at John Trimble. He'd make a splendid Job or Jeremiah, but I wouldn't let him spoil a Christmas festival!"

"Do let Dick take the part, father,"—and Mrs. Todd's tone was most ingratiating. "John's terrible dull and bashful anyway, an' mebbe he'd have a pain he couldn't stan' jest when he's givin' out the presents. An' Dick is always so amusin'."

Deacon Todd led the way into the improvised dressing-room. He had removed John's gala costume in order to apply the mustard faithfully and he lay in a crumpled heap in the corner. The plaster itself adorned a stool near by.

"Now, John! John! That plaster won't do you no good on the stool. It ain't the stool that needs drawin'; it's your stomach," argued Mrs. Todd.

"Wrop him up and get him into your sleigh, father, and take him home; then come right back. Bed's the place for him. Keep that hot flat-iron on his stomach, if he'd rather have it than the mustard. Men-folks are such cowards. I'll dress Dick while you're gone. Mebbe it's a Providence!"

On the whole, Dick agreed with Mrs. Todd as he stood ready to make his entrance. The School Committee was in the church and he had had much to do with its members in former days. The Select-men of the village were present, and he had made their acquaintance once, in an executive session. The deacons were all there and the pillars of the church and the choir and the organist—a spinster who had actively disapproved when he had put beans in the melodeon one Sunday. Yes, it was best to meet them in a body on a festive occasion like this, when the rigors of the village point of view were relaxed. It would relieve him of several dozen private visits of apology, and altogether he felt that his courage would have wavered had he not been disguised as another person altogether: a popular favorite; a fat jolly, rollicking dispenser of bounties to the general public. When he finally discarded his costume, would it not be easier, too, to meet his father first before the church full of people and have the solemn hour with him alone, later at night? Yes, as Mrs. Todd said, "Mebbe 'twas a Providence!"

There was never such a merry Christmas festival in the Orthodox church of Beulah; everybody was of one mind as to that. There was a momentary fear that John Trimble, a pillar of prohibition, might have imbibed hard cider; so gay, so nimble, so mirth-provoking was Santa Claus. When was John Trimble ever known to unbend sufficiently to romp up the side aisle jingling his sleigh bells, and leap over a front pew stuffed with presents, to gain the vantage-ground he needed for the distribution of his pack? The wing pews on one side of the pulpit had been floored over and the Christmas Tree stood there, triumphant in beauty, while the gifts strewed the green-covered platform at its feet.

How gay, how audacious, how witty was Santa Claus! How the village had always misjudged John Trimble, and how completely had John Trimble hitherto obscured his light under a bushel. In his own proper person children avoided him, but they crowded about this Santa Claus, encircling his legs, gurgling with joy when they were lifted to his shoulder, their laughter ringing through the church at his droll antics. A sense of mystery grew when he opened a pack on the pulpit stairs, a pack unfamiliar in its outward aspect to the Committee on Entertainment. Every girl had a little doll dressed in fashionable attire, and every boy a brilliantly colored, splendidly noisy, tin trumpet; but hanging to every toy by a red ribbon was Mrs. Larrabee's Christmas card; her despised one about the "folks back home." HANDS THAT TREMBLED, AS EVERYBODY COULD SEE

The publishers' check to the minister's wife had been accompanied by a dozen complimentary copies, but these had been sent to Reba's Western friends and relations; and although the card was on many a marble-topped table in Beulah, it had not been bought by all the inhabitants, by any means. Fifteen cents would purchase something useful, and Beulah did not contain many Crœsuses. Still, here the cards were,—enough of them for everybody,—with a linen handkerchief for every woman and every man in the meeting-house, and a dozen more sticking out of the pack, as the people in the front pews could plainly see. Modest gifts, but plenty of them, and nobody knew from whence they came! There was a buzzing in the church, a buzzing that grew louder and more persistent when Santa Claus threw a lace scarf around Mrs. Larrabee's shoulders and approached her husband with a fine beaver collar in his hands: hands that trembled, as everybody could see, when he buttoned the piece of fur around the old minister's neck.

And the minister? He had been half in, and half out of, a puzzling dream for ten minutes, and when those hands of Santa Claus touched him, his flesh quivered. They reminded him of baby fingers that had crept around his neck years ago when he patiently walked the parsonage floor at night with his ailing child in his arms. Every drop of blood in his veins called out for answer. He looked above the white cotton beard and mustache to a pair of dark eyes; merry, mischievous, yet tender and soft; at a brown wavy lock escaping from the home-made wig. Then those who were near heard a weak voice say, "My son!" and those who were far away observed Santa Claus tear off his wig and beard, heard him cry, "Father!"—and, as Mrs. Todd said afterwards, saw him "fall on to the minister's neck right there before the whole caboodle, an' cling to him for all the world like an engaged couple, only they wouldn't 'a' made so free in public."

No ice but would have thawed in such an atmosphere! Grown-up Beulah forgot how much trouble Dick Larrabee had caused in other days, and the children had found a friend for all time. The extraordinary number of dolls, trumpets, handkerchiefs, and Christmas cards circulating in the meeting-house raised the temperature considerably, and induced a general feeling that if Dick Larrabee had really ever been a bit wild and reckless, he had evidently reformed, and prospered, besides.

Yes, no one but a kind and omniscient Providence could have so beautifully arranged Dick Larrabee's homecoming, and so wisely superintended his complete reinstatement in the good graces of Beulah village. A few maiden ladies felt that he had been a trifle immodest in embracing, and especially in kissing, his father in front of the congregation; venturing the conviction that kissing, an indecorous custom in any event, was especially lamentable in public.

"Pity Letty Boynton missed this evenin'," said Mrs. Todd. "Her an' Dick allers had a fancy for each other, so I've heard, though I don't know how true. Clarissa Perry might jest as well have stayed with the twins as not, for her niece that spoke a piece forgot 'bout half of it an' Clarissa was in a cold sweat every minute. Then the niece had a fit o' cryin', she was so ashamed at failin', an' Clarissa had to take her home. So they both missed the tree, an' Letty might 'a' been here as well as not an' got her handkerchief an' her card. I sent John Trimble's to him by the doctor, but he didn't take no notice, Isaac said, for the doctor was liftin' off the hot flat-iron an' puttin' turpentine on the spot where I'd had my mustard.—Anyway, if John had to have the colic he couldn't 'a' chosen a better time, an' if he gets over it, I shall be real glad he had it; for nobody ever seen sech a Santa Claus as Dick Larrabee made, an' there never was, an' never will be, sech a lively, an' amusin' an' free-an'-easy evenin' in the Orthodox church."