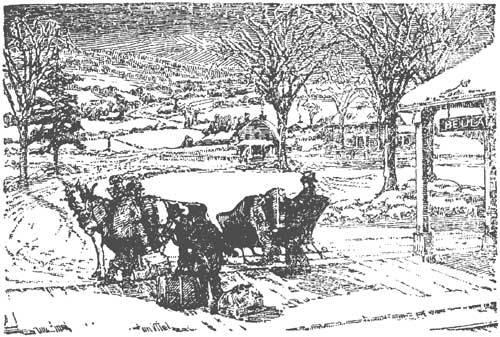 Repeating history, Letty was again at her open window. She had been half-ashamed to reproduce the card, as it were, but something impelled her. She was safe from scrutiny, too, for everybody had gone to the tree—the Pophams, Mr. Davis, Clarissa Perry, everybody for a quarter of a mile up and down the street, and by now the company would be gathered and the tree lighted. She could keep watch alone, the only sound being that of the children's soft breathing in the next room.

Letty had longed to go to the festival herself, but old Clarissa Perry, who cared for the twins now and then in Letty's few absences, had a niece who was going to "speak a piece," and she yearned to be present and share in the glory; so Letty was kept at home as she had been numberless other times during the three years of her vicarious motherhood.

The night was mild again, as in the year before. The snow lay like white powder on the hard earth; the moon was full, and the street was a length of dazzling silence. The lighted candle was in the parlor window, shining toward the meeting-house, the fire burned brightly on the hearth, the front door was ajar. Letty wrapped her old cape round her shoulders, drew her hood over her head, and seating herself at the window repeated under her breath:—

"My door is on the latch to-night,
The hearth-fire is aglow.
I seem to hear swift passing feet,
The Christ Child in the snow.

"My heart is open wide to-night
For stranger, kith, or kin;
I would not bar a single door
Where Love might enter in!"

And then a footstep, drawing ever nearer, sounded crunch, crunch, in the snow. Letty pushed her chair back into the shadow. The footstep halted at the gate, came falteringly up the path, turned aside, and came nearer the window. Then a voice said: "Don't be frightened Letty, it's David! Can I come in? I haven't any right to, except that it's Christmas Eve."

That, indeed, was the magic, the all-comprehending phrase that swept the past out of mind with one swift stroke: the acknowledgment of unworthiness, the child-like claim on the forgiving love that should be in every heart on such a night as this. Resentment melted away like mist before the sun. Her deep grievance—where had it gone? How could she speak anything but welcome? For what was the window open, the fire lighted, the door ajar, the guiding candle-flame, but that Love, and David, might enter in?

There were few words at first; nothing but close-locked hands and wet cheeks pressed together. Then Letty sent David into the children's room by himself. If the twins were bewitching when awake, they were nothing short of angelic when asleep. "I NEVER THOUGHT OF THEM AS MY CHILDREN BEFORE"

David came out a little later, his eyes reddened with tears, his hair rumpled, his face flushed. He seemed like a man awed by an entirely new experience. He could not speak, he could only stammer brokenly:—

"As God is my witness, Letty, there's been something wrong with me up to this moment. I never thought of them as my children before, and I can't believe that such as they can belong to me. They were never wanted, and I've never had any interest in them. I owe them to you, Letty; you've made them what they are; you, and no one else."

"If there hadn't been something there to build on, my love and care wouldn't have counted for much. They're just like dear mother's people for good looks and brains and pretty manners: they're pure Shirley all the way through, the twinnies are."

"It's lucky for me that they are!" said David humbly. "You see, Letty, I married Eva to keep my promise. If I was old enough to make it, I was old enough to keep it, so I thought. She never loved me, and when she found out that I didn't love her any longer she turned against me. Our life together was awful, from beginning to end, but she's in her grave, and nobody'll ever hear my side, now that she can't tell hers. When I looked at those two babies the day I left you, I thought of them only as retribution; and the vision of them—ugly, wrinkled, writhing little creatures—has been in my mind ever since."

"They were compensation, not retribution, David. I ought to have told you how clever and beautiful they were, but you never asked and my pride was up in arms. A man should stand by his own flesh and blood, even if it isn't attractive; that's what I believe."

"I know, I know! But I've had no feeling for three years. I've been like a frozen man, just drifting, trying to make both ends meet, my heart dead and my body full of pain. I'm just out of a hospital—two months in all."

"Oh, it was way out in Missouri. I was taken ill very suddenly at the hotel in St. Joseph and they moved me at once. There were two operations first and last, and I didn't know enough to feed myself most of the time."

"Poor, poor Buddy! Did you have good care?"

"The best. I had more than care. Ruth Bentley, the nurse that brought me back to life, made me see what a useless creature I was."

Some woman's instinct stirred in Letty at a new note in her brother's voice and a new look in his face. She braced herself for his next words, sure that they would open a fresh chapter. The door and the window were closed now, the shades pulled down, the fire low; the hour was ripe for confidences.

"You see, Letty,"—and David cleared his throat nervously, and looked at the coals gleaming behind the Hessian soldiers,—"it's a time for a thorough housecleaning, body, mind, and soul, a long illness is; and Miss Bentley knew well enough that all was wrong with me. I mentioned my unhappy marriage and told her all about you, but I said nothing about the children."

"Why should you?" asked Letty, although her mind had leaped to the reason already.

"Well, I was a poor patient in one of the cheapest rooms; broken in health, without any present means of support. I wanted to stand well with her, she had been so good to me, and I thought if she knew about the twins she wouldn't believe I could ever make a living for three."

"Still less for four!" put in Letty, with an irrepressible note of teasing in her tone.

She had broken the ice. Like a torrent set free, David dashed into the story of the last two months and Ruth Bentley's wonderful influence. How she had recreated him within as well as without. How she was the best and noblest of women, willing to take a pauper by the hand and brace him up for a new battle with life.

"Strength appeals to me," confessed David. "Perhaps it's because I am weak; for I'm afraid I am, a little!"

"Be careful, Davy! Eva was strong!"

David shuddered. He remembered a strength that lashed and buffeted and struck and overpowered.

"Ruth is different," he said. "'Out of the strong came forth sweetness' used to be one of Parson Larrabee's texts. That's Ruth's kind of strength.—Can I—will you let me bring her here to see you, Letty,—say for New Year's? It's all so different from the last time I asked you. Then I knew I was bringing you nothing but sorrow and pain, but Ruth carries her welcome in her face."

The prop inside of Letty wavered unsteadily for a moment and then stood in its accustomed upright position.

"Why not?" she asked. "It's the right thing to do; but you must tell her about the children first."

"Oh! I did that long ago, after I found out that she cared. It was only at first that I didn't dare. I haven't told you, but she went out for her daily walk and brought me home a Christmas card, the prettiest one she could find, she said. I was propped up on pillows, as weak as a kitten. I looked at it and looked at it, and when I saw that it was this room, the old fireplace and mother's picture, and the Hessian soldier andirons, when I realized there was a face at the window and that the door was ajar,—everything just swam before me and I fainted dead away. I had a relapse, and when I was better again I told her everything. She's fond of children. It didn't make any difference, except for her to say that the more she had to do for me, the more she wanted to do it."

"Well," said Letty with a break in her voice, "that's love, so far as I can see, and if you've been lucky enough to win it, take it and be thankful, and above all, nurse and keep it.—So one of Reba's cards, the one the publisher thought would never sell, found you and brought you back! How wonderful! We little thought of that, Reba and I!"

"Reba's work didn't stop there, Letty! There was so much that had to be said between you and me, just now, that I couldn't let another subject creep in till it was finished and we were friends;—but Dick Larrabee saw Reba's card about 'the folks back home' in Chicago and he bought a ticket for Beulah just as I did. We met in the train and compared notes."

The blood started in Letty's heart and sped hither and thither, warming her from head to foot.

"Yes, looking as fit as a fiddle; the way a man looks when things are coming his way."

"But what did the card mean to him? Did he seem to like Reba's verses?"

"Yes, but I guess the card just spelled home to him; and he recognized this house in a minute, of course. I showed him my card and he said: 'That's Letty fast enough: I know the cape.' He recognized you in a minute, he said."

He knew the cape! Yes, the old cape had been close to his shoulder many a time. He liked it and said it matched her hair.

"He was awfully funny about your ear, too! I told him I never noticed women's ears, and he said he did, when they were pretty, and their eyelashes, too.—Anything remarkable about your eyelashes, Letty?"

"Nothing that I'm aware of!" said Letty laughingly, although she was fibbing and she knew it.

"And he said he'd call and say 'Merry Christmas' to you the first thing to-morrow; that he would have been here to-night but you'd know his father had to come first. You don't mind being second to the parson, do you?"

No, Letty didn't mind. Her heart was unaccountably light and glad, like a girl's heart. It was the Eve of Mary when all women are blest because of one. The Wise Men brought gifts to the Child; Letty had often brought hers timidly, devoutly, trustfully, and perhaps to-night they were coming back to her!