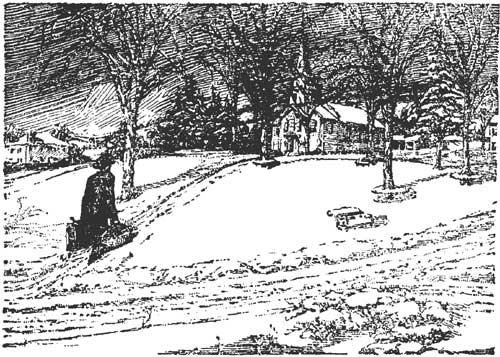 "Put the things down on the front steps," said Dick to the driver as he neared the parsonage. "If there's nobody at home I'll go on up to the church after I've got this stuff inside."

"No, don't need one. I've picked all the locks with a penknife many a time. Besides, the key is sure to be under the doormat. Yes, here it is! Of all the unaccountable customs I ever knew, that's the most laughable!"

"Works all right for you!"

"Yes, and for all the other tramps,"—and Dick opened the door and lifted in his belongings. "Good-night," he called to the driver; "I'll walk up to the church after I've found out whether mother keeps the mince pie and cider apple sauce in the same old place."

A few minutes later, his hunger partially stayed, Dick Larrabee locked the parsonage door and took the well-trodden path across the church common. It was his father's feet, he knew, that had worn the shoveled path so smooth; his kind, faithful feet that had sped to and fro on errands of mercy, never faltering in all the years.

It was nearly eight o'clock. The sound of the melodeon, with children's voices, floated out from the white-painted meeting-house, all ablaze with light; or as much ablaze as a kerosene chandelier and six side lamps could make it. The horse sheds were crowded with teams of various sorts, the horses well blanketed and standing comfortably in straw; and the last straggler was entering the right-hand door of the church as Dick neared the steps. Simultaneously the left-hand door opened, and on the background of the light inside appeared the figure of Mrs. Todd, the wife of his ancient enemy, the senior deacon. Dick could see that a sort of dressing-room had been curtained off in the little entry, as it had often been in former times of tableaux and concerts and what not. Valor, not discretion, was the better policy, and walking boldly up to the steps Dick took off his fur cap and said, "Good-evening, Mrs. Todd!"

"Good gracious me! Where under the canopy did you hail from, Dick Larrabee? Was your folks lookin' for you? They ain't breathed a word to none of us."

"Well, I know you've given me one! Will you wait a spell till the recitations is over? You'd scare the children so, if you go in now, that they'd forget their pieces more'n they gen'ally do."

"I can endure the loss of the 'pieces,'" said Dick with a twinkle in his eye.

At which Mrs. Todd laughed comprehendingly, and said: "Isaac'll get a stool or a box or something; there ain't a vacant seat in the church. I wish we could say the same o' Sundays!—Isaac! Isaac! Come out and see who's here," she called under her breath. "He won't be long. He's tendin' John Trimble in the dressin'-room. He was the only one in the village that was willin' to be Santa Claus an' he wa'n't over-willin'. Now he's et something for supper that disagrees with him awfully and he's all doubled up with colic. We can't have the tree till the exercises is over, but that won't be mor'n fifteen minutes, so I sent Isaac home to make a mustard plaster. He's puttin' it on John now. John's dreadful solemn and unamusin' when he's well, and I can't think how he'll act when he's all crumpled up with stomach-ache, an' the mustard plaster drawin' like fire."

Dick threw back his head and laughed. He had forgotten just how unexpected Beulah's point of view always was.

"I've got it on him, mother, tho' he's terrible unresigned to it; an' I've given him a stiff dose o' Jamaica Ginger. We can tell pretty soon whether he can take his part."

"Here's Dick Larrabee come back, Isaac, just when we thought he had given up Beulah for good an' all!" said Mrs. Todd.

The Deacon stood on the top step, his gaunt, grizzled face peering above the collar of his great coat; not a man to eat his words very often, Deacon Isaac Todd.

"Well, young man," he said, "you've found your way home, have you? It's about time, if you want to see your father alive!"

"If it hadn't been for you and others like you, men who had forgotten what it was to be young, I should never have gone away," said Dick hotly. "What had I done worse than a dozen others, only that I happened to be the minister's son?"

"That's just it; you were bringin' trouble on the parish, makin' talk that reflected on your father. Folks said if he couldn't control his own son, he wa'n't fit to manage a church. You played cards, you danced, you drove a fast horse."

"I never did a thing I'm ashamed of but one,"—and Dick's voice was firm. "My misdeeds were nothing but boyish nonsense, but the village never gave me credit for a single virtue. I ought to have remembered father's position, but whatever I was or whatever I did, you had no right to pray for me openly for full five minutes at a public meeting. That galled me worse than anything!"

"Now, Isaac," interrupted Mrs. Todd. "I hope you'll believe me! I've told you once a week, on an average, these last three years, that you might have chastened Dick some other way besides prayin' for him in meetin'!"

The Deacon smiled grimly. "You both talk as if prayin' was one of the seven deadly sins," he said.

"I'm not objecting to your prayers," agreed Dick, "but there were plenty of closets in your house where you might have gone and told the Lord your opinion of me; only that wasn't good enough for you; you must needs tell the whole village!"

"There, father, that's what I always said," agreed Mrs. Todd.

"Well, I ain't one that can't yield when the majority's against me," said the Deacon, "particularly when I'm treatin' John Trimble for the colic. If you'll stop actin' so you threaten to split the church, Dick Larrabee, I'll stop prayin' for you. The Lord knows how I feel about it now, so I needn't keep on remindin' Him."