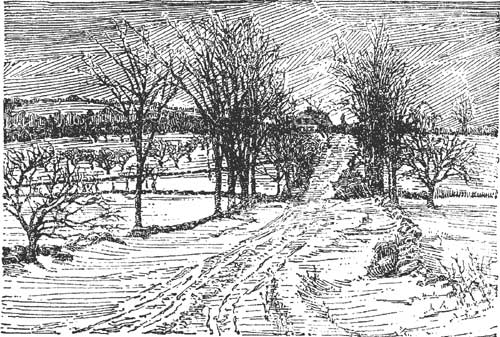 "Bless the card!" sighed David thankfully as he sat down to smoke a good-night pipe and propped his feet contentedly against the little Hessian soldiers. The blaze of the logs on his own family hearth-stone, after many months of steam heaters in the hall bedrooms of cheap hotels, how it soothed his tired heart and gave it visions of happiness to come! The card was on his knee, where he could look from its pictured scene to the real one of which he was again a glad and grateful part.

"Bless the card!" whispered Letty Boynton to herself as she went to her moonlit bedroom. Her eyes searched the snowy landscape and found the parsonage, "over the hills and far away." Then her heart flew like a bird across the distance and beat its wings in gladness, for a faint light streamed from the parson's study windows and she knew that father and son were together. That, in itself, was enough, with David sleeping under the home roof; but to-morrow was coming and to-morrow might be hers—her very own!

"Bless the card!" said Reba Larrabee, the tears shining in her eyes as she left the minister alone with his son. "Bless everybody and everything! Above all, bless God, 'from whom all blessings flow.'"

"Bless the card," said Dick Larrabee when he went up the narrow parsonage stairs to the room of his boyhood and found everything as it had been years ago. He leaned the little piece of paper magic against the mantel clock, threw it a kiss, and then, opening his pocket-book, he went nearer to the lamp and took out the faded tintype of a brown-haired girl in a brown cape. "Bless the card!" he said again, with a new note in his voice: "Bless the girl! And bless to-morrow if it brings me what I want most in all the world!"