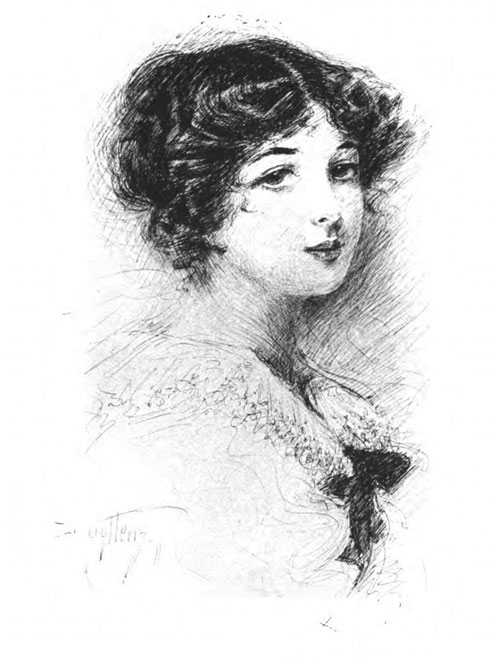 He looked up from his desk, stared a moment and nodded. It is doubtful if he saw the girl, for his eyes had an introspective expression.

Orissa went to a cabinet wardrobe and took down her coat and hat. Turning around to put them on she moved a chair, which squeaked on the polished floor. The sound made Mr. Burthon shudder, and aroused him as her speech had not done.

“Why, Miss Kane!” he exclaimed, regarding her with surprise, “it is only four o’clock.”

“I know, sir,” said Orissa uneasily, “but the mail is ready and all the deeds and transfers have been made out for you to sign. I—I wanted an extra hour, to-night, so I worked during lunch time.”

“Oh; very well,” he said, stiffly. “But I do not approve this irregularity, Miss Kane, and you may as well understand it. I engage your services 14by the week, and expect you to keep regular hours.”

“I won’t go, then,” she replied, turning to hang up her coat.

“Yes, you will. For this afternoon I excuse you,” he said, turning again to his papers.

Orissa did not wish to offend her employer. Indeed, she could not afford to. This was her first position, and because she was young and girlish in appearance she had found it difficult to secure a place. Perhaps it was because she had applied to Mr. Burthon during one of his fits of abstraction that she obtained the position at all; but she was competent to do her work and performed it so much better than any “secretary” the real estate agent had before had that he would have been as loth to lose her as she was to be dismissed. But Orissa did not know that, and hesitated what to do.

“Run along, Miss Kane,” said her employer, impatiently; “I insist upon it—for to-night.”

So, being very anxious to get home early, the girl accepted the permission and left the office, feeling however a little guilty for having abridged her time there.

She had a long ride before her. Leaving the office at four o’clock meant reaching home forty minutes later; so she hurried across the street 15and boarded a car marked “Beverly.” Los Angeles is a big city, because it is spread from the Pacific Ocean to the mountains—an extreme distance of more than thirty miles. Yet it is of larger extent than that would indicate, as country villages for many miles in every direction are really suburbs of the metropolis of Southern California and the inhabitants ride daily into the city for business or shopping.

It was toward one of these outlying districts that Orissa Kane was now bound. They have rapid transit in the Southwest, and the car, headed toward the north but ultimately destined to reach the sea by way of several villages, fairly flew along the tracks. It was August and a glaring sun held possession of a cloudless sky; but the ocean breeze, which always arrives punctually the middle of the afternoon, rendered the air balmy and invigorating.

It was seldom that this young girl appeared anywhere in public without attracting the attention of any who chanced to glance into her sweet face. Its contour was almost perfect and the coloring exquisite. In addition she had a slender form which she carried with exceeding grace and a modest, winning demeanor that was more demure and unconscious than shy.

Such a charming personality should have been 16clothed in handsome raiment; but, alas, poor Orissa’s gown was the simplest of cheap lawns, and of the ready-made variety the department stores sell in their basements. It was not unbecoming, nor was the coarse straw hat with its yard of cotton-back ribbon; yet the case was stated to-day very succinctly by a middle-aged gentleman who sat with his wife in the car seat just behind Orissa:

“If that girl was our daughter,” said he, “I’d dress her nicely if it took half my income to do it. Great Cæsar! hasn’t she anyone to love her, or care for her? She seems to me like a beautiful piece of bric-a-brac; something to set on a pedestal and deck with jewels and laces, for all to admire.”

“Pshaw!” returned the lady; “a girl like that will be admired, whatever she wears.”

Orissa had plenty of love, bestowed by those nearest and dearest to her, but circumstances had reduced the family fortunes to a minimum and the girl was herself to blame for a share of the poverty the Kanes now endured.

The car let her off at a wayside station between two villages. It was in a depression that might properly be termed a valley, though of small extent, and as the car rushed on and left her standing beside a group of tall palms it at first 17appeared there were no houses at all in the neighborhood.

But that was not so; a well defined path led into a thicket of evergreens and then wound through a large orange orchard. Beyond this was a vine covered bungalow of the type so universal in California; artistic to view but quite inexpensive in construction.

High hedges of privet surrounded the place, but above this, in the space back of the house, rose the canvas covered top of a huge shed—something so unusual and inappropriate in a place of this character that it would have caused a stranger to pause and gape with astonishment.

Orissa, however, merely glanced at the tent-like structure as she hurried along the path. She turned in at the open door of the bungalow, tossed hat and jacket into a chair and then went to where a sweet-faced woman sat in a morris chair knitting. In a moment you would guess she was Orissa’s mother, for although the features were worn and thin there was a striking resemblance between them and those of the fresh young girl stooping to kiss her. Mrs. Kane’s eyes were the same turquoise blue as her daughter’s; but, although bright and wide open they lacked any expression, for they saw nothing at all in our big, beautiful world.

“A whole hour,” said Orissa. “But I promised Steve I’d try to get home at this time, for he wants me to help him. Can I do anything for you first, mamma?”

“No,” was the reply; “I am quite comfortable. Run along, if Steve wants you.” Then she added, in a playful tone: “Will there be any supper to-night?”

“Oh, yes, indeed! I’ll break away in good season, never fear. Last night I got into the crush of the ‘rush hour,’ and the car was detained, so both Steve and I forgot all about supper. I’ll run and change my dress now.”

“I’m afraid the boy is working too hard,” said Mrs. Kane, sighing. “The days are not half long enough for him, and he keeps in his workshop, or hangar, or whatever you call it, half the night.”

“True,” returned Orissa, with a laugh; “but it is not work for Steve, you know; it’s play. He’s like a child with a new toy.”

“I hope it will not prove a toy, in the end,” remarked Mrs. Kane, gravely. “So much depends upon his success.”

But as she discarded the lawn for a dark gingham in her little chamber, Orissa’s face was more 19serious than her words and she wondered—as she had wondered hundreds of times—whether her brother’s great venture would bring them ruin or fortune.