All that day Orissa was in a state of great depression. Even Mr. Burthon noticed her woebegone face and inquired if she were ill. The girl had staked everything on Steve’s success and until now had not permitted a doubt to creep into her mind. But the behavior of the aircraft was certainly not reassuring and for the first time she faced the problem of what would happen if it proved a failure. They would be ruined financially; the place would have to be sold; worst of all, her brother’s chagrin and disappointment might destroy his youthful ambition and leave him a wreck.

Somehow the girl managed to accomplish her work that day and at evening, weary and despondent, returned to her home. When she left the car her step was slow and dragging until Steve came running to meet her. His face was beaming as he exclaimed:

“I’ve found the trouble, Ris! It was all my stupidity. I put a pin in the front elevator while I was working at it, and forgot to take it out again. No wonder it wouldn’t rise—it just couldn’t!”

Orissa felt as if a great weight had been lifted from her shoulders.

“Are you sure it will work now?” she asked breathlessly.

“It’s bound to work. I’ve planned all right; that I know; and having built the aircraft to do certain things it can’t fail to do them. Provided,” he added, more soberly, “I haven’t overlooked something else.”

“Are the repairs completed, Steve?”

“All is in apple-pie order for to-morrow morning’s test.”

It was a dreadfully long evening for them both, but after going to bed Orissa was so tired and relieved in spirit that she fell into a deep sleep that lasted until Steve knocked at her door at early dawn.

“Saturday morning,” he remarked, as together they went out to the hangar. “Do you suppose yesterday being Friday had anything to do with our hard luck?”

“No; it was only that forgotten pin,” she declared.

Again they wheeled the aircraft out to Marston’s pasture, and once more the girl’s heart beat high with hope and excitement.

Steve took a final look at every part, although he had already inspected his work with great care. Then he sprang into the seat and said:

The motor whirred—faster and faster—the clutch gripped the propeller, and away darted the aircraft. It rolled half way across the pasture, then lifted and began mounting into the air. Orissa stood with her hands clasped over her bosom, straining her eyes to watch every detail of the flight.

Straight away soared the aircraft, swift as a bird, until it was a mere speck in the gray sky. The girl could not see the turn, for the circle made was scarcely noticeable at that distance, but suddenly she was aware that Steve was returning. The speck became larger, the sails visible. The young aviator passed over the pasture at a height of a hundred feet from the ground, circled over their own garden and then began to descend. As he did so the aircraft assumed a rocking motion, side to side, which increased so dangerously that Orissa screamed without knowing that she did so.

Down came the aëroplane, reaching the earth on a side tilt that crushed the light planes into kindling wood and a mass of crumpled canvas. Steve rolled out, stretched his length upon the ground, and lay still. 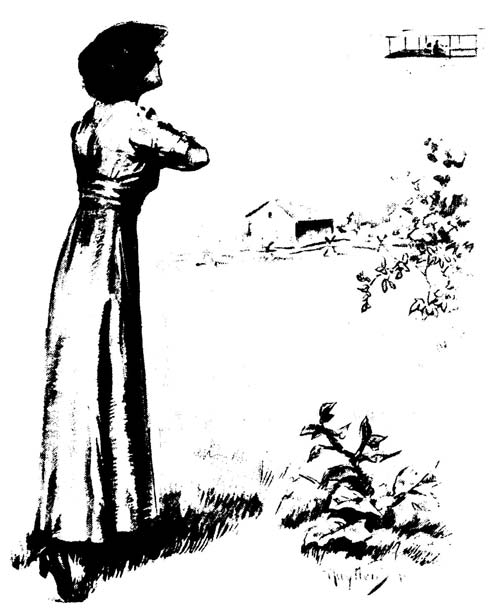 The sun was just beginning to rise over the orange grove. The deathly silence that succeeded the wreck of the aircraft was only broken by the irregular, spasmodic whirr of the motors, which were still going. Orissa, white and cold, crept in among the debris and shut down the engines. Then, slowly and reluctantly, she approached the motionless form of her brother.

To be alone at such a time and place was dreadful. A few steps from Steve she halted; then turned and fled toward the garden in sudden panic. Away from the horrid scene her courage and presence of mind speedily returned. She caught up a bucket of water that stood in the shed and lugged it back to the pasture.

Was Steve dead? She leaned over him, dreading to place her hand upon his heart, gazing piteously into his set, unresponsive face.

A rush across the springing turf.

Orissa straightened up, yelled like an Indian and made a run for the fence that did full credit to her athletic training.

For Marston’s big bull was coming—a huge, tawny creature with a temper that would shame tobasco. He swerved as if to follow the fleeing girl, but then the draggled planes of the aircraft 66defied him and he changed his mind to charge this new and unknown enemy—perhaps with the same disposition that Don Quixote attacked the windmill.

Orissa shrieked again, for the enormous beast bounded directly over Steve’s prostrate body and with bowed head and tail straight as a pointer dog’s rushed at the aëroplane. The sails shivered, collapsed, rolled in billows like the waves of the ocean, and amid them the struggling bull went down, tangled himself in the wires and became a helpless prisoner.

The girl, who was sobbing hysterically, heard herself laugh aloud and was inexpressibly shocked. The bull bellowed with rage but was so wound around with guy-wires that this was the extent of his power. Turning her eyes from the beast to Steve she gave a shout of joy, for her brother was sitting up and rubbing his leg with one hand and his head with the other, while he stared bewildered at the wreck of his aëroplane, from which the head of the bull protruded.

Orissa ran up, wringing her hands, and asked:

“I—I’ve gone crazy!” he answered, despairingly. “Seems as if the aircraft was transformed into the mummy of a—a—brute beast! Don’t laugh, Ris. Wh—what’s wrong with me—with my eyes? Tell me!”

She threw herself down upon the grass and laughed until she cried, Steve’s reproachful glances having no particle of effect in restraining her. When at last she could control herself she sat up and wiped her eyes, saying:

“Forgive me, dear, it’s—it’s so funny! But,” suddenly grave and anxious, “are you badly hurt? Is anything—broken?”

“Nothing but my heart,” he replied dolefully.

“Just look at that mess!” he wailed, pointing to the aircraft. “What has happened to it?”

“The bull,” she answered. “But don’t be discouraged, dear; the thing flew beautifully.”

“No; the aircraft. But as for the bull, I’m bound to say he did his best. How in the world shall we get him out of there, Steve?”

So she told him the whole story, Stephen sighing and shaking his head as he glared at the bull and the bull glared at him. Afterward the boy made an effort to rise, and Orissa leaned down and assisted him. When he got to his feet she held him until he grew stronger and could stand alone.

“I’m so grateful you were not killed,” his sister 68whispered. “Nothing else matters since you have so miraculously escaped.”

“Killed?” said Steve; “why, it was only a tumble, Ris. But the bull is a more serious complication. I suppose the aircraft was badly damaged, from what you say, before the bull got it; but now it’s a hopeless mess.”

“Oh, no,” she returned, encouragingly. “If he hasn’t smashed the motor we won’t mind the rest of the damage. Do you think we can untangle him?”

They approached the animal, who by this time was fully subdued and whined apologetically to be released. Steve got his nippers and cut wire after wire until suddenly the animal staggered to his feet, gave a terrified bellow and dashed down the field with a dozen yards of plane cloth wound around his neck.

Steve was examining the wreck. He tested the motors and found that neither the fall nor the bull had damaged them in the least. But there was breakage enough, aside from this, to make him groan disconsolately.

“The flight was wonderful,” commented his sister, watching his face anxiously. “Nothing could work more perfectly than the Kane Aircraft 69did until—until—the final descent. What caused the rocking, Steve?”

“A fault of the lateral balance. My automatic device refused to work, and before I knew it I had lost control.”

She stood gazing thoughtfully down at the wreck. Her brother had really invented a flying machine, of that there was no doubt. She had seen it fly—seen it soar miles through the air—and knew that a certain degree of success had been obtained. There was something wrong, to be sure; there usually is with new inventions; but wrongs can be righted.

“I’ve succeeded in a lot of things,” her brother was saying, reflectively. “The engines, the propeller and elevator are all good, and decided improvements on the old kinds. The starting device works beautifully and will soon be applied to every airship made. Only the automatic balance failed me, and I believe I know how to remedy that fault.”

“Do you suppose the machine can be rebuilt?” she asked.

“Assuredly. And the automatic balance perfected. The trouble is, Orissa, it will take a lot more money to do it, and we’ve already spent the last cent we could raise. It’s hard luck. Here is a certain fortune within our grasp, if we could 70perfect the thing, and our only stumbling block is the lack of a few dollars.”

Having reviewed in her mind all the circumstances of Steve’s successful flight the girl knew that he spoke truly. Comparing the aircraft with other machines she had seen and studied at the aviation meet she believed her brother’s invention was many strides in advance of them all.

“The question of securing the money is something we must seriously consider,” she said. “In some way it will be raised, of course. But just now our chief problem is how to get this ruin back to the hangar.”

“That will be my job,” declared Steve, his courage returning. “There are few very big pieces left to remove, and by taking things apart I shall be able to get it all into the shed. The day’s doings are over, Ris. Get breakfast and then go to your work. After I’ve stored this rubbish I’ll take a run into town myself, and look for a job. The aviation jig is up—for the present, at least.”

“Don’t do anything hurriedly, Steve,” protested the girl. “Work on the aircraft for a day or two, just as if we had money to go ahead with. That will give me time to think. To-night, when I come home, we will talk of this again.”