It was the morning of the tenth of December that the eager little group assembled at dawn on Marston’s pasture to witness the test of the Kane Aircraft.

Steve was so occupied with his final adjustments and anxiety lest he should overlook some important point, that he never thought of danger. He would not have remembered even his goggles had not Orissa handed them to him and told him to put them on.

This was the first time Mr. Cumberford had witnessed a performance of the aëroplane, yet he was much less excited than his daughter, who could not withdraw her gaze from the device and was nervously attentive to every move that the young aviator made. Orissa, confident of the result, was most composed of all.

When all was ready Steve took his seat, started the motors, and when they had acquired full speed threw in the clutch. The aëroplane ran less than fifty feet on its wheels before it began to rise, 123when it steadily soared into the air and mounted to an elevation of several hundred feet. By this time the aviator, who had kept a straight course, was half a dozen miles from the starting point; but now he made a wide circle and, returning, passed over Marston’s pasture at the same high altitude.

The speed of the aircraft was marvelous. Mr. Cumberford declared it was making a mile a minute, which estimate was probably correct. After circling for a while Steve descended to a hundred feet in a straight dive, holding the device in perfect control and maintaining at all times an exact balance. At a hundred feet he tested the rudders thoroughly, proving he could alter his course at will, make sharp turns and circle in a remarkably small space. Then, having been in the air twenty-seven minutes by the watch, he descended to the ground, rolled a hundred feet on his running gear and came to a halt a few paces away from the silent, fascinated group of watchers.

Not a hitch had occurred. The Kane Aircraft was as perfect a creation as its inventor had planned it to be.

Orissa gave Steve a kiss when he alighted, but said not a word. Sybil impulsively seized the aviator’s hands and pressed them until he flushed 124red. Mr. Cumberford lighted a fresh cigarette, nodded approvingly and said:

“All right, Steve. It—interests me.”

“It almost seemed alive,” remarked Steve, with pardonable exuberance. “Why, I believe it would fly bottom-side-up, if I asked it to!”

“Only one or two, and those unimportant. The steering-wheel is too loose and needs tightening. The left guy-wires are a bit too taut and need to be relieved. Half an hour’s tinkering and the aircraft will be as perfect as I know how to make it.”

As they were wheeling it back to the hangar, Sybil asked:

“Weren’t you frightened, Mr. Kane, when you were so high above the earth?”

“Oh, no; it is far safer a mile up than it is fifty or a hundred feet. There are no dangerous air currents to contend with and the machine glides more smoothly the more air it has underneath it. When I am near the earth I sometimes get a little nervous, but never when I’m far up.”

“But suppose you should fall from that distance?”

“Fall? Oh, but you can’t fall very easily with this sort of a biplane. At any angle it’s a kind of a parachute, you know, for the hinged ends automatically spread themselves against the air pressure. And as for a tumble, you know that a fall of fifty feet would kill one as surely as a fall of several hundred feet. If a fellow can manage to stick to his aëroplane he’s pretty safe.” 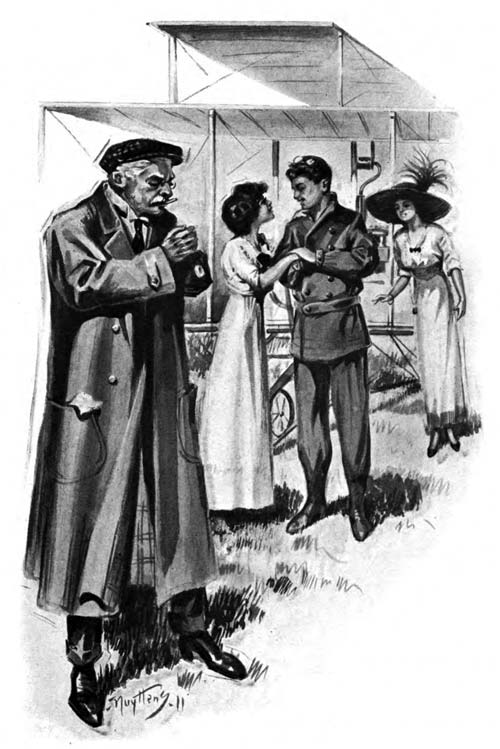 “It seems such a frail thing,” observed Sybil, musingly.

“Just wooden ribs and canvas,” laughed Steve; “but anything stronger would be unnecessary, and therefore foolish.”

“Now, then,” said Mr. Cumberford, when the aircraft rested once more upon its rack, “I’ve something to tell you, Kane. I’ve known it for several days, but refrained from speaking until you had made your trial.”

There was an ominous suggestion in the words. Steve turned and looked at him questioningly.

“Time will determine if it’s bad or good. Anyhow, it’s news. Burthon is building an aircraft.”

“I said an aircraft.”

“But that word designates only my own machine.”

“Burthon is building your machine.”

Steve stared at him, doubtful if he heard aright. Orissa stood motionless, growing white and red by turns. Sybil’s lips curled in a sneer as she said:

“My clever uncle! What a resourceful man he is.”

“It’s simple enough,” replied Cumberford. “Burthon sent to Washington for copies of your plans and specifications, has built a hangar and workshop over South Pasadena way, and employed a clever mechanic from Cleveland to superintend the construction—already well under way.”

“How do you know this, sir?” inquired Steve, breathless.

“The clever mechanic from Cleveland is my own man, who has been my confidential agent for years.”

“And you permit him to do this work!” cried the young man, indignantly.

“To be sure. If Brewster loses the job, some one will get it who is not my agent. It is the only way I can keep accurate account of what Burthon is up to.”

They were all silent for a time while they considered this startling information. By and by Cumberford said:

“Burthon has joined the Aëro Club, has donated a handsome cup for the best endurance flight during the coming meet at Dominguez, and in some 127way has made himself so popular with the officials that he has been appointed a member of the committee on arrangements. I dropped in at the Club yesterday, for I’m a member, and made this discovery. My scheming brother-in-law has some dusky, deep laid plan, and is carrying it out with particular attention to detail.”

“Do you think it concerns us, sir?” asked Orissa, anxiously.

“Yes. It isn’t extraordinary that Burthon should take a fancy to aviation. He is full of fads and fancies, and such a thing is liable to interest him. It interests me. But the meat in the nut is the fact that he is building a copy of the Kane Aircraft, merely adding a few details which he will declare are improvements.”

“Can’t we issue an injunction and stop him?” asked Steve.

“I’ve seen a lawyer about that. We can’t prove infringement at this stage of the game and it would be folly to attempt it. Burthon’s plan is to exhibit his machine first, then keep yours off the field during the meet and afterward claim that you are infringing upon his rights. He has organized a stock company, keeping most of the stock himself, has entered his device in all the aviation tournaments throughout the country, and is issuing a circular offering the machines for sale. 128I have a hand proof, fresh from the printer, of this circular.”

“Who will be his aviator?” asked Steve, with puckered brows.

“His former chauffeur, Mr. Totham Tyler, is one. He is now looking for another, also.”

“What can we do?” he asked in a bewildered tone.

“Checkmate him,” was the composed reply.

“Well, we know pretty well all Burthon’s plans. He doesn’t suspect we know a thing; believes he will be able to keep his secret until his aëroplane is ready and he can announce it in the newspapers and create a sensation. He has concocted a very pretty trick. Until this date no one has ever heard of the Kane Aircraft. After the Burthon Improved Biplane is exploited and its praise on every tongue, you won’t be able to get even a hearing with your invention, much less a chance to fly it.”

Steve sat down and covered his face with his hands. His attitude was one of despair.

“When will Mr. Burthon’s machine be finished?” asked Orissa, thoughtfully.

“He expects to make the first trial a week from to-morrow. He has kept a force of expert men at 129work, and they haven’t attempted to make the Kane engines, but are using a type that has worked successfully in many biplanes. So his machine has grown into existence very quickly.”

“A week from to-morrow,” repeated Orissa, softly. “And Steve is ready to-day.”

Steve looked up quickly. Sybil laughed at him.

“You silly boy,” said she. “Can’t you understand what Daddy means by a checkmate?”

Steve turned to Mr. Cumberford, who was lighting a fresh cigarette.

“If you will place the matter in my hands,” said that gentleman, “I will proceed to put a spoke in Burthon’s wheel, so to speak. Heretofore, Steve, I have been a mere onlooker, a—an interested friend, I may say. At this juncture you’d better make me your manager.”

“Would you accept the position?” asked the boy.

“Yes; there isn’t much else to interest me just now, and—I hate Burthon.”

“On what terms will you undertake this, sir?” Steve inquired, with anxiety.

“Why, I may have to spend a lot of money; probably will; and my time’s valuable; when I’m not here I’m moping at the Alexandria Hotel; so I propose you give me ten per cent of your profits for the first three years.”

130“That is absurd, sir,” declared Steve. “There will be little profit at first, and ten per cent of it wouldn’t amount to anything.”

Mr. Cumberford smiled—a grim smile that was one of his peculiarities.

“It’ll do, Steve. I’ll make it pay me well, see if I don’t. But you may add to the demand, if you like, by promising to present my daughter the fourth complete Kane Aircraft your factory turns out.”

“No, the fourth. We want the first three to go where they’ll advertise us. Is it a bargain, Mr. Kane?”

“Of course, sir,” he replied gratefully. “I’m not sure we can defeat Mr. Burthon’s conspiracy, but I know you will do all that is possible. And thank you, sir,” he added, again pressing the elder man’s hand.

Orissa took Mr. Cumberford’s hand next. She did not express her gratitude in words, but the man understood her and to hide his embarrassment began to search for his cigarette case. As for Sybil, she regarded the scene with an amused smile, and there was a queer look in her dark eyes.

“Now,” said Orissa, “let us go in to breakfast. You must all be nearly famished.”

131“Yes; let us eat, so that I can get back to town,” agreed Mr. Cumberford, cheerfully. “The campaign begins this very morning, and it may take a few people by surprise. Remember, Steve, you’re to stand ready to carry out any plans your manager makes.”