Chapter XXIII - A Battle in the Air 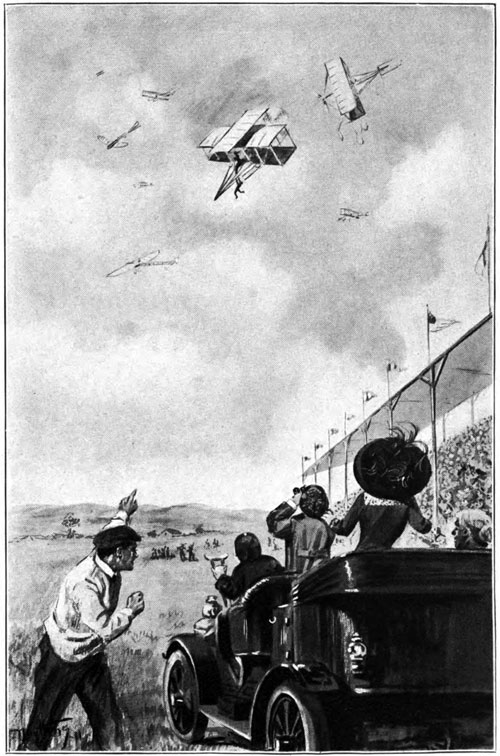 “What is she doing now?” asked Mrs. Kane, anxiously.

“Soaring in the air about half a mile high and a half mile to the northward,” replied Steve.

“And performing wonders,” added Sybil, with enthusiasm. “I had no idea the aircraft could be controlled so perfectly.”

“Nor I,” admitted the young inventor, modestly. “It really seems like a thing of life under her management, and I am sure I could not have exhibited its good points half as well as little Ris is doing.”

“Are any other aëroplanes flying?” Mrs. Kane inquired.

“Oh, yes,” said Sybil. “There are several in the air, doing really marvelous things; but all seem to keep away from Orissa and are more to the south of us. There’s one, though!” she added suddenly. “Isn’t that an aëroplane coming from the far north, Steve?”

193He looked carefully through the field glasses he held.

“Why—yes! It surely is an aëroplane. But how did it get over there?” he exclaimed. “I’ve been watching the other contestants, and they’re all near by. Who can it be?”

Sybil had glasses, too, and she focussed them on the approaching airship.

“It looks very much like Uncle Burthon’s imitation of the aircraft,” she murmured.

“By Jove! That’s what it is!” cried Steve. “How dare he fly it, after it has been withdrawn?”

“Uncle Burthon will dare anything,” she retorted, coldly. “But he is making the mistake of his life to-day—if that is really his aëroplane.”

“Why, he’s driving straight toward Orissa,” said Steve, indignantly. “What is the fellow trying to do—bump the aircraft?”

Sybil laid a warning hand on his arm and glanced into the blind woman’s startled face.

“Orissa is all right,” she announced in calm tones.

But Orissa did not seem all right to Steve, who was growing excessively nervous; nor even to Sybil, whose face was stern and set as she watched the maneuvers of the two craft through her powerful glasses.

194“It’s Tyler,” she said softly, meaning that the little chauffeur was operating Burthon’s device. Steve nodded, and thereafter they were silent.

Swift as a dart the Burthon aëroplane approached Orissa, who was deliberately circling this way and that as she glided through the air. She saw it coming, but at first paid little heed, thinking Tyler intended to pass by. But he altered his course to keep his machine headed directly for her and in gravely examining the approaching craft the girl noticed two slender steel blades projecting from his front elevator, like extended sword blades. They were slightly upcurved at the points, and while Orissa marveled to see such things attached to an aëroplane the thought occurred to her that if those blades struck her planes they would rend the cloth to shreds and destroy their sustaining surfaces. In that case one result was inevitable—a sudden drop to earth, and death.

Even as this thought crossed her mind the Burthon aëroplane came driving toward her at full speed. Filled with dismay she could only stare helplessly until the thing was so near that she could distinctly see the scowling face and glaring eyes of Tyler, intent on mischief. Then, without realizing her action, she caused the aircraft to duck, and the other swept over her so 195closely that Tyler’s running gear almost scraped her planes.

Orissa’s machine rolled alarmingly a moment, but she quickly regained control and then looked to see where Tyler was. He had turned and again was swooping toward her, at a slight downward angle. Orissa ascended to escape him, now realizing the man’s wicked determination to destroy the aircraft, and Tyler, displaying unexpected skill, altered his course to follow her.

The girl, thoroughly alarmed, now turned to flee, scarcely realizing what she did. Tyler followed like some huge bird of prey and, curiously enough, gained upon the Kane Aircraft. The two sets of engines were chugging away steadily, all the propellers revolving like clockwork, while the two rival aëroplanes answered obediently the slightest movements of their rudders.

Finding a straight flight would not permit her to escape her enemy, the girl swerved and began circling widely. After her came Tyler, the wicked looking blades that protruded from his elevator gleaming menacingly in the sunlight, his features distorted by hate and murderously determined.

In the circles Orissa seemed able to keep her distance, but the poor child was so bewildered by this pitiless attack that her head was in a whirl and only by instinct could she handle the levers and wheel to guide her flight.

196Tyler now observed several aëroplanes approaching at full speed, and realized he must end the chase quickly or be driven from his prey and prevented from carrying out his diabolical design. He made a quick turn to head off Orissa’s circle and the dreadful blades almost touched her lower plane as she dodged them. Tyler swept round again, but in his eagerness forgot his balance. Perhaps the man relied too much on the automatic device that had once brought Stephen to grief; anyway his aëroplane developed a side motion that nearly shook him from his seat. He tried in vain to restore the balance. The jar caused the motors to slip; the engines stopped dead; with a rending sound the huge planes collapsed and the wreck of Burthon’s biplane began to sink downward. Tyler was pitched headlong from his seat, but caught a rail and clung to it desperately as with ever increasing speed the fall to earth continued.

Orissa had witnessed the accident and with the sudden transition from danger to safety the girl’s wits returned and she regained her coolness. As she saw Tyler falling to his death, a quick conception of the situation inspired her to action. The Kane Aircraft suddenly tipped and began one of those tremendous dives through space which it had accomplished earlier in the day. Orissa’s aëroplane was absolutely under control, even at this thrilling moment, while the wreck to which Tyler clung was somewhat restrained in its fall by the mass of fluttering canvas and splintered bows. Although the weight of its engines and tanks dragged it swiftly down, Orissa’s aircraft dove much more rapidly. Five hundred feet above the earth she overtook Tyler, guided her aëroplane dangerously close to the man, and cried out to him to seize it. He may not have heard or understood her, but an instinct of self-preservation such as leads a drowning man to grasp at a straw induced him to clutch her footrail, and at the same moment Orissa turned the machine, so as not to become entangled in the wreck, and began a more gradual descent, the little chauffeur dangling from her footrail while, alert and masterful, the girl controlled her overladen craft.

Down, down they came, and thirty thousand pair of startled, wondering eyes followed them as if entranced. Orissa had not looked to see where she would land, for until this moment she had been so thoroughly occupied with the chase and the rescue of her enemy that she never once glanced toward the ground. But the hand of fate was guiding our brave young aviator. Her aircraft, maintaining a safe angle, settled directly upon Dominguez Field, where Tyler released his hold 198and rolled unconscious upon the ground. Orissa’s machine sped forward on its running gear and came to a stop just before the crowded grand stand.

No one who witnessed that exciting event will ever forget the mad shouts that rent the air when the Kane Aircraft, safe from its battle in the clouds, came to rest just in front of the gasping throng that had watched it with a fascination akin to horror. A hundred eager onlookers surrounded the machine, plucked the aviator from her seat and held her aloft for all to see, while the discovery that a young girl was the heroine of the terrible adventure caused them to marvel anew.

The applause redoubled; men shouted until they were hoarse; women wept, laughed hysterically and waved their handkerchiefs; everyone stood up to applaud; thousands crowded the field about Orissa, who by this time was herself softly crying, until Stephen, white as a ghost, directed his man to run the motor car through the crowd to his sister’s side and assist her aboard.

Mr. Cumberford took no part in this ovation. He was rushing about the field, flinging everyone out of his way with mad excitement and asking continually: “Where is he? Where is Tyler? What has become of him?”

No one heeded him for a time, as every eye was 199on Orissa, every individual striving to get near her, to touch her—as if she had been a goddess whose hand could confer untold blessings and remedy the ills of the world. But after a while Cumberford found a man who deigned to give him the desired information.

“The fellow who was rescued?” he said. “Oh, he fainted dead away the minute he touched solid ground.”

“And what became of him?” demanded Cumberford.

“Why, the crowd wanted to mob him, it seemed, and I guess that faint was the only thing that saved him from being torn to pieces.”

“Then a tall young fellow grabbed him up, chucked him into an automobile and got away with him.”

“How the blazes do I know, stranger? I only saw them get away, that’s all.”

This information was later confirmed by several others, but Orissa’s manager was unable to learn who had taken Tyler away or where they had gone. Cumberford was in an ugly mood, his heart throbbing with a fierce desire for vengeance. Tyler had escaped him for the moment but he vowed he would never rest until both Burthon and his chauffeur were behind the bars.

200He was still pursuing his futile inquiries when Brewster approached him and said his daughter, with Stephen, Orissa and their mother, awaited him at the hangar, which was besieged by an excited throng. Directing the man to look after the aircraft and get it safely housed, he hurried away and managed to squeeze through the mass of humanity surrounding the hangar and gain admittance.

Within he found Orissa the center of a group of aviators who were earnestly congratulating the girl on her escape and flooding her with compliments and praise for her skillful handling of the aëroplane. They were noble fellows, these professional aviators, and unselfish enough to be honestly enthusiastic over Miss Kane’s performances. The girl’s beauty and modesty won them at once, and adding these charming qualities to her cleverness and bravery, to-day fully proven, it is not difficult to understand why Orissa Kane from this moment became a prime favorite with every disciple of aviation.

Just now, however, Orissa was embarrassed and a little distressed by all this laudation, following the spirited ovation tendered her by the public at large, so her nerves were beginning to fail her when by good fortune Mr. Cumberford appeared. He saw at once her condition and without 201stopping to add a word of praise or congratulation managed to hurry her out of the back entrance, past the surging crowd that was even here in evidence, and into their automobile. The others of the party followed with less difficulty and soon they were all headed for town and speeding swiftly along the roadway.