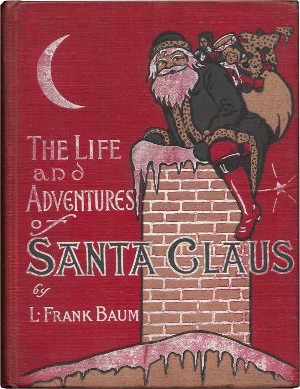 The Life and Adventures of Santa Claus

L. Frank Baum's The Life and Adventures of Santa Claus chronicles Santa in three sections: his youth in the Burzee forest, manhood and the great battle of good and evil, and old age, his deputies, and the mantle of immortality. Published in 1902, illustrated by Mary Cowles Clark, Baum's book was adapted into a graphic novel, anime series, and most notably, was the last stop-motion animagic Christmas special from Rankin-Bass (1985). As Santa says, "In all this world, there is nothing so beautiful as a happy child!"

MANHOOD - 2 - How Claus Made the First Toy

MANHOOD - 3 - How the Ryls Colored the Toys

MANHOOD - 5 - How Bessie Blithesome Came to the Laughing Valley

MANHOOD - 6 - The Wickedness of Awgwas

MANHOOD - 7 - The Great Battle Between Good and Evil

MANHOOD - 8 - The First Journey with the Reindeer

MANHOOD - 11 - How the First Stockings Were Hung by the Chimneys

OLD AGE - 1 - The Mantle of Immortality