When Rob became interested in electricity his clear-headed father considered the boy's fancy to be instructive as well as amusing; so he heartily encouraged his son, and Rob never lacked batteries, motors or supplies of any sort that his experiments might require.

He fitted up the little back room in the attic as his workshop, and from thence a net-work of wires soon ran throughout the house. Not only had every outside door its electric bell, but every window was fitted with a burglar alarm; moreover no one could cross the threshold of any interior room without registering the fact in Rob's workshop. The gas was lighted by an electric fob; a chime, connected with an erratic clock in the boy's room, woke the servants at all hours of the night and caused the cook to give warning; a bell rang whenever the postman dropped a letter into the box; there were bells, bells, bells everywhere, ringing at the right time, the wrong time and all the time. And there were telephones in the different rooms, too, through which Rob could call up the different members of the family just when they did not wish to be disturbed.

His mother and sisters soon came to vote the boy's scientific craze a nuisance; but his father was delighted with these evidences of Rob's skill as an electrician, and insisted that he be allowed perfect freedom in carrying out his ideas.

"Electricity," said the old gentleman, sagely, "is destined to become the motive[3] power of the world. The future advance of civilization will be along electrical lines. Our boy may become a great inventor and astonish the world with his wonderful creations."

"And in the meantime," said the mother, despairingly, "we shall all be electrocuted, or the house burned down by crossed wires, or we shall be blown into eternity by an explosion of chemicals!"

"Nonsense!" ejaculated the proud father. "Rob's storage batteries are not powerful enough to electrocute one or set the house on fire. Do give the boy a chance, Belinda."

"And his pranks are so humiliating," continued the lady. "When the minister called yesterday and rang the bell a big card appeared on the front door on which was printed the words: 'Busy; Call Again.' Fortunately Helen saw him and let him in, but when I reproved Robert for the act he said he was just trying the sign to see if it[4] would work."

"Exactly! The boy is an inventor already. I shall have one of those cards attached to the door of my private office at once. I tell you, Belinda, our son will be a great man one of these days," said Mr. Joslyn, walking up and down with pompous strides and almost bursting with the pride he took in his young hopeful.

Mrs. Joslyn sighed. She knew remonstrance was useless so long as her husband encouraged the boy, and that she would be wise to bear her cross with fortitude.

Rob also knew his mother's protests would be of no avail; so he continued to revel in electrical processes of all sorts, using the house as an experimental station to test the powers of his productions.

It was in his own room, however,—his "workshop"—that he especially delighted. For not only was it the center of all his numerous "lines" throughout the house, but he had rigged up therein a wonderful array of devices for his own amusement. A trolley-car moved around a circular track and stopped regularly at all stations; an engine and train of cars moved jerkily up and down a steep grade and through a tunnel; a windmill was busily pumping water from the dishpan into the copper skillet; a sawmill was in full operation and a host of mechanical blacksmiths, scissors-grinders, carpenters, wood-choppers and millers were connected with a motor which kept them working away at their trades in awkward but persevering fashion.

The room was crossed and recrossed with wires. They crept up the walls, lined the floor, made a grille of the ceiling and would catch an unwary visitor under the chin or above the ankle just when he least expected it. Yet visitors were forbidden in so crowded a room, and even his father declined to go farther than the doorway. As for Rob, he thought he knew all about the wires, and what each one was for; but they puzzled[6] even him, at times, and he was often perplexed to know how to utilize them all.

One day when he had locked himself in to avoid interruption while he planned the electrical illumination of a gorgeous pasteboard palace, he really became confused over the network of wires. He had a "switch-board," to be sure, where he could make and break connections as he chose; but the wires had somehow become mixed, and he could not tell what combinations to use to throw the power on to his miniature electric lights.

So he experimented in a rather haphazard fashion, connecting this and that wire blindly and by guesswork, in the hope that he would strike the right combination. Then he thought the combination might be right and there was a lack of power; so he added other lines of wire to his connections, and still others, until he had employed almost every wire in the room. 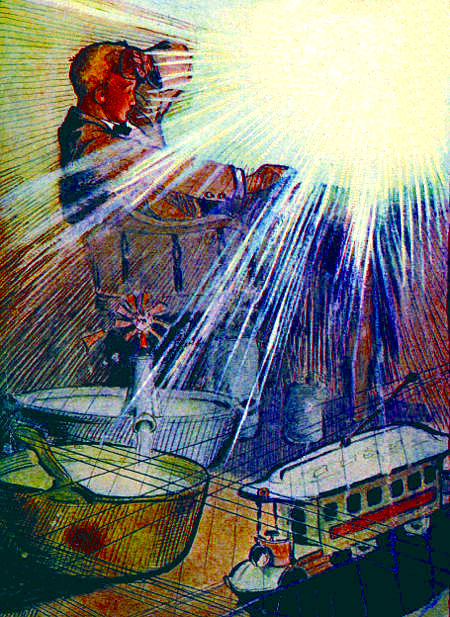 Yet it would not work; and after pausing a moment to try to think what was wrong he went at it again, putting this and that line into connection, adding another here and another there, until suddenly, as he made a last change, a quick flash of light almost blinded him, and the switch-board crackled ominously, as if struggling to carry a powerful current.

Rob covered his face at the flash, but finding himself unhurt he took away his hands and with blinking eyes attempted to look at a wonderful radiance which seemed to fill the room, making it many times brighter than the brightest day.

Although at first completely dazzled, he peered before him until he discovered that the light was concentrated near one spot, from which all the glorious rays seemed to scintillate.

He closed his eyes a moment to rest them; then re-opening them and shading them somewhat with his hands, he made out the form of a curious Being standing with majesty[8] and composure in the center of the magnificent radiance and looking down upon him!