There is little doubt that had this strange experience befallen a grown man he would have been stricken with a fit of trembling or a sense of apprehension, or even fear, at the thought of having faced the terrible Demon of Electricity, of having struck the Master Key of the world's greatest natural forces, and finding himself possessed of three such wonderful and useful gifts. But a boy takes everything as a matter of course. As the tree of knowledge sprouts and expands within him, shooting out leaf after leaf of practical experience, the succession of surprises dulls his faculty of wonderment. It takes a great deal to startle a boy.

Rob was full of delight at his unexpected good fortune; but he did not stop to consider that there was anything remarkably queer or uncanny in the manner in which it had come to him. His chief sensation was one of pride. He would now be able to surprise those who had made fun of his electrical craze and force them to respect his marvelous powers. He decided to say nothing about the Demon or the accidental striking of the Master Key. In exhibiting to his friends the electrical devices he had acquired it would be "no end of fun" to mark their amazement and leave them to guess how he performed his feats.

So he put his treasures into his pocket, locked his workshop and went downstairs to his room to prepare for dinner.

While brushing his hair he remembered it was no longer necessary for him to eat ordinary food. He was feeling quite hungry at that moment, for he had a boy's ravenous appetite; but, taking the silver box from his pocket, he swallowed a tablet and at once felt his hunger as fully satisfied as if he had partaken of a hearty meal, while at the same time he experienced an exhilarating glow throughout his body and a clearness of brain and gaiety of spirits which filled him with intense gratification.

Still, he entered the dining-room when the bell rang and found his father and mother and sisters already assembled there.

"Where have you been all day, Robert?" inquired his mother.

"No need to ask," said Mr. Joslyn, with a laugh. "Fussing over electricity, I'll bet a cookie!"

"I do wish," said the mother, fretfully, "that he would get over that mania. It unfits him for anything else."

"Precisely," returned her husband, dishing the soup; "but it fits him for a great career when he becomes a man. Why shouldn't he spend his summer vacation in pursuit of useful knowledge instead of romping around like ordinary boys?"

"What!" exclaimed his father, looking at him in surprise, "it's your favorite soup."

"Are you ill, Robert?" asked his mother.

Yet Mrs. Joslyn looked worried, and when Rob refused the roast, she was really shocked.

"Let me feel your pulse, my poor boy!" she commanded, and wondered to find it so regular.

In fact, Rob's action surprised them all. He sat calmly throughout the meal, eating nothing, but apparently in good health and spirits, while even his sisters regarded[33] him with troubled countenances.

"Oh, no; I haven't," protested Rob; "but I've decided not to eat anything, hereafter. It's a bad habit, and does more harm than good."

"Wait till breakfast," said sister Helen, with a laugh; "you'll be hungry enough by that time."

However, the boy had no desire for food at breakfast time, either, as the tablet sufficed for an entire day. So he renewed the anxiety of the family by refusing to join them at the table.

"If this goes on," Mr. Joslyn said to his son, when breakfast was finished, "I shall be obliged to send you away for your health."

"I think of making a trip this morning," said Rob, carelessly.

"Oh, I may go to Boston, or take a run over to Cuba or Jamaica," replied the boy.

"But you can not go so far by yourself," declared his father; "and there is no one to go with you, just now. Nor can I spare the money at present for so expensive a trip."

"Oh, it won't cost anything," replied Rob, with a smile.

Mr. Joslyn looked upon him gravely and sighed. Mrs. Joslyn bent over her son with tears in her eyes and said:

"This electrical nonsense has affected your mind, dear. You must promise me to keep away from that horrid workshop for a time."

"I won't enter it for a week," he answered. "But you needn't worry about me. I haven't been experimenting with electricity all this time for nothing, I can tell you. As for my health, I'm as well and strong as any boy need be, and there's nothing wrong with my head, either. Common folks always think great men are crazy,[35] but Edison and Tesla and I don't pay any attention to that. We've got our discoveries to look after. Now, as I said, I'm going for a little trip in the interests of science. I maybe back to-night, or I may be gone several days. Anyhow, I'll be back in a week, and you mustn't worry about me a single minute."

"How are you going?" inquired his father, in the gentle, soothing tone persons use in addressing maniacs.

"Through the air," said Rob.

"I don't need a balloon," returned the boy. "That's a clumsy way of traveling, at best. I shall go by electric propulsion."

"As you are my nearest relatives," continued Rob, not noticing these exclamations,[36] "I will allow you to come into the back yard and see me start. You will then understand something of my electrical powers."

They followed him at once, although with unbelieving faces, and on the way Rob clasped the little machine to his left wrist, so that his coat sleeve nearly hid it.

When they reached the lawn at the back of the house Rob kissed them all good-by, much to his sisters' amusement, and turned the indicator of the little instrument to the word "up."

Immediately he began to rise into the air.

Mrs. Joslyn, with a scream of terror, hid her face in her hands.

"He'll break his neck!" cried the astounded father, tipping back his head to look after his departing son. 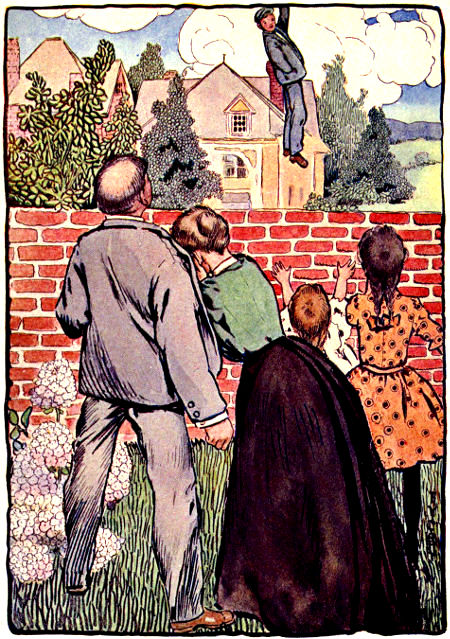 "Come back! Come back!" shouted the girls to the soaring adventurer.

"I will—some day!" was the far-away answer.

Having risen high enough to pass over the tallest tree or steeple, Rob put the indicator to the east of the compass-dial and at once began moving rapidly in that direction.

The sensation was delightful. He rode as gently as a feather floats, without any exertion at all on his own part; yet he moved so swiftly that he easily distanced a railway train that was speeding in the same direction.

"This is great!" reflected the youth. "Here I am, traveling in fine style, without a penny to pay any one! And I've enough food to last me a month in my coat pocket. This electricity is the proper stuff, after all! And the Demon's a trump, and no mistake. Whee-ee! How small everything looks down below there. The people are bugs, and the houses are soap-boxes, and the trees are like clumps of grass. I seem to be passing over a town. Guess I'll drop down a bit, and take in the sights."

He pointed the indicator to the word "down," and at once began dropping through the air. He experienced the sensation one feels while descending in an elevator. When he reached a point just above the town he put the indicator to the zero mark and remained stationary, while he examined the place. But there was nothing to interest him, particularly; so after a brief survey he once more ascended and continued his journey toward the east.

At about two o'clock in the afternoon he reached the city of Boston, and alighting unobserved in a quiet street he walked around for several hours enjoying the sights and wondering what people would think of him if they but knew his remarkable powers. But as he looked just like any other boy no one noticed him in any way.

It was nearly evening, and Rob had wandered down by the wharves to look at the shipping, when his attention was called to an ugly looking bull dog, which ran toward him and began barking ferociously.

"Get out!" said the boy, carelessly, and made a kick at the brute.

The dog uttered a fierce growl and sprang upon him with bared teeth and flashing red eyes. Instantly Rob drew the electric tube from his pocket, pointed it at the dog and pressed the button. Almost at the same moment the dog gave a yelp, rolled over once or twice and lay still.

"I guess that'll settle him," laughed the boy; but just then he heard an angry shout, and looking around saw a policeman running toward him.

"Kill me dog, will ye—eh?" yelled the officer; "well, I'll just run ye in for that same, an' ye'll spend the night in the lock-up!" And on he came, with drawn club in one hand and a big revolver in the other.

"You'll have to catch me first," said Rob, still laughing, and to the amazement[40] of the policeman he began rising straight into the air.

"Come down here! Come down, or I'll shoot!" shouted the fellow, flourishing his revolver.

Rob was afraid he would; so, to avoid accidents, he pointed the tube at him and pressed the button. The red-whiskered policeman keeled over quite gracefully and fell across the body of the dog, while Rob continued to mount upward until he was out of sight of those in the streets.

"That was a narrow escape," he thought, breathing more freely. "I hated to paralyze that policeman, but he might have sent a bullet after me. Anyhow, he'll be all right again in an hour, so I needn't worry."

It was beginning to grow dark, and he wondered what he should do next. Had he possessed any money he would have descended to the town and taken a bed at a hotel, but he had left home without a single penny. Fortunately the nights were warm[41] at this season, so he determined to travel all night, that he might reach by morning some place he had never before visited.

Cuba had always interested him, and he judged it ought to lie in a southeasterly direction from Boston. So he set the indicator to that point and began gliding swiftly toward the southeast.

He now remembered that it was twenty-four hours since he had eaten the first electrical tablet. As he rode through the air he consumed another. All hunger at once left him, while he felt the same invigorating sensations as before.

After a time the moon came out, and Rob amused himself gazing at the countless stars in the sky and wondering if the Demon was right when he said the world was the most important of all the planets.

But presently he grew sleepy, and before he realized what was happening he had fallen into a sound and peaceful slumber, while the indicator still pointed to the southeast and he continued to move rapidly through the cool night air.