"I have seen the folly of sending you into the world with an offensive instrument, yet with no method of defense," resumed the Demon, presently. "You have knocked over a good many people with that tube during the past week."

"I know," said Rob; "but I couldn't help it. It was the only way I had to protect myself."

"Therefore my next gift shall be this Garment of Protection. You must wear it underneath your clothing. It has power to accumulate and exercise electrical repellent force. Perhaps you do not know what that[87] means, so I will explain more fully. When any missile, such as a bullet, sword or lance, approaches your person, its rush through the air will arouse the repellent force of which I speak, and this force, being more powerful than the projective force, will arrest the flight of the missile and throw it back again. Therefore nothing can touch your person that comes with any degree of force or swiftness, and you will be safe from all ordinary weapons. When wearing this Garment you will find it unnecessary to use the electric tube except on rare occasions. Never allow revenge or animosity to influence your conduct. Men may threaten, but they can not injure you, so you must remember that they do not possess your mighty advantages, and that, because of your strength, you should bear with them patiently."

Rob examined the garment with much curiosity. It glittered like silver, yet was soft and pliable as lamb's wool. Evidently[88] the Demon had prepared it especially for his use, for it was just Rob's size.

"Now," continued the Demon, more gravely, "we approach the subject of an electrical device so truly marvelous that even I am awed when I contemplate the accuracy and perfection of the natural laws which guide it and permit it to exercise its functions. Mankind has as yet conceived nothing like it, for it requires full knowledge of electrical power to understand even its possibilities."

The Being paused, and drew from an inner pocket something resembling a flat metal box. In size it was about four inches by six, and nearly an inch in thickness.

"What is it?" asked Rob, wonderingly.

"It is an automatic Record of Events," answered the Demon.

"I will explain to you its use," returned the Demon, "although the electrical forces[89] which operate it and the vibratory currents which are the true records must remain unknown to you until your brain has mastered the higher knowledge of electricity. At present the practical side of this invention will be more interesting to you than a review of its scientific construction.

"Suppose you wish to know the principal events that are occurring in Germany at the present moment. You first turn this little wheel at the side until the word 'GERMANY' appears in the slot at the small end. Then open the top cover, which is hinged, and those passing events in which you are interested will appear before your eyes."

The Demon, as he spoke, opened the cover, and, looking within, the boy saw, as in a mirror, a moving picture before him. A regiment of soldiers was marching through the streets of Berlin, and at its head rode a body of horsemen, in the midst of which was the Emperor himself. The[90] people who thronged the sidewalks cheered and waved their hats and handkerchiefs with enthusiasm, while a band of musicians played a German air, which Rob could distinctly hear.

While he gazed, spell-bound, the scene changed, and he looked upon a great warship entering a harbor with flying pennants. The rails were lined with officers and men straining their eyes for the first sight of their beloved "Vaterland" after a long foreign cruise, and a ringing cheer, as from a thousand throats, came faintly to Rob's ear.

Again the scene changed, and within a dingy, underground room, hemmed in by walls of stone, and dimly lighted by a flickering lamp, a body of wild-eyed, desperate men were plighting an oath to murder the Emperor and overthrow his government.

"Anarchists!" answered the Demon, with a faint sneer, and he shut the cover of the[91] Record with a sudden snap.

"It's wonderful!" cried the boy, with a sigh that was followed by a slight shiver.

"The Record is, indeed, proof within itself of the marvelous possibilities of electricity. Men are now obliged to depend upon newspapers for information; but these can only relate events long after they have occurred. And newspaper statements are often unreliable and sometimes wholly false, while many events of real importance are never printed in their columns. You may guess what an improvement is this automatic Record of Events, which is as reliable as Truth itself. Nothing can be altered or falsified, for the vibratory currents convey the actual events to your vision, even as they happen."

"But suppose," said Rob, "that something important should happen while I'm asleep, or not looking at the box?"

"I have called this a Record," replied the Demon, "and such it really is, although[92] I have shown you only such events as are in process of being recorded. By pressing this spring you may open the opposite cover of the box, where all events of importance that have occurred throughout the world during the previous twenty-four hours will appear before you in succession. You may thus study them at your leisure. The various scenes constitute a register of the world's history, and may be recalled to view as often as you desire."

"It's—it's like knowing everything," murmured Rob, deeply impressed for perhaps the first time in his life.

"It is knowing everything," returned the Demon; "and this mighty gift I have decided to entrust to your care. Be very careful as to whom you permit to gaze upon these pictures of passing events, for knowledge may often cause great misery to the human race."

"I'll be careful," promised the boy, as he took the box reverently within his own[93] hands.

"The third and last gift of the present series," resumed the Demon, "is one no less curious than the Record of Events, although it has an entirely different value. It is a Character Marker."

"I will explain. Perhaps you know that your fellow-creatures are more or less hypocritical. That is, they try to appear good when they are not, and wise when in reality they are foolish. They tell you they are friendly when they positively hate you, and try to make you believe they are kind when their natures are cruel. This hypocrisy seems to be a human failing. One of your writers has said, with truth, that among civilized people things are seldom what they seem."

"On the other hand," continued the Demon, "some people with fierce countenances are kindly by nature, and many who[94] appear to be evil are in reality honorable and trustworthy. Therefore, that you may judge all your fellow-creatures truly, and know upon whom to depend, I give you the Character Marker. It consists of this pair of spectacles. While you wear them every one you meet will be marked upon the forehead with a letter indicating his or her character. The good will bear the letter 'G', the evil the letter 'E'. The wise will be marked with a 'W' and the foolish with an 'F'. The kind will show a 'K' upon their foreheads and the cruel a letter 'C'. Thus you may determine by a single look the true natures of all those you encounter."

"And are these, also, electrical in their construction?" asked the boy, as he took the spectacles.

"Certainly. Goodness, wisdom and kindness are natural forces, creating character. For this reason men are not always to blame for bad character, as they acquire it unconsciously.[95] All character sends out certain electrical vibrations, which these spectacles concentrate in their lenses and exhibit to the gaze of their wearer, as I have explained."

"It is a fact that has always existed, but is now utilized for the first time."

"With these gifts, and the ones you acquired a week ago, you are now equipped to astound the world and awaken mankind to a realization of the wonders that may be accomplished by natural forces. See that you employ these powers wisely, in the interests of science, and do not forget your promise to exhibit your electrical marvels only to those who are most capable of comprehending them."

"Then adieu until a week from to-day, when I will meet you here at this hour and[96] bestow upon you the last three gifts which you are entitled to receive. Good-by!"

"Good-by!" repeated Rob, and in a gorgeous flash of color the Demon disappeared, leaving the boy alone in the room with his new and wonderful possessions. 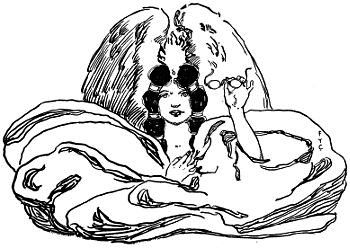