Chapter XI - The Man of Science

Rob passed the remainder of the day wandering about London and amusing himself by watching the peculiar ways of the people. When it became so dark that there was no danger of his being observed, he rose through the air to the narrow slit in the church tower and lay upon the floor of the little room, with the bells hanging all around him, to pass the night.

He was just falling asleep when a tremendous din and clatter nearly deafened him, and set the whole tower trembling. It was the midnight chime.

Rob clutched his ears tightly, and when the vibrations had died away descended by the ladder to a lower platform. But even here the next hourly chime made his ears ring, and he kept descending from platform to platform until the last half of a restless night was passed in the little room at the bottom of the tower.

When, at daylight, the boy sat up and rubbed his eyes, he said, wearily: "Churches are all right as churches; but as hotels they are rank failures. I ought to have bunked in with my friend, King Edward."

He climbed up the stairs and the ladders again and looked out the little window in the belfry. Then he examined his map of Europe.

"I believe I'll take a run over to Paris," he thought. "I must be home again by Saturday, to meet the Demon, so I'll have to make every day count."

Without waiting for breakfast, since he had eaten a tablet the evening before, he[128] crept through the window and mounted into the fresh morning air until the great city with its broad waterway lay spread out beneath him. Then he sped away to the southeast and, crossing the channel, passed between Amiens and Rouen and reached Paris before ten o'clock.

Near the outskirts of the city appeared a high tower, upon the flat roof of which a man was engaged in adjusting a telescope. Upon seeing Rob, who was passing at no great distance from this tower, the man cried out:

Then he waved his hands frantically in the air, and fairly danced with excitement. So the boy laughed and dropped down to the roof where, standing beside the Frenchman, whose eyes were actually protruding from their sockets, he asked, coolly:

The other was for a moment speechless. He was a tall, lean man, having a bald head but a thick, iron-gray beard, and his black eyes sparkled brightly from behind a pair of gold-rimmed spectacles. After attentively regarding the boy for a time he said, in broken English: 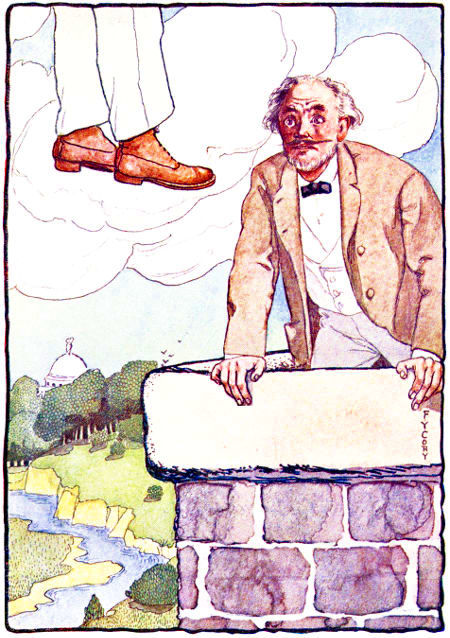 Rob guessed that here was his opportunity to do the Demon a favor by explaining his electrical devices to this new acquaintance, who was evidently a man of science.

"Here is the secret, Professor," he said, and holding out his wrist displayed the traveling machine and explained, as well as he could, the forces that operated it.

The Frenchman, as you may suppose, was greatly astonished, and to show how perfectly the machine worked Rob turned the indicator and rose a short distance above the tower, circling around it before he rejoined the professor on the roof. Then he[130] showed his food tablets, explaining how each was stored with sufficient nourishment for an entire day.

The scientist positively gasped for breath, so powerful was the excitement he experienced at witnessing these marvels.

"Eet is wonderful—grand—magnifique!" he exclaimed.

"But here is something of still greater interest," continued Rob, and taking the Automatic Record of Events from his pocket he allowed the professor to view the remarkable scenes that were being enacted throughout the civilized world.

The Frenchman was now trembling violently, and he implored Rob to tell him where he might obtain similar electrical machines.

"I can't do that," replied the boy, decidedly; "but, having seen these, you may be able to discover their construction for yourself. Now that you know such things to be possible and practical, the hint should be sufficient to enable a shrewd electrician to prepare duplicates of them."

The scientist glared at him with evident disappointment, and Rob continued:

"These are not all the wonders I can exhibit. Here is another electrical device that is, perhaps, the most remarkable of any I possess."

He took the Character Marking spectacles from his pocket and fitted them to his eyes. Then he gave a whistle of surprise and turned his back upon his new friend. He had seen upon the Frenchman's forehead the letters "E" and "C."

"Guess I've struck the wrong sort of scientist, after all!" he muttered, in a disgusted tone.

His companion was quick to prove the accuracy of the Character Marker. Seeing the boy's back turned, he seized a long iron bar that was used to operate the telescope, and struck at Rob so fiercely that had he not worn the Garment of Protection his[132] skull would have been crushed by the blow. As it was, the bar rebounded with a force that sent the murderous Frenchman sprawling upon the roof, and Rob turned around and laughed at him.

"It won't work, Professor," he said. "I'm proof against assassins. Perhaps you had an idea that when you had killed me you could rob me of my valuable possessions; but they wouldn't be a particle of use to a scoundrel like you, I assure you! Good morning."

Before the surprised and baffled scientist could collect himself sufficiently to reply, the boy was soaring far above his head and searching for a convenient place to alight, that he might investigate the charms of this famed city of Paris.

It was indeed a beautiful place, with many stately buildings lining the shady boulevards. So thronged were the streets that Rob well knew he would soon be the[133] center of a curious crowd should he alight upon them. Already a few sky-gazers had noted the boy moving high in the air, above their heads, and one or two groups stood pointing their fingers at him.

Pausing at length above the imposing structure of the Hotel Anglais, Rob noticed at one of the upper floors an open window, before which was a small iron balcony. Alighting upon this he proceeded to enter, without hesitation, the open window. He heard a shriek and a cry of "Au voleur!" and caught sight of a woman's figure as she dashed into an adjoining room, slamming and locking the door behind her.

"I don't know as I blame her," observed Rob, with a smile at the panic he had created. "I s'pose she takes me for a burglar, and thinks I've climbed up the lightning rod."

He soon found the door leading into the hallway and walked down several flights of[134] stairs until he reached the office of the hotel.

"How much do you charge a day?" he inquired, addressing a fat and pompous-looking gentleman behind the desk.

The man looked at him in a surprised way, for he had not heard the boy enter the room. But he said something in French to a waiter who was passing, and the latter came to Rob and made a low bow.

"I speak ze Eengliss ver' fine," he said. "What desire have you?"

"What are your rates by the day?" asked the boy.

"How many dollars is that?"

"All right; I can stay about a day before I go bankrupt. Give me a room."

"Certainement, M'sieur. Have you ze luggage?"

"No; but I'll pay in advance," said Rob, and began counting out his dimes and nickles and pennies, to the unbounded amazement of the waiter, who looked as if he had never seen such coins before.

He carried the money to the fat gentleman, who examined the pieces curiously, and there was a long conference between them before it was decided to accept them in payment for a room for a day. But at this season the hotel was almost empty, and when Rob protested that he had no other money the fat gentleman put the coins into his cash box with a resigned sigh and the waiter showed the boy to a little room at the very top of the building.

Rob washed and brushed the dust from his clothes, after which he sat down and amused himself by viewing the pictures that constantly formed upon the polished plate of the Record of Events.