While following the shifting scenes of the fascinating Record Rob noted an occurrence that caused him to give a low whistle of astonishment and devote several moments to serious thought.

"I believe it's about time I interfered with the politics of this Republic," he said, at last, as he closed the lid of the metal box and restored it to his pocket. "If I don't take a hand there probably won't be a Republic of France very long and, as a good American, I prefer a republic to a monarchy."

Then he walked down-stairs and found his English-speaking waiter.

"Ze President! Ah, he is wiz his mansion. To be at his residence, M'sieur."

"Where is his residence?"

The waiter began a series of voluble and explicit directions which so confused the boy that he exclaimed:

"Oh, much obliged!" and walked away in disgust.

Gaining the street he approached a gendarme and repeated his question, with no better result than before, for the fellow waved his arms wildly in all directions and roared a volley of incomprehensible French phrases that conveyed no meaning whatever.

"If ever I travel in foreign countries again," said Rob, "I'll learn their lingo in advance. Why doesn't the Demon get up a conversation machine that will speak all languages?"

By dint of much inquiry, however, and after walking several miles following ambiguous directions, he managed to reach the residence of President Loubet. But there he was politely informed that the President was busily engaged in his garden, and would see no one.

"That's all right," said the boy, calmly. "If he's in the garden I'll have no trouble finding him."

Then, to the amazement of the Frenchmen, Rob shot into the air fifty feet or so, from which elevation he overlooked a pretty garden in the rear of the President's mansion. The place was protected from ordinary intrusion by high walls, but Rob descended within the enclosure and walked up to a man who was writing at a small table placed under the spreading branches of a large tree.

"Is this President Loubet?" he inquired, with a bow.

The gentleman looked up.

"My servants were instructed to allow no one to disturb me," he said, speaking in excellent English.

"It isn't their fault; I flew over the wall," returned Rob. "The fact is," he added, hastily, as he noted the President's frown, "I have come to save the Republic; and I haven't much time to waste over a bundle of Frenchmen, either."

"Your name!" he demanded, sharply.

Rob drew the Record from his pocket and placed it upon the table.

"This, sir," said he, "is an electrical device that records all important events. I wish to call your attention to a scene enacted in Paris last evening which may have an effect upon the future history of your country."

He opened the lid, placed the Record so that the President could see clearly, and[140] then watched the changing expressions upon the great man's face; first indifference, then interest, the next moment eagerness and amazement.

"Mon Dieu!" he gasped; "the Orleanists!"

"Yes; they've worked up a rather pretty plot, haven't they?"

The President did not reply. He was anxiously watching the Record and scribbling notes on a paper beside him. His face was pale and his lips tightly compressed.

Finally he leaned back in his chair and asked:

"Can you reproduce this scene again?"

"Certainly, sir," answered the boy; "as often as you like."

"Will you remain here while I send for my minister of police? It will require but a short time."

"Call him up, then. I'm in something of a hurry myself, but now I've mixed up[141] with this thing I'll see it through." 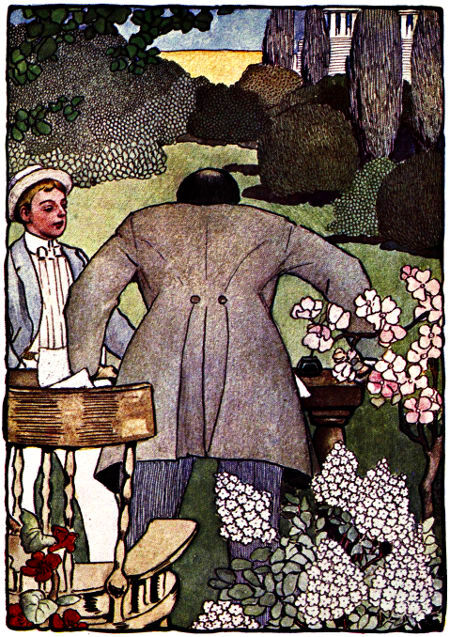 The President touched a bell and gave an order to his servant. Then he turned to Rob and said, wonderingly:

"That's true, Mr. President," was the answer; "but an American boy, you must remember. That makes a big difference, I assure you."

"This is your invention?" he asked.

"No; I'm hardly equal to that. But the inventor has made me a present of the Record, and it's the only one in the world."

"It is a marvel," remarked the President, thoughtfully. "More! It is a real miracle. We are living in an age of wonders, my young friend."

"No one knows that better than myself, sir," replied Rob. "But, tell me, can you trust your chief of police?"

"I think so," said the President, slowly; "yet since your invention has shown me[142] that many men I have considered honest are criminally implicated in this royalist plot, I hardly know whom to depend upon."

"Then please wear these spectacles during your interview with the minister of police," said the boy. "You must say nothing, while he is with us, about certain marks that will appear upon his forehead; but when he has gone I will explain those marks so you will understand them."

The President covered his eyes with the spectacles.

"Why," he exclaimed, "I see upon your own brow the letters—"

"Stop, sir!" interrupted Rob, with a blush; "I don't care to know what the letters are, if it's just the same to you."

The President seemed puzzled by this speech, but fortunately the minister of police arrived just then and, under Rob's guidance, the pictured record of the Orleanist plot was reproduced before the startled eyes of the official.

"And now," said the boy, "let us see if any of this foolishness is going on just at present."

He turned to the opposite side of the Record and allowed the President and his minister of police to witness the quick succession of events even as they occurred.

Suddenly the minister cried, "Ha!" and, pointing to the figure of a man disembarking from an English boat at Calais, he said, excitedly:

"That, your Excellency, is the Duke of Orleans, in disguise! I must leave you for a time, that I may issue some necessary orders to my men; but this evening I shall call to confer with you regarding the best mode of suppressing this terrible plot."

When the official had departed, the President removed the spectacles from his eyes and handed them to Rob.

"What did you see?" asked the boy.

"Then you may trust him fully," declared Rob, and explained the construction of the Character Marker to the interested and amazed statesman.

"And now I must go," he continued, "for my stay in your city will be a short one and I want to see all I can."

The President scrawled something on a sheet of paper and signed his name to it, afterward presenting it, with a courteous bow, to his visitor.

"This will enable you to go wherever you please, while in Paris," he said. "I regret my inability to reward you properly for the great service you have rendered my country; but you have my sincerest gratitude, and may command me in any way."

"Oh, that's all right," answered Rob. "I thought it was my duty to warn you, and if you look sharp you'll be able to break up this conspiracy. But I don't want any reward. Good day, sir."

He turned the indicator of his traveling machine and immediately rose into the air, followed by a startled exclamation from the President of France.

Moving leisurely over the city, he selected a deserted thoroughfare to alight in, from whence he wandered unobserved into the beautiful boulevards. These were now brilliantly lighted, and crowds of pleasure seekers thronged them everywhere. Rob experienced a decided sense of relief as he mixed with the gay populace and enjoyed the sights of the splendid city, for it enabled him to forget, for a time, the responsibilities thrust upon him by the possession of the Demon's marvelous electrical devices.