When Rob opened the front door he came face to face with Nell, who gave an exclamation of joy and threw herself into his arms.

"Oh, Rob!" she cried, "I'm so glad you've come. We have all been dreadfully worried about you, and mother—"

"Well, what about mother?" inquired the boy, anxiously, as she paused.

"She's been very ill, Rob; and the doctor said to-day that unless we heard from you soon he would not be able to save her life. The uncertainty about you is killing her."

Rob stood stock still, all the eager joy of his return frozen into horror at the thought that he had caused his dear mother so much suffering.

"Where is she, Nell?" he asked, brokenly.

Rob followed with beating heart, and soon was clasped close to his mother's breast.

"Oh, my boy—my dear boy!" she murmured, and then for very joy and love she was unable to say more, but held him tight and stroked his hair gently and kissed him again and again.

Rob said little, except to promise that he would never again leave home without her full consent and knowledge. But in his mind he contrasted the love and comfort that now surrounded him with the lonely and unnatural life he had been leading and,[227] boy though he was in years, a mighty resolution that would have been creditable to an experienced man took firm root in his heart.

He was obliged to recount all his adventures to his mother and, although he made light of the dangers he had passed through, the story drew many sighs and shudders from her.

When luncheon time arrived he met his father, and Mr. Joslyn took occasion to reprove his son in strong language for running away from home and leaving them filled with anxiety as to his fate. However, when he saw how happy and improved in health his dear wife was at her boy's return, and when he had listened to Rob's manly confession of error and expressions of repentance, he speedily forgave the culprit and treated him as genially as ever. 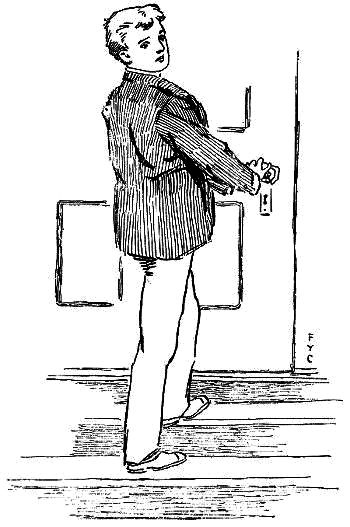 Of course the whole story had to be repeated, his sisters listening this time with open eyes and ears and admiring their adventurous brother immensely. Even Mr. Joslyn could not help becoming profoundly interested, but he took care not to show any pride he might feel in his son's achievements.

When his father returned to his office Rob went to his own bed-chamber and sat for a long time by the window in deep thought. When at last he aroused himself, he found it was nearly four o'clock.

"The Demon will be here presently," he said, with a thrill of aversion, "and I must be in the workshop to receive him."

Silently he stole to the foot of the attic stairs and then paused to listen. The house seemed very quiet, but he could hear his mother's voice softly humming a cradle-song that she had sung to him when he was a baby.

He had been nervous and unsettled and a little fearful until then, but perhaps the sound of his mother's voice gave him courage, for he boldly ascended the stairs and entered the workshop, closing and locking the door behind him.