Ample proof of Rob's careless and restless nature having been frankly placed before the reader in these pages, you will doubtless be surprised when I relate that during the next few hours our young gentleman suffered from a severe attack of homesickness, becoming as gloomy and unhappy in its duration as ever a homesick boy could be.

Perhaps he himself did not know what gave him this horrible attack of "the blues," but the truth is he took out his handkerchief and cried like a baby from very loneliness and misery.

There was no one to see him, thank goodness! and the tears gave him considerable relief. He dried his eyes, made an honest struggle to regain his cheerfulness, and then muttered to himself:

"If I stay up here, like an air-bubble in the sky, I shall certainly go crazy. I suppose there's nothing but water to look at down below, but if I could only sight a ship,[194] or even see a fish jump, it would do me no end of good."

Thereupon he descended until, as the ocean's surface came nearer and nearer, he discovered a tiny island lying almost directly underneath him. It was hardly big enough to make a dot on the biggest map, but a clump of trees grew in the central portion, while around the edges were jagged rocks protecting a sandy beach and a stretch of flower-strewn upland leading to the trees.

It looked very beautiful from Rob's elevated position, and his spirits brightened at once.

"I'll drop down and pick a bouquet," he exclaimed, and a few moments later his feet touched the firm earth of the island.

But before he could gather a dozen of the brilliant flowers a glad shout reached his ears, and, looking up, he saw two men running towards him from the trees.

They were dressed in sailor fashion, but their clothing was reduced to rags and[195] scarcely clung to their brown, skinny bodies. As they advanced they waved their arms wildly in the air and cried in joyful tones:

Rob stared at them wonderingly, and had much ado to prevent the poor fellows from hugging him outright, so great was their joy at his appearance. One of them rolled upon the ground, laughing and crying by turns, while the other danced and cut capers until he became so exhausted that he sank down breathless beside his comrade.

"How came you here?" then inquired the boy, in pitying tones.

"We're shipwrecked American sailors from the bark 'Cynthia Jane,' which went down near here over a month ago," answered the smallest and thinnest of the two. "We escaped by clinging to a bit of wreckage and floated to this island, where we have nearly starved to death. Indeed, we now have eaten everything on the island[196] that was eatable, and had your boat arrived a few days later you'd have found us lying dead upon the beach!"

Rob listened to this sad tale with real sympathy.

The men sprang to their feet with white, scared faces.

"No;" he answered. "I flew here through the air." And then he explained to them the wonderful electric traveling machine.

But the sailors had no interest whatever in the relation. Their disappointment was something awful to witness, and one of them laid his head upon his comrade's shoulder and wept with unrestrained grief, so weak and discouraged had they become through suffering. 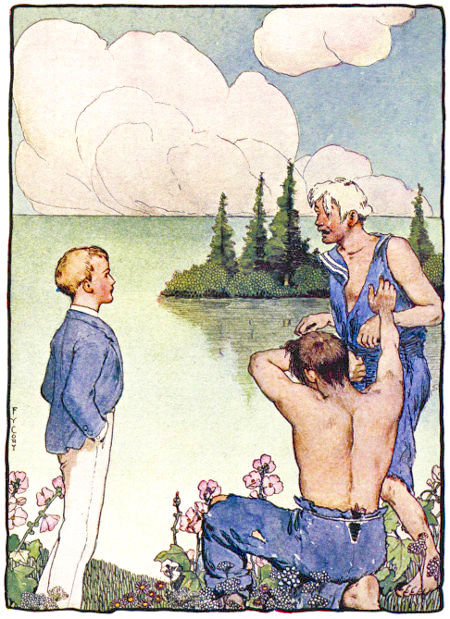 Suddenly Rob remembered that he could assist them, and took the box of concentrated food tablets from his pocket.

"Eat these," he said, offering one to each of the sailors.

At first they could not understand that these small tablets would be able to allay the pangs of hunger; but when Rob explained their virtues the men ate them greedily. Within a few moments they were so greatly restored to strength and courage that their eyes brightened, their sunken cheeks flushed, and they were able to converse with their benefactor with calmness and intelligence.

Then the boy sat beside them upon the grass and told them the story of his acquaintance with the Demon and of all his adventures since he had come into possession of the wonderful electric contrivances. In his present mood he felt it would be a relief to confide in some one, and so these poor, lonely men were the first to hear his[198] story.

When he related the manner in which he had clung to the Turk while both ascended into the air, the elder of the two sailors listened with rapt attention, and then, after some thought, asked:

"Why couldn't you carry one or both of us to America?"

Rob took time seriously to consider this idea, while the sailors eyed him with eager interest. Finally he said:

"I'm afraid I couldn't support your weight long enough to reach any other land. It's a long journey, and you'd pull my arms out of joint before we'd been up an hour."

Their faces fell at this, but one of them said:

"Why couldn't we swing ourselves over your shoulders with a rope? Our two bodies would balance each other and we are so thin and emaciated that we do not[199] weigh very much."

While considering this suggestion Rob remembered how at one time five pirates had clung to his left leg and been carried some distance through the air.

"No," was the answer; "but there are plenty of long, tough vines growing on the island that are just as strong and pliable as ropes."

"Then, if you are willing to run the chances," decided the boy, "I will make the attempt to save you. But I must warn you that in case I find I can not support the weight of your bodies I shall drop one or both of you into the sea."

They looked grave at this prospect, but the biggest one said:

"We would soon meet death from starvation if you left us here on the island; so, as there is at least a chance of our being able to escape in your company I, for one, am[200] willing to risk being drowned. It is easier and quicker than being starved. And, as I'm the heavier, I suppose you'll drop me first."

This announcement seemed to be an encouragement to the little sailor, but he said, nervously:

"I hope you'll keep near the water, for I haven't a good head for heights—they always make me dizzy."

"But I do! I do! I do!" cried the little man, interrupting him. "I shall die if you leave me behind!"

They ran to the trees, around the trunks of which were clinging many tendrils of greenish-brown vine which possessed remarkable strength. With their knives they[201] cut a long section of this vine, the ends of which were then tied into loops large enough to permit the sailors to sit in them comfortably. The connecting piece Rob padded with seaweed gathered from the shore, to prevent its cutting into his shoulders.

The sailors squatted in the loops, and Rob swung the vine over his shoulders and turned the indicator of the traveling machine to "up."

As they slowly mounted into the sky the little sailor gave a squeal of terror and clung to the boy's arm; but the other, although seemingly anxious, sat quietly in his place and made no trouble.

"Well, s'pose we should?" answered Rob, gruffly. "You couldn't drown until[202] you struck the water, so the higher we are the longer you'll live in case of accident."

This phase of the question seemed to comfort the frightened fellow somewhat; but, as he said, he had not a good head for heights, and so continued to tremble in spite of his resolve to be brave.

The weight on Rob's shoulders was not so great as he had feared, the traveling machine seeming to give a certain lightness and buoyancy to everything that came into contact with its wearer.

As soon as he had reached a sufficient elevation to admit of good speed he turned the indicator once more to the east and began moving rapidly through the air, the shipwrecked sailors dangling at either side.

"This is aw—aw—awful!" gasped the little one.

"Say, you shut up!" commanded the boy, angrily. "If your friend was as big a coward as you are I'd drop you both this minute. Let go my arm and keep quiet,[203] if you want to reach land alive."

The fellow whimpered a little, but managed to remain silent for several minutes. Then he gave a sudden twitch and grabbed Rob's arm again.

"S'pose—s'pose the vine should break!" he moaned, a horrified look upon his face.

"I've had about enough of this," said Rob, savagely. "If you haven't any sense you don't deserve to live." He turned the indicator on the dial of the machine and they began to descend rapidly.

The little fellow screamed with fear, but Rob paid no attention to him until the feet of the two suspended sailors were actually dipping into the waves, when he brought their progress to an abrupt halt.

"Wh—wh—what are you g—g—going to do?" gurgled the cowardly sailor.

"I'm going to feed you to the sharks—unless you promise to keep your mouth shut," retorted the boy. "Now, then; decide at once! Which will it be—sharks or[204] silence?"

"I won't say a word—'pon my honor, I won't!" said the sailor, shudderingly.

"All right; remember your promise and we'll have no further trouble," remarked Rob, who had hard work to keep from laughing at the man's abject terror.

Once more he ascended and continued the journey, and for several hours they rode along swiftly and silently. Rob's shoulders were beginning to ache with the continued tugging of the vine upon them, but the thought that he was saving the lives of two unfortunate fellow-creatures gave him strength and courage to persevere.

Night was falling when they first sighted land; a wild and seemingly uninhabited stretch of the American coast. Rob made no effort to select a landing place, for he was nearly worn out with the strain and anxiety of the journey. He dropped his burden upon the brow of a high bluff overlooking the sea and, casting the vine from his shoulders, fell to the earth exhausted and half fainting. 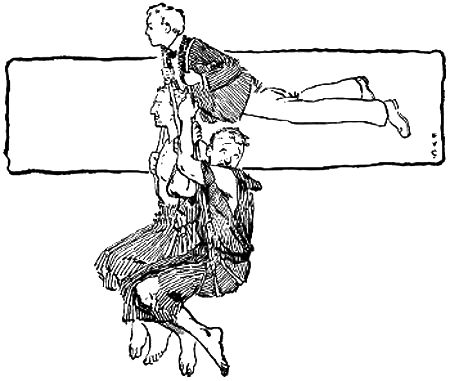