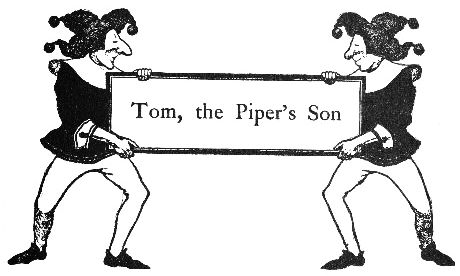 Tom, Tom, the piper's son,
Stole a pig and away he run;
The pig was eat and Tom was beat
And Tom ran crying down the street.

There was not a worse vagabond in Shrewsbury than old Barney the piper. He never did any work except to play the pipes, and he played so badly that few pennies ever found their way into his pouch. It was whispered around that old Barney was not very honest, but he was so sly and cautious that no one had ever caught him in the act of stealing, although a good many things had been missed after they had fallen into the old man's way.

Barney had one son, named Tom; and they lived all alone in a little hut away at the end of the village street, for Tom's mother had died when he was a baby. You may not suppose that Tom was a very good boy, since he had such a queer father; but neither was he very bad, and the worst fault he had was in obeying his father's wishes when Barney wanted him to steal a chicken for their supper or a pot of potatoes for their breakfast. Tom did not like to steal, but he had no one to teach him to be honest, and so, under his father's guidance, he fell into bad ways.

Tom, Tom, the piper's son,
Was hungry when the day begun;
He wanted a bun and asked for one,
But soon found out that there were none.

"What shall we do?" he asked his father

"Go hungry," replied Barney, "unless you want to take my pipes and play in the village. Perhaps they will give you a penny."

"No," answered Tom, shaking his head; "no one will give me a penny for playing; but Farmer Bowser might give me a penny to stop playing, if I went to his house. He did last week, you know."

"You 'd better try it," said his father; "it 's mighty uncomfortable to be hungry."

So Tom took his father's pipes and walked over the hill to Farmer Bowser's house; for you must know that

Tom, Tom, the piper's son,
Learned to play when he was young;
But the only tune that he could play
Was "Over the hills and far away."

And he played this one tune as badly as his father himself played, so that the people were annoyed when they heard him, and often begged him to stop.

When he came to Farmer Bowser's house, Tom started up the pipes and began to play with all his might. The farmer was in his woodshed, sawing wood, so he did not hear the pipes; and the farmer's wife was deaf, and could not hear them. But a little pig that had strayed around in front of the house heard the noise, and ran away in great fear to the pigsty.

Then, as Tom saw the playing did no good, he thought he would sing also, and therefore he began bawling, at the top of his voice,

"Over the hills, not a great ways off,
The woodchuck died with the whooping-cough!"

The farmer had stopped sawing to rest, just then; and when he heard the singing he rushed out of the shed, and chased Tom away with a big stick of wood. The boy went back to his father, and said, sorrowfully, for he was more hungry than before,

"The farmer gave me nothing but a scolding; but there was a very nice pig running around the yard."

"How big was it?" asked Barney.

"Oh, just about big enough to make a nice dinner for you and me."

The piper slowly shook his head;
"'T is long since I on pig have fed,
And though I feel it 's wrong to steal,
Roast pig is very nice," he said.

Tom knew very well what he meant by that, so he laid down the pipes, and went back to the farmer's house.

When he came near he heard the farmer again sawing wood in the woodshed, and so he went softly up to the pig-sty and reached over and grabbed the little pig by the ears. The pig squealed, of course, but the farmer was making so much noise himself that he did not hear it, and in a minute Tom had the pig tucked under his arm and was running back home with it.

The piper was very glad to see the pig, and said to Tom,

"You are a good son, and the pig is very nice and fat. We shall have a dinner fit for a king."

It was not long before the piper had the pig killed and cut into pieces and boiling in the pot. Only the tail was left out, for Tom wanted to make a whistle of it, and as there was plenty to eat besides the tail his father let him have it.

The piper and his son had a fine dinner that day, and so great was their hunger that the little pig was all eaten up at one meal!

Then Barney lay down to sleep, and Tom sat on a bench outside the door and began to make a whistle out of the pig's tail with his pocket-knife.

Now Farmer Bowser, when he had finished sawing the wood, found it was time to feed the pig, so he took a pail of meal and went to the pigsty. But when he came to the sty there was no pig to be seen, and he searched all round the place for a good hour without finding it.

"Piggy, piggy, piggy!" he called, but no piggy came, and then he knew his pig had been stolen. He was very angry, indeed, for the pig was a great pet, and he had wanted to keep it till it grew very big.

So he put on his coat and buckled a strap around his waist, and went down to the village to see if he could find out who had stolen his pig.

Up and down the street he went, and in and out the lanes, but no traces of the pig could he find anywhere. And that was no great wonder, for the pig was eaten by that time and its bones picked clean.

Finally the farmer came to the end of the street where the piper lived in his little hut, and there he saw Tom sitting on a bench and blowing on a whistle made from a pig's tail.

"Where did you get that tail?" asked the farmer.

"I found it," said naughty Tom, beginning to be frightened.

"Let me see it," demanded the farmer; and when he had looked at it carefully he cried out,

"This tail belonged to my little pig, for I know very well the curl at the end of it! Tell me, you rascal, where is the pig?"

Then Tom fell in a tremble, for he knew his wickedness was discovered.

"The pig is eat, your honor," he answered.

The farmer said never a word, but his face grew black with anger, and, unbuckling the strap that was about his waist, he waved it around his head, and whack! came the strap over Tom's back.

"Ow, ow!" cried the boy, and started to run down the street.

Whack! whack! fell the strap over his shoulder, for the farmer followed at his heels half-way down the street, nor did he spare the strap until he had give Tom a good beating. And Tom was so scared that he never stopped running until he came to the end of the village, and he bawled lustily the whole way and cried out at every step as if the farmer was still a his back.

It was dark before he came back to his home, and his father was still asleep; so Tom crept into the hut and went to bed. But he had received a good lesson and never after that could the old piper induce him to steal.

When Tom showed by his actions his intention of being honest he soon got a job of work to do, and before long he was able to earn a living more easily, and a great deal more honestly, than when he stole the pig to get a dinner and suffered a severe beating as a punishment.

Tom, Tom, the piper's son
Now with stealing pigs was done,
He 'd work all day instead of play,
And dined on tart and currant bun.

Return to the L. Frank Baum Home Page, or . . . Read the next short story; What Jack Horner Did