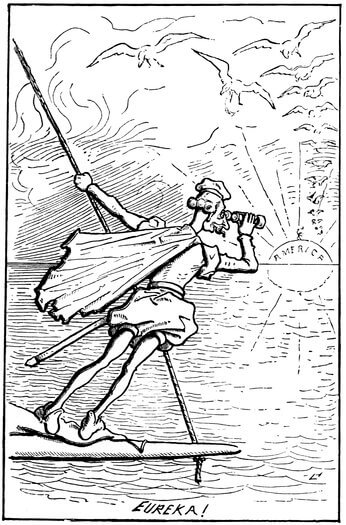 The sun was just sinking below the western horizon on the evening of September 11th, 1492, when a respectably dressed personage of sea-faring appearance might have been seen occupying an elevated position in the rigging of a Spanish ship, and gazing intently out over a vast expanse of salt water upon what at first sight appeared to be an apple dumpling of colossal proportions, but which upon more careful inspection subsequently turned out to be a NEW WORLD.

We will not keep the reader longer in suspense; that sea-faring man was Christopher Columbus, and the object which attracted his attention was America!

This adventurous person had sailed from the port of Palos, in Spain, on the 3d of August with the avowed purpose of “seeing the world;” and who, thinking he might as well see a new world while he was about it, sailed in the direction of America.

For further particulars the reader is referred to the accompanying sketch, which, with startling fidelity, portrays the scene at the thrilling moment when a new continent bursts upon the bold navigator’s vision. Pray cast your eye aloft and behold the great Christopher discovering America as hard as ever he can. The flashing eye, 16the dilating nostril, the heaving bosom, the trembling limbs, the thrilling nerves, the heroic pose, all vigorously set forth in a style which speaks volumes—nay, whole libraries for our artist’s graphic power and knowledge of anatomy. We will next trouble the reader to let the eye wander off to the dim distance, where the new world looms majestically up, and stands out boldly against the setting sun, previously alluded to, which illuminates the scene with golden splendor, and bathes the new born continent in a flood of dazzling light.

If the patient reader will be good enough to examine this picture with a powerful microscope, he will discover, standing upon the utmost prominence of the new world, and in imminent danger of falling off, a citizen of the country who welcomes the 17stranger with uplifted tomahawk and a wild war-whoop.

Lifting our eyes skyward we see the American eagle soaring forth to meet the great discoverer, with outstretched pinions, and bringing his whole family with him. We confess that we, for one, cannot gaze upon this scene without envying Mr. Columbus the luxury of his emotions and wishing we knew where there was a new world lying around loose that we might go right off and discover it.