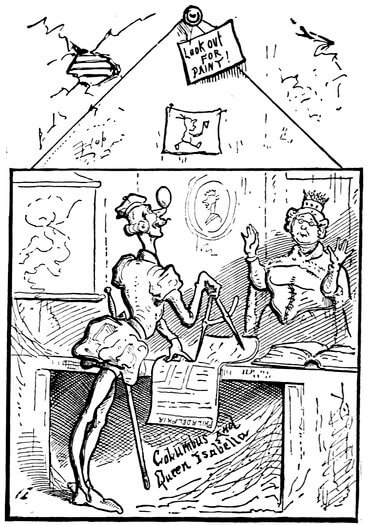 Christopher Columbus was born at Genoa in Italy, a country chiefly famous for its talented organ-grinders. The youthful Christopher soon made the melancholy discovery that he had no talent in that direction. His tastes then rather took a scientific turn. This was a sad blow to his fond parents, who did hope their son would take a turn at the hurdy-gurdy instead.

His aged father pointed out that Science 19was low and unprofitable, Geology was a humbug, Meteorology and Madness were synonymous terms, and Astronomy ought to be spelled with two S’s.

In vain his doting mother gently sought to woo him to loftier aims, and, in the fondness of a mother’s love, even presented him with a toy barrel-organ which played three bars of “Turn, sinner, turn,” in the hope that it might change the whole current of his life; but the undutiful child immediately traded it off to another boy for a bamboo fishing rod, out of which he constructed a telescope, and he used to lie upon his back for hours, far, far into the night, catching cold and scouring the heavens with this crude invention. One night his sorrow-stricken parents found him thus, and they knew from that moment that all was lost!

Our hero took to the water naturally very early in life. Let the youth of America remember this. Let the youth of every land who contemplate discovering new worlds remember that strong drink is fatal to the discovery business; for it is our candid opinion, that, had Christopher Columbus taken to, say strong coffee in his very earliest infancy, the chances are that America would never have had a Centennial, and these pages had never been written. Two circumstances which the stoutest heart among us cannot for a moment contemplate without a shudder.

When Columbus reached man’s estate he became a hard student, and spent the most of his time in his library,

“Reading books that never mortal Ever dared to read before.”

His mind, consequently, soared beyond the pale of mere existing facts and circumstances, and sought to fold its eager pinions on lofty roosting places yet undiscovered.

And thus it was, that, after revolving the matter in his mind for forty years or more, Columbus arrived at the conclusion that the earth was round, not flat, (as was the popular belief at that time,) and boldly said so in round terms. People called him a lunatic, an original character, and other harsh names, and otherwise pooh-pooh’d the idea.

But Columbus not only adhered to his theory, but went so far as to assert that by sailing due west from Europe you would, if you kept on sailing, bring up somewhere in eastern Asia.

“Oh, come now, Christopher! really, this 25is going to far!” is what public opinion said, and when our hero petitioned the Italian Congress to fit out an expedition and let him prove his theory, it magnanimously offered to set him up in business with a first-class barrel-organ and an educated monkey cashier on condition of his leaving the country once for all; but Columbus, expressing his regret for his lack of musical ability, declined this generous offer and turned with a sigh to other governments for assistance. Finally, after fifteen years of effort, he succeeded in convincing Queen Isabella of Spain that there was an undiscovered country beyond the seas, overflowing with milk and honey, which it would be worth while to “work up.” He proved his theory with the aid of an egg, (which he made stand on end,) 26an old Boston City Directory, and a ground plan of Philadelphia, (see school books,) and demonstrated to the good lady’s entire satisfaction that she might realize largely by fitting out an expedition and let him at its head go and discover it.

So conclusive were these arguments to the mind of Queen Isabella that the good old soul allowed him to fit out an expedition at his own expense, and gave him carte blanche to discover America as much as he wanted to. We have seen how well he succeeded. All this took place three hundred and eighty-three years, four months, and five days ago, but it seems to us but yesterday.