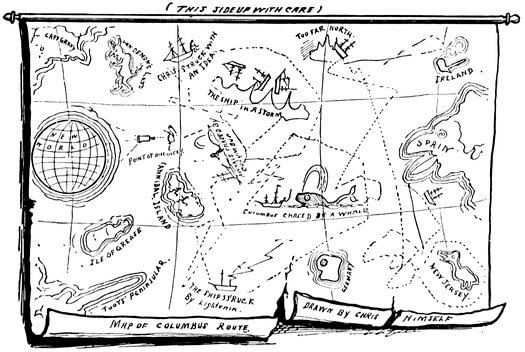 On the return of Columbus to Spain, he published a map of his voyage in one of the illustrated papers of the day. Through the courtesy of the publishers of that paper we are enabled to place this map before our readers.

Here it is translated from the original Spanish. If the gentle reader can make head or tail of it he is more gentle even than we had at first supposed. The publication of this map at the time naturally inspired others with the spirit of adventure, and discovering America became quite the rage. Indeed, so common were voyages of discovery to the New World, that only one besides that of Columbus is deemed of sufficient note to find a place in this history. We allude to that of Americus Vespucius.

This gentleman, who was a Florentine by birth, made a voyage to South America in 1499. He wrote sensational letters to the papers describing his voyage and the country, which were afterwards published in book form by a German geographer, who gave the name “America” to the New World, but this history cheerfully accords to [1]Christopher Columbus the imperishable glory of finding out the roosting-place of the American eagle.

1. Mr. Columbus is better known as the author of that soul-stirring melody, “Hail Columbia!”