Chapter IV - THE AUTHOR PROCEEDS TO SETTLE THE COUNTRY ITSELF 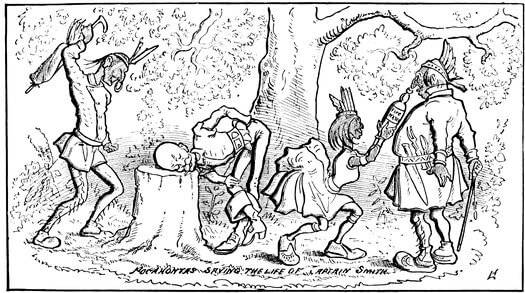 It was a century or more after the events narrated in the last chapter before any attempt was made to establish a colony in America, or before civilization got any permanent foothold. In 1606 a certain “London company” got out a patent on Virginia, and the next year sent over a ship-load of old bachelors to settle its claim. They landed at Jamestown in the month of May, and here the wretched outcasts went into lodgings for single gentlemen.

The whole country was a howling wilderness, overrun with Indians, wild beasts and Jersey mosquitoes.

These hardy pioneers had come to an unexplored region with a vague, general idea that they were to dig gold, trade with the Indians, get enormously rich and return home. So sanguine were they of speedy success that they planted nothing that year. The few sandwiches they had brought with them were soon consumed, the gold did not “pan out,” the Indians drove very hard bargains, offering a ready market for hair, but giving little or nothing in return.

To make matters worse, the Fevernager, a terrible disease of the period, got among them, and by fall only a handful of the colonists remained, and these were a very shaky lot indeed, with not clothing enough among them to wad a shot-gun.

Among this seedy band was one John Smith, who, being out of funds himself, and a public spirited person withal, saw that unless provisions could be obtained shortly, the scheme of colonizing America would be a failure.

He went into the lecture field, holding forth to large and fashionable audiences, composed of intelligent savages, upon the science of navigation, illustrating his lecture with an old mariner’s compass that indicated all four of the cardinal points at once, and a superannuated bulls-eye watch that 36would do nothing but tick. These simple-minded children of nature listened with attentive ears, and looked on with wondering eyes, and came down largely with green corn, sardines, silk hats, hard boiled eggs, fall overcoats, pickled oysters, red handkerchiefs, ice cream, dried herring, kid gloves, pickled tripe, and other Indian luxuries, which proved invaluable to the starving, threadbare colonists. Thus it is seen that Mr. Smith obtained on tick[2] what he had no cash to pay for.

2. The reader may occasionally find this sort of thing in these pages but he is entreated not to be startled.

Although Mr. Smith was regarded as a talented man from a scientific point of view, and was even mentioned in the native papers as undoubtedly a god, yet he was sometimes grossly misunderstood by these 37artless aborigines, and on one occasion they arrested him on a general charge of hocus-pocus or witchcraft, and carried him before Chief Justice Powhatan to be tried for his life.

The jury brought in a verdict of “guilty” on all the counts, and the hapless Smith was condemned to death. His counsel did all they could to establish an alibi, but in vain. It was a clear case; a fair trial had been given their pale brother and he must suffer the penalty. As a last resort, Mr. Smith offered, first, his bull’s-eye watch, and finally, the old mariner’s compass, for his life, but Judge Powhatan could not see the point. He had never seen a white man die, and was panting for a new sensation. He therefore ordered the entertainment to proceed without more delay.

38Having previously had his scalp removed, the doomed man thanked his captors for all their kindness, and requesting the executioner to make a good job of it, placed his head upon the fatal block. The dread instrument of death was uplifted, and Mr. Smith was really apprehensive that his time had come. He closed his eyes and whistled the plaintive air,

At this supreme moment Pocahontas, the beautiful and accomplished daughter of Judge Powhatan, appeared upon the scene, tastefully dressed as a ballet girl, and using 39some pretty strong arguments with her father, obtained from him a stay of proceedings, and the prisoner’s life was spared.

Powhatan apologized to Mr. Smith for the loss of his hair, and handsomely offered to buy him a wig. John admitted that it was rather a closer shave than he had been accustomed to, but at the same time he begged the learned gentleman not to mention it, and made the best of his way back to Jamestown laden with presents, which were subsequently stolen by the donors.

Many persons look upon this incident as apocryphal, but we are prepared to assure them upon personal knowledge of its truthfulness. For, during a brief but bloodless campaign in Virginia in 1864, whither we had gone as a gory “hundred day’s man” to put down the Rebellion, sixteen 41different identical spots were pointed out to us where Pocahontas saved the life of Captain Smith.

If there be any lingering doubt in the mind of any one we point him in triumph to any of our ably written city directories, the careful perusal of which will convince the most sceptical mind of Mr. Smith’s safety.

Pocahontas afterwards married a young English lord, (our American girls marry titles whenever they get the chance,) and at last accounts was doing very well.

Mr. Smith was elected president, by a large majority, of the little colony, which began to thrive henceforth, and was soon reinforced by other adventurers from England.

In the fall of 1609 Mr. Smith was compelled to return to England on account of a boil on his neck, or to have a tooth drawn, we forget which—but that is a mere detail.

Virginia became a fixed fact, and in 1664 was ceded to the Crown of Great Britain, which maintained jurisdiction over it until about the year 1776. On page 42 we reproduce the great Seal of Virginia. The allegory is so strikingly and beautifully obvious as to need no further elucidation.