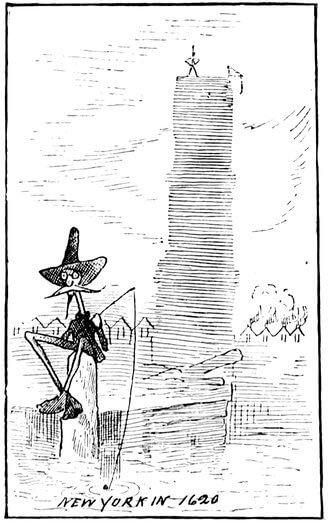 New York was discovered in 1609 by one Henry Hudson, an Englishman by birth, but to all intents and purposes a Dutchman, being then in the service of Holland.

Immediately on his arrival he began the work of building a bridge across the East river, which, it is feared, he never was able to finish. Traces of this quaint structure are plainly to be seen to this day, and have been known, time out of mind, as the “New East River Bridge.”

65Manhattan Island, upon which New York now stands, was settled by the Dutch, who called it New Netherlands (afterwards New Amsterdam). They bought it of the Indians, paying for the entire island the fabulous sum of twenty-five dollars, and liquidated the purchase with fire-water; but that was before the panic, when there was more “confidence” in business circles than now, and there had been as yet no inflation talk.

New York has changed hands since then, and we understand the property has enhanced in value somewhat. We doubt very much if the island could be bought to-day for double the price originally paid for it, even the way times are now.

Any one comparing the two pictures accompanying this chapter will see how 67marvelously we have improved since the days of the Dutch. No. 1 is copied from an old print, dating back to 1620, and is warranted wholly reliable. It is undoubtedly the Sabbath day, for in the foreground is seen an influential citizen of the period, who has come down to the Battery to meditate and fish for eels. He is thinking “How many ages hence will this, his lofty scene, be acted over.” Presently he will catch an eel.

Sketch No. 2 is of more recent origin, and was taken from our artist’s window. When this picture was first drawn the Brooklyn pier of the bridge was plainly discernible in the background. But since then our landlord, who is a German, and conducts a restaurant on Teutonic principles on the ground floor, has humanely run up 68a vent-pipe from his kitchen opposite our window, which necessarily excludes the picturesque ruin of the bridge from view. The reader will observe that nothing is now visible but a tall square sheet iron tube and an overpowering sense of garlic, which destroy at once our view and our appetite.