Chapter V - TREATS OF THE EARLY HISTORY OF MASSACHUSETTS 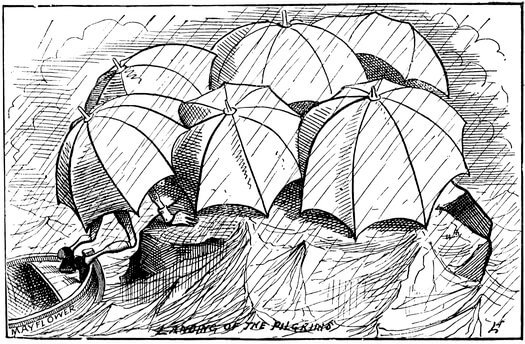 Massachusetts was first settled by Pilgrim Fathers who sailed from England in the year 1620 on board the May Flour, giving directions to the captain to set them down at some place where they could enjoy religious freedom, trusting rather to his knowledge of Navigation than of Theology to land them at the right place.

Thinking wild savages least likely to entertain pronounced religious prejudices, the captain of the May Flour bethought 46him of America, and landed them hap-hazard at Plymouth, Massachusetts, on the 21st of December, 1620. The Pilgrims made themselves as comfortable on Plymouth Rock as possible, and formed a treaty with the Indians which lasted several days.

The accompanying sketch not only accurately illustrates the event just narrated, but gives us a faithful and striking portrait of each of the Pilgrim Fathers, which will be immediately recognized by all their acquaintances. The drawing is made from a photograph taken on the spot by an artistic Pilgrim, who brought his camera with him, hoping to turn a penny by photographing the natives. We may here incidentally remark that his first native “subject,” dissatisfied with the result of a “sitting,” scalped the artist and confiscated 47his camera, which he converted into a rude sort of accordion. This instrument was the cause in a remote way of the ingenious native’s death, for he was promptly assassinated by his indignant neighbors. Let the young man over the way, who has recently traded his mother’s flat-irons for a concertina, take warning.

As some of our readers may not know what a Pilgrim Father is, and as it is the business of this book to make straight all the crooked paths of history, we beg to state that a Pilgrim Father is a fellow who believes in hard-money piety, if we may be allowed the expression, and with whom no paper substitute will pass current. All others are counterfeit, and none genuine without the signature, “Puritan.”

Having come so far to enjoy religious 49freedom, the Puritans took it unkind if any one ventured to differ with them. Our illustration shows their style of reforming Quakers in 1656. They used, as will be seen, a very irresistible line of argument, and the dissenting party thus “dealt” with generally found it useless to combat old-established prejudices.

It is not for the unimpassioned historian to comment upon such a system of orthodoxy. We will say, however, that the Puritans meant well, and were on the whole worthy sort of persons. At any rate, Plymouth Rock was a success, and may be seen to this day (with certain modifications) in the identical spot where the Pilgrim Fathers found it.