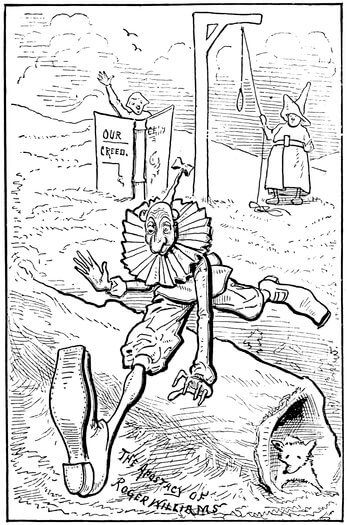 Rhode Island was first settled by a desperate character named Roger Williams, who was banished by the Puritans from Massachusetts because he entertained certain inflammatory views decidedly antagonistic to the enjoyment of religious freedom, namely: that all denominations of Christianity ought to be protected in the new colony.

This, of course, was mere heresy upon the face of it, and our forefathers proceeded to “deal” with Brother Williams in the true 58Puritanic style, when the misguided man bade them a hasty farewell and left on the first train for Rhode Island.

He brought up in a camp of Narragansett Indians, whom he found more liberal in their religious views.

The blind and bigoted Williams, with a few other renegades from the Puritan stronghold, established a colony at the head of Narragansett Bay, which they called Providence.

Other settlements soon sprang up, and the hardened sinner Williams went to England and obtained a charter which united all the settlements into one colony.

At the beginning of the Revolution Rhode Island had a population of 50,000 blinded bigots.