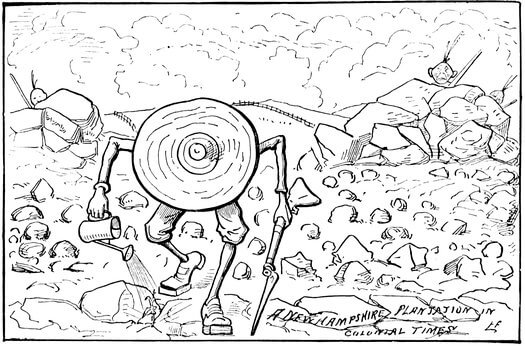 New Hampshire was a sickly child from the first, and of somewhat uncertain parentage. It was claimed by many proprietors, who were continually involved in lawsuits. Its soil was not very fertile, and yielded little else than Indians and lawyers. The former were the most virulent of which any of the colonies could boast, and the latter were of the young and “rising” sort.

These two elements managed to make it extremely lively for the average colonist, who was scalped upon the one hand and 61“skinned” upon the other. At first the horny-handed son of toil fondly hoped to raise corn, but owing to the poverty of the soil it was a day’s journey from hill to hill, and as much as a man’s scalp was worth to undertake to travel it. At harvest time there was an immense crop of cobble stones and no market for it.

Fortunately, in time the lawyers became starved out, but two great drawbacks to prosperity yet remained; sterility of soil and hostile Indians.

But the time was at hand when both these evils were to be remedied. His name was Smith—John Smith, of course—who readily undertook the contract of not only exterminating the Indians, but of fertilizing the soil.

To accomplish the first of these great 62ends, he disguised himself as a medicine man, and went boldly among the noble red men, inducting them into the mysteries of the manufacture and consumption of New England rum. He found them apt pupils, and it was not long before every Red of them, from the biggest sachem to the latest papoose, could not only distill his own fire-water, but drink it, too.

There was soon a very noticeable thinning out in the ranks of the noble red men, and a good deal was said about the setting sun.

The fire-water did its work thoroughly, and the colonists were at length masters of the situation so far as Indians were concerned.

The next thing was to make the land productive. This was a more laborious and tedious undertaking than the first, but 63John Smith was equal to the emergency. He caused dirt to be carted from a neighboring State until the rocky surface of New Hampshire was completely covered with a rich sandy loam a foot or two deep. The people raised “some pumpkins” after that, we are informed.

Thus was agriculture established on a solid basis, and New Hampshire made rapid progress.

All honor to John Smith.