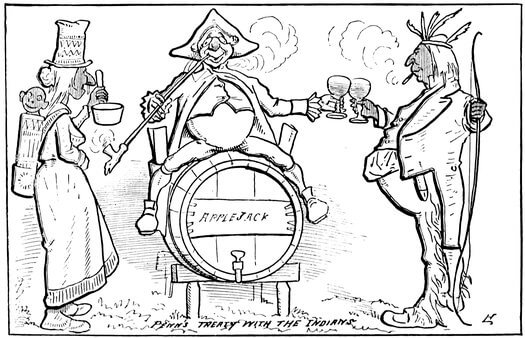 Not many generations ago New Jersey was a buzzing wilderness—howling would be a misnomer, as the tuneful mosquito had it all to himself.

“His right there was none to dispute.” The tuneful mosquito was, in fact, your true New Jersey aboriginal, and we do not hesitate to assert that the wilderness buzzed. But the time came at last when the wilderness of New Jersey was to have something else to do.

The first colony of Pennsylvania was founded in 1682 by Wm. Penn, a Quaker gentleman of steady habits, who, with remarkable foresight settled at Philadelphia, because he thought it an eligible place to hold a Centennial Exhibition. He took out naturalization papers, and began by studying the prejudices of the natives with a view to getting upon the good side of them. He smoked the calumet of peace with them and treated them to hard 75cider, under the mellowing influence of which they said he was like “Onas.” How well he deserved this compliment the reader will comprehend at once by reference to the accompanying illustration. The coincidence of resemblance is indeed striking, though it must be admitted he is not unlike a cigar sign either.

Wm. Penn bought property in Philadelphia, where he resided for thirty-six years, getting along very well with the neighbors. In proof of which we may mention that in 1718 he went back to England very well off indeed, where he died and was buried in his own hair.