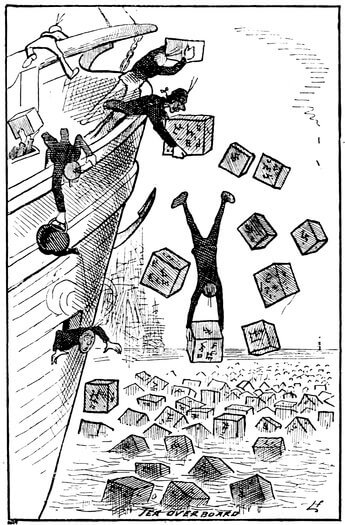 Having seen civilization comfortably settled in its new home, let us see how it conducted itself.

In the year 1660 certain bills were lobbied through the English Parliament which were highly obnoxious to the American colonies then established in Virginia. These were called the Navigation Acts, and prohibited the colonists from sending their pigs to any other market than England, nor allowed them to purchase any article 91of commerce, not even a toothpick, from any other country, and even that commodity must be ordered from the King himself and delivered in English vessels. If any ingenious colonist was caught whittling a pine splinter or a lucifer match to a point he was looked upon as an outlaw and taken home to England in irons to answer the charge of manufacturing illegal toothpicks. The Navigation Acts were swallowed by the colonists with wry faces for a century or so, and they were beginning to get used to it. But when one fine day the Mother Country invented a new dish, called the “Stamp Act,” and began to ladle it out the docile colonists entered their gentle protest.

The Stamp Act provided that the pigs and toothpicks must all bear the government 92stamp—the stamps, of course, to be paid for by the colonists.

The latter held town meetings, and the district schoolmaster made inflammatory speeches denouncing the British Parliament; the provincial editor hurled defiance in the face of the Crown in a double-leaded article, which he marked with a blue lead pencil and sent to the royal address with his own handwriting. The Crown turned pale, and immediately ordered the Stamp Act to be repealed. It was hoped that this concession would put an end to all hard feelings that had for a long time existed between Parliament and the Town Council of Boston. But now the cry was raised of “No Taxation without Representation,” and when one day the news reached Boston that there had been a duty imposed on tea, 93people took a sudden dislike for that beverage. They said the stamps spoiled the flavor for them, and refused to use it.

As a substitute they consoled themselves with a peculiar infusion called porkinbeans, a well-known Boston beverage.

One day a ship-load of “Best English Breakfast” arrived at the wharf, and all Boston picturesquely arrayed in Indian costume turned out to unload it. In the excitement of the moment the caddies were accidentally tossed over the wrong side of the ship, the stamps having previously been canceled by the absent-minded citizens.

Great Britain immediately sent over several ship-loads of troops, but these were scarcely less obnoxious than the cargo of stamped tea, especially as they asked some 94very embarrassing questions relative to the careless unloading of said cargo.

Patrick Henry, a member of the Virginia Legislature, took it upon himself to return a rather evasive answer by “repeating it, sir, WE MUST FIGHT!”