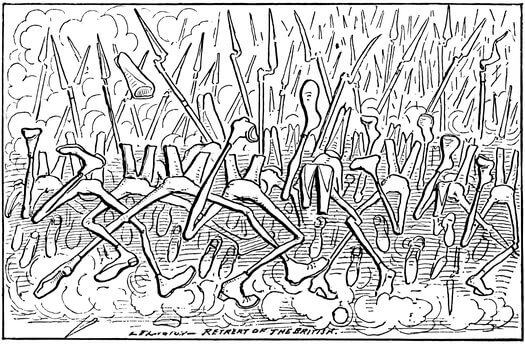 And we did fight.

The first gun was fired on the 19th of April, 1775, at Concord, where a large and select assortment of explosives for celebrating the coming Fourth of July was stored and guarded by a squad of minute-men.

A detachment of 3,000 British was sent to destroy these explosives.

“Disperse ye Rebels!” is what the British commander remarked.

“You’re another!” promptly replied the minute-men, and immediately obeyed the 98order to disperse. They placed an unexpected construction upon it, however, for they dispersed the British troops, who deemed it expedient to saunter back to Charlestown, where they found on counting noses that they were short some two hundred and eighty men.

This retreat of the British is one of the most brilliant on record, and, if we can believe the illustration on the opposite page, was conducted in a somewhat informal manner. The unstudied yet animated action of the pedal extremities speaks of a pressing engagement suddenly remembered that must not be neglected. There are certain anatomical peculiarities in this picture of which the least said the better.