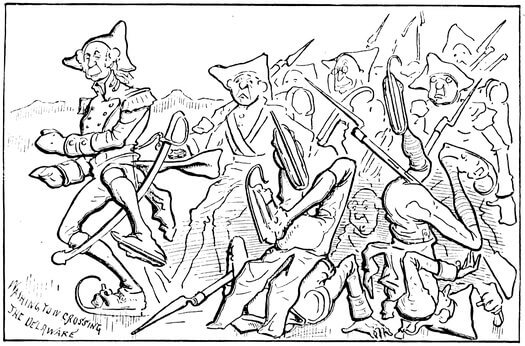 One dark, cold winter’s night General Washington issued very strict orders indeed relative to guard mounting, and each sentinel had to either show his naturalization papers or give affidavit of American parentage.

The British hordes were encamped just across the Delaware river in numbers greatly superior to the Americans, and were only waiting for the river to freeze over in order 109that they might skate across and capture the entire Continental army. As there was no immediate prospect of that, however, owing to the mildness of the weather, and having much spare time on their hands, the Britons improved their minds by the study of High-low-Jack and other branches of science.

It was Christmas night, and the whole army had been celebrating the day in good old English style. Every minion of them had inhaled more or less commissary whisky, and as night approached had succumbed to its sedative qualities.

General Washington saw how it would be, and announced his intention of spending the evening out, without entering into further particulars. He borrowed a log canoe of one of the neighbors and paddled across the river amid floating ice and made the 110whole army prisoners. The difficulty now arose of getting the booty home. The British army by actual count turned out to be much larger than Washington had anticipated, and he began to entertain serious doubts as to whether the small canoe would accommodate so many.

While he stood thus enjoying his triumph, and deliberating as to what course to pursue next, an able-bodied Britisher manifested unmistakable symptoms of returning animation by raising himself on one elbow, and demanding in a loud voice of the Father of his Country what the highly colored blazes the blarsted old three-cornered pig-tail meant by loafing about there, and then ordered him in an incoherent manner to “roll in another bar’l, and be quick about it.”

111With that coolness of deliberation which characterized all his public acts, Washington hastily withdrew, leaving his prisoners to be called for at some future time.

A few days later, taking advantage of a sudden cold snap, he crossed the Delaware once more, taking a small army with him to assist in bringing his prisoners home. The latter had so far recovered from the effects of Christmas as to make a stout resistance, and the battle of Trenton took place, resulting in favor of the Americans.

Washington crossing the Delaware furnished a very good subject for a very bad painting, which may be seen among other bad paintings in the Rotunda of the Capitol at Washington. At first sight this work of art might be mistaken for an advertising dodge of some enterprising ice company, 112but there is not the slightest doubt it is meant to bear a historical, not a commercial significance.

On page 112 will be found a reliable version of the incident briefly sketched, which our artist is willing to work up in oil for the Government if Congress will make a suitable appropriation and agree to furnish a barrel of oil and a few acres of canvas.

Sealed proposals addressed to care of the publishers of this work will be promptly considered.