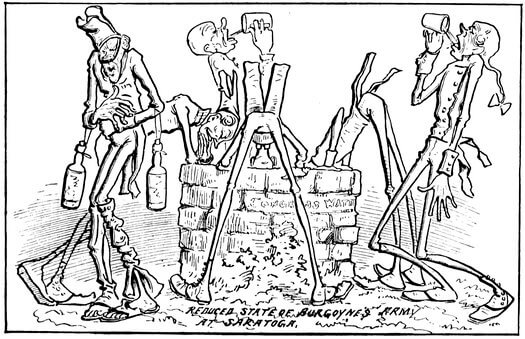 On the 17th of October, 1777, General Washington surrounded and captured the British army under Burgoyne at Saratoga, where they had been spending the Summer, and where it strikes us they had remained rather late in the season.

The British were entirely out of provisions, and had been living exclusively on congress water for some weeks past. Mr. Burgoyne had written home to the Crown that, if the war was to be successfully 116prosecuted in America, the army must be supplied with something more filling for the price than mineral water. But he must have forgotten to mail the letter, for no commissary stores arrived, and the soldiers continued to subsist upon their aqueous diet. They were consequently greatly reduced and fell an easy prey to the Americans.

That year Congress adopted the Stars and Stripes as the flag of the United States,[3] which (with the addition of other stars from time to time) has been handed down to grateful posterity, and to-day proudly reveals to the youth of a free Republic the whereabouts of the circus tent.

3. Note—This supplied a want long felt, as the army had hitherto rallied round Mr. Washington’s red pocket handkerchief tied to a broom handle.