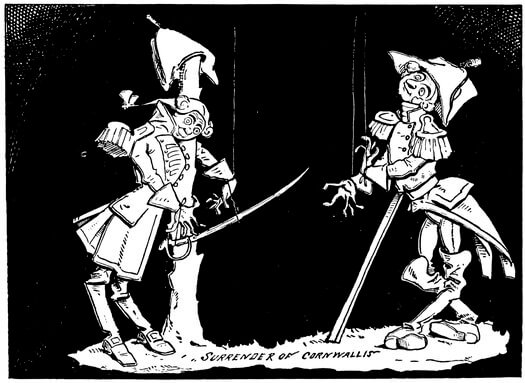 Cornwallis, commander of the British forces, placed his sword at the disposal of General Washington on the 19th of October, 1781, and took passage on the next steamer for Europe.

The final scene in the history of the war for American liberty is graphically set forth on page 132. It is copied from a group of wax-works illustrative of that event, and is, therefore, warranted reliable.

The war was now virtually over, but it was not until two years later that England 132signed a quit-claim deed resigning all right and title to its American property.

The Continental army was disbanded, and returning to their homes the soldiers hammered their muskets and things into plowshares and sold them to the farmers. The battle fields were cut up into corner lots, and a season of great prosperity began. Washington was elected President of the young Republic, and gave great satisfaction in that capacity. His second term having expired, he wrote an address of great literary merit and retired to private life at Mount Vernon. He ingeniously forged a little hatchet out of his sword for his little step-son, and taught him how to chop down cherry trees with neatness and dispatch and own up to it afterwards.