Popular superstition has it that necessity is the mother of invention. We are sorry to deprive the world of an old saying, but we happen to know a person to whom the world is indebted for more useful inventions than any other person of our acquaintance, and her name is Accident. For instance,

was accidentally discovered by that famous American statesman and philosopher, Benjamin Franklin, while indulging in his favorite pastime of flying a kite. He ascertained that it was unsafe to fly a kite in a thunder storm unless you have a lightning rod attached to your spinal column. This important discovery conferred upon society the priceless boon of the lightning-rod man.

is an American invention, but whether it compares favorably with “Old Tom” or “London Dock” we are unable to say. We do not believe in stimulants as a rule, yet it cannot be denied that the introduction of the new-fangled gin greatly stimulated the cultivation of cotton in America. 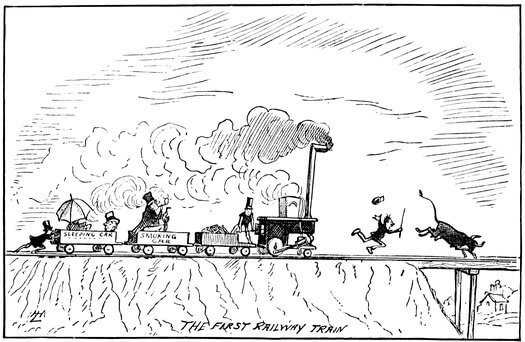 America took the lead in railroad construction, though the locomotive is claimed as an English contrivance.

The first railway train was a somewhat crude affair, but it succeeded in making a sensation. The locomotive was built by Peter Cooper, and he it was who ran the machine on its experimental trip.

The passengers were a surgeon, a chaplain, an editor, (names forgotten,) John Smith, and another fellow, (all dead-heads.) Mr. Cooper poked the fire, the other fellow pushed behind, while John Smith urbanely acted as cow-catcher. The clergyman rode in the smoking-car and meditated on the 189probabilities of ever seeing his family again this side of Jordan. The editor went to sleep, while the doctor sat behind ready to jump out and save himself in case of accident.

After a delightful excursion of fifty miles or so into the country the party returned home—afoot. 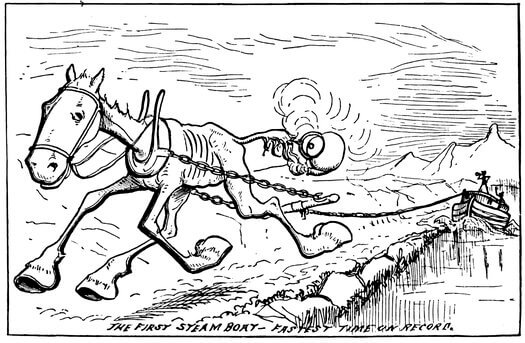 was discovered by Robert Fulton September 4th, 1807. Our special artist was promptly on the spot, and we are thus enabled to lay before our readers all that is worth knowing of this event in the picture opposite. 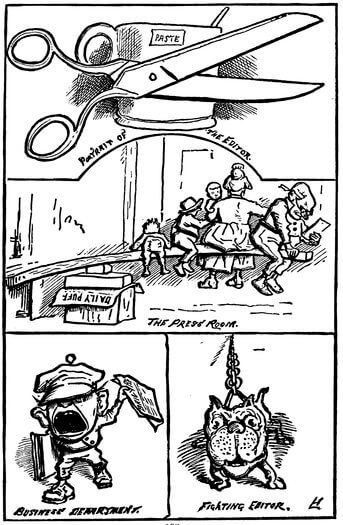 Newspapers have become a household necessity in every well-regulated American 191family. They mould public opinion, and are handy to light fires with. The universal use of newspapers gave rise to the ten-cylinder printing press, an American invention.

The publication of a daily newspaper is one of the most lucrative professions of the day, and we strongly advise our American youth to abandon all idea of ever becoming President, and save up all their pennies to start newspapers with when they grow up. An ably-conducted daily newspaper brings from two and a half to three cents per pound at the junk dealers, when times are good. On page 193 are some illustrated features of a well-conducted newspaper office. The central picture is full of tender pathos. The editor and proprietor (evidently a man of slender 193means) is seen working off his edition, assisted by his near relatives. Each individual, from the proud wife and doting mother to the infant at her breast, seems to attach weight to the enterprise with a degree of enthusiasm that ought to encourage any man. 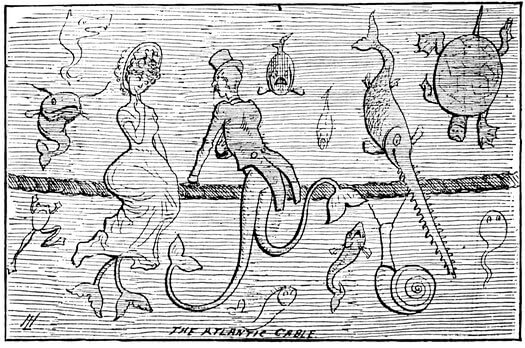 The Electro-Magnetic Submarine Trans-Atlantic Anglo-American Telegraph Cable is, perhaps, the most wonderful of all Yankee notions. By its agency our great morning dailies are able to get the most unreliable foreign news at the low rate of ten dollars per word. The only wonder is how people on both sides of the water ever got on so long without the cable.

On page 195 is a picture representing the submarine cable, for which we cannot help 195suspecting the artist has drawn largely on his imagination. 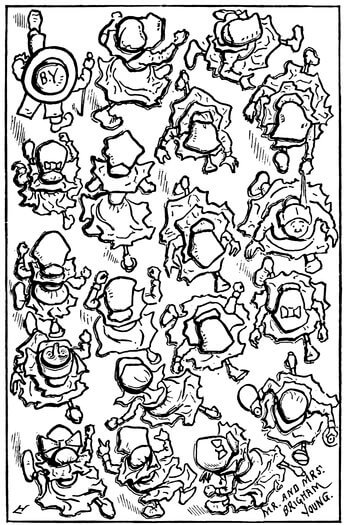 is of doubtful origin. Some authorities give the credit of its invention to Joseph Smith, while others do not hesitate to ascribe its origin to a gentleman whom the mind naturally associates with sulphuric gases. However that may be, Mormonism is one of the institutions of the country, and Brigham Young is its prophet, his present address being Salt Lake City, Utah.

Mr. Young makes a specialty of matrimony, and has taken strict precautions to guard against widowhood, as will be seen by reference to our illustration, in which are seen Mr. and Mrs. Young on their bridal tour.

Brigham makes it a point of etiquette to marry every unmarried lady to whom he happens to be introduced, and his life is a perennial honeymoon. To the merely Gentile man, whose matrimonial experience has been conducted on monogamic principles, the hardihood of Mr. Young is simply appalling.

to keep hens from setting is an effervescence of the fertile brain of, well, no matter who. It speaks for itself.

For further information on the interesting subject of Yankee ingenuity we commend the reader’s careful perusal of the United States Patent Office Report, a work unequaled for the brilliancy of its conception and startling dramatic situations, and which, for its conscientious adhesion to facts, only has a rival in the present work. 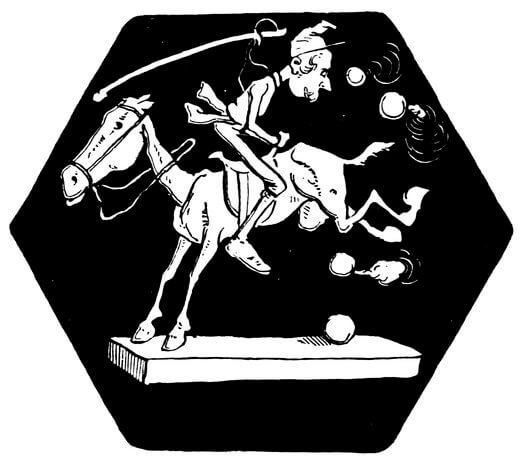 The visitor to the Capitol, at Washington, will be struck with the paucity of American art, as evinced by the specimens of painting and sculpture to be seen in the Rotunda and immediate vicinity of that structure. Barrels of paint and whole quarries of marble have been sacrificed by an inscrutable Congress, whose sole object seems to have been to frighten its constituency away from the scene of its dark plottings with grotesque Washingtons, fantastic Lincolns, thinly-clad Indian ladies, and unprincipled looking Puritans. Some meritorious works of art, however, have 201lately found their way to the Capitol by accident, but let us have more of them. We humbly submit a few designs for equestrian statuary, which only await a misappropriation by Congress, as follows:

Plate I.—Statue for a great American military hero who always kept his face to the foe.

Plate II.—Is for another great military hero (a member of militia) who would have kept his face to the foe if circumstances had been favorable.

Plate III.—Equestrian statue of a public gentleman who kept his face wherever it suited his convenience.

Plate IV.—A statue (also equestrian) for a great politician of foreign origin who rose from humble beginnings to great achievements.