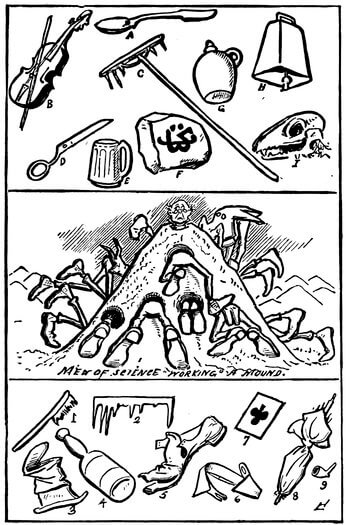 The origin of the North American Indian has always been shrouded in the deepest mystery, and wise-heads of every age and clime have sought to tear aside the veil and show us our aboriginal brother in his true colors.

Some of these learned gentlemen have carried their zeal to the extent of renting wigwams in the Indian country, and living 207among these primitive children of the forest, hoping, by dint of listening at key-holes, to overhear some remark dropped by them that would reveal where they emigrated from, but nothing came of it but premature baldness to the wise-head so investigating. Others again have comfortably settled down into the belief that these singular members of society are a revised edition of the strayed or stolen tribes of Israel that have so long been advertised for in vain.

In support of this theory the latter class of philosophers has dived into side hills, (supposed to have been thrown up by an eccentric race of Indians known as mound builders,) turning up every conceivable article of second-hand Indian miscellany, and asking the world to believe that these mysterious “mounds” were simply 208subterraneous pawnbroker’s shops, built and conducted in obedience to a well-known national instinct, and that the articles they contain are nothing more nor less than unredeemed pledges “left” by impecunious prehistoric ladies and gentlemen who were compelled to resort to that means of raising the wind.

On page 209 our artist shows us the exponents of the latter theory at work, and also gives us a singularly correct drawing of some of the bric-a-brac which they have unearthed. We will take the liberty of explaining further, and tell all we know concerning the supposed uses of these mysterious articles.

After going carefully over this array of evidence one naturally hesitates before looking further for a theory. But, taking for granted that the Indians really are a remnant of those mislaid Israelites, the difficulty next arises as to how the dickens they got here, for when the Israelites were first missed there was as yet no railway communication between this country and Asia, and unless they tunneled their way 211up through, via China, it is difficult to account for their presence here.

In common with other great minds, we, too, have devoted much of our spare time to the effort of setting our red brother on his legs before the world, and of tracing his footprints back through the ages, but until quite recently we have been uniformly baffled. The fact is, our red brother ought really to have kept a diary. He would thus have saved us wise-acres much trouble and unnecessary expense. The next time we hope he will not overlook this important detail.

As we said, all our efforts to trace the Indians back to their origin had failed until recently. We rejected the “remnant” theory after a fair trial. We compared this remnant with the original piece 212(so claimed), and found it a bad match. In the face of strong evidence we renewed our efforts, which were destined to meet with reward, as will be seen presently.

A month or two since it luckily occurred to us to address a letter to a skillful sachem, (who happens to be an acquaintance of ours, and is at present located out West,) upon this interesting subject.

This gentleman, who is of the Choctaw persuasion, and was christened Gimmechawtybackee, (Billious Jake,) sent us a most courteous and comprehensive reply, which came to hand a few days since, and which covers the whole ground in the most lucid manner. We wonder we never thought of it before.

We here insert Billious Jake’s letter verbatim. It is a master-piece of composition, and sets the matter forever at rest. (Daily papers please copy.)

Before changing the subject, we should really like to pictorially look into the habits of these strange victims of circumstances. Examine page 214, if you please. In No. 1 we see a stony-hearted savage taking a very mean advantage of a white captive, and torturing him to death in the most horrible and deliberate manner. No. 2, an early settler pursued by a native. No. 3, Indian barber. And lastly, in No. 4, we have an Indian gentleman journeying towards the setting sun on dead-head principles.

“His faithful dog shall bear him company.”—Campbell.