MY FATHER MAKES A BRIDGE

My father walked back and forth along the bank trying to think of some way to cross the river. He found a high flagpole with a rope going over to the other side. The rope went through a loop at the top of the pole and then down the pole and around a large crank. A sign on the crank said:

From what the cat had told my father, he knew that the other end of the rope was tied around the dragon's neck, and he felt sorrier than ever for the poor dragon. If he were on this side, the gorilla would twist his wings until it hurt so much that he'd have to fly to the other side. If he were on the other side, the gorilla would crank the rope until the dragon would either choke to death or fly back to this side. What a life for a baby dragon!

My father knew that if he called to the dragon to come across the river, the gorilla would surely hear him, so he thought about climbing the pole and going across on the rope. The pole was very high, and even if he could get to the top without being seen he'd have to go all the way across hand over hand. The river was very muddy, and all sorts of unfriendly things might live in it, but my father could think of no other way to get across. He was about to start up the pole when, despite all the noise the monkeys were making, he heard a loud splash behind him. He looked all around in the water but it was dusk now, and he couldn't see anything there.

"It's me, Crocodile," said a voice to the left. "The water's lovely, and I have such a craving for something sweet. Won't you come in for a swim?" 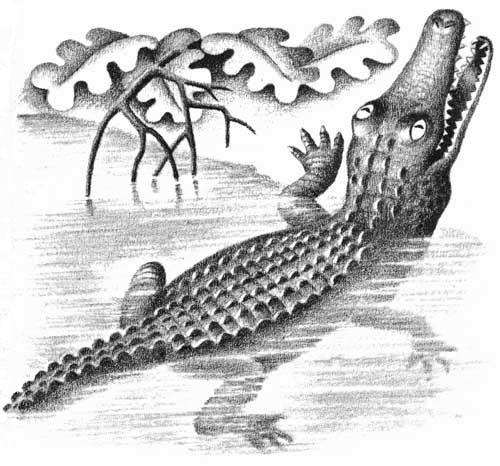 A pale moon came out from behind the clouds and my father could see where the voice was coming from. The crocodile's head was just peeping out of the water.

"Oh, no thank you," said my father. "I never swim after sundown, but I do have something sweet to offer you. Perhaps you'd like a lollipop, and perhaps you have friends who would like lollipops, too?"

"Lollipops!" said the crocodile. "Why, that is a treat! How about it, boys?"

A whole chorus of voices shouted, "Hurrah! Lollipops!" and my father counted as many as seventeen crocodiles with their heads just peeping out of the water.

"That's fine," said my father as he got out the two dozen pink lollipops and the rubber bands. "I'll stick one here in the bank. Lollipops last longer if you keep them out of the water, you know. Now, one of you can have this one."

The crocodile who had first spoken swam up and tasted it. "Delicious, mighty delicious!" he said.

"Now if you don't mind," said my father, "I'll just walk along your back and fasten another lollipop to the tip of your tail with a rubber band. You don't mind, do you?" 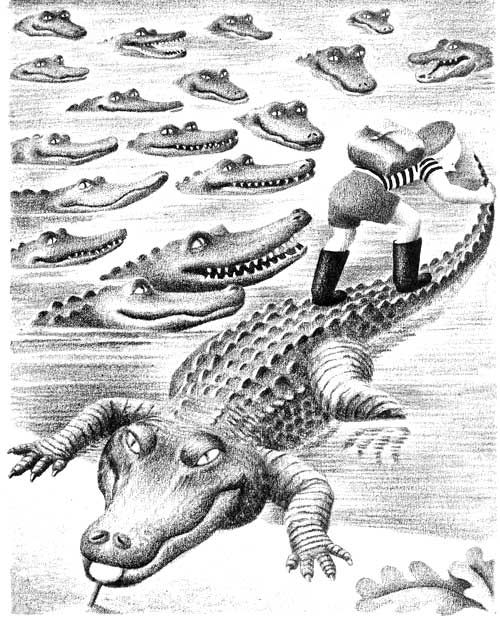 "Oh no, not in the least," said the crocodile.

"Can you get your tail out of the water just a bit?" asked my father.

"Yes, of course," said the crocodile, and he lifted up his tail. Then my father ran along his back and fastened another lollipop with a rubber band.

"Who's next?" said my father, and a second crocodile swam up and began sucking on that lollipop.

"Now, you gentlemen can save a lot of time if you just line up across the river," said my father, "and I'll be along to give you each a lollipop."

So the crocodiles lined up right across the river with their tails in the air, waiting for my father to fasten on the rest of the lollipops. The tail of the seventeenth crocodile just reached the other bank.