MY FATHER MEETS A GORILLA

My father was very hungry so he sat down under a baby banyan tree on the side of the trail and ate four tangerines. He wanted to eat eight or ten, but he had only thirteen left and it might be a long time before he could get more. He packed away all the peels and was about to get up when he heard the familiar voices of the boars.

"I wouldn't have believed it if I hadn't seen them with my own eyes, but wait and see for yourself. All the tigers are sitting around chewing gum to beat the band. Old Rhinoceros is so busy brushing his tusk that he doesn't even look around to see who's going by, and they're all so busy they won't even talk to me!"

"Horsefeathers!" said the other boar, now very close to my father. "They'll talk to me! I'm going to get to the bottom of this if it's the last thing I do!"

The voices passed my father and went around a curve, and he hurried on because he knew how much more upset the boars would be when they saw the lion's mane tied up in hair ribbons. 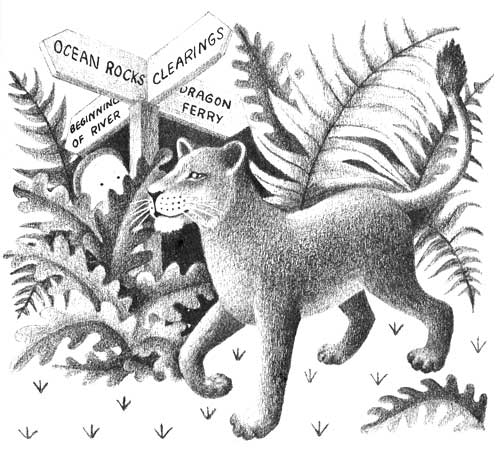 Before long my father came to a crossroads and he stopped to read the signs. Straight ahead an arrow pointed to the Beginning of the River; to the left, the Ocean Rocks; and to the right, to the Dragon Ferry. My father was reading all these signs when he heard pawsteps and ducked behind the signpost. A beautiful lioness paraded past and turned down toward the clearings. Although she could have seen my father if she had bothered to glance at the post, she was much too occupied looking dignified to see anything but the tip of her own nose. It was the lion's mother, of course, and that, thought my father, must mean that the dragon was on this side of the river. He hurried on but it was farther away than he had judged. He finally came to the river bank in the late afternoon and looked all around, but there was no dragon anywhere in sight. He must have gone back to the other side.

My father sat down under a palm tree and was trying to have a good idea when something big and black and hairy jumped out of the tree and landed with a loud crash at his feet.

"Well what?" said my father, for which he was very sorry when he looked up and discovered he was talking to an enormous and very fierce gorilla.

"Well, explain yourself," said the gorilla. "I'll give you till ten to tell me your name, business, your age and what's in that pack," and he began counting to ten as fast as he could. 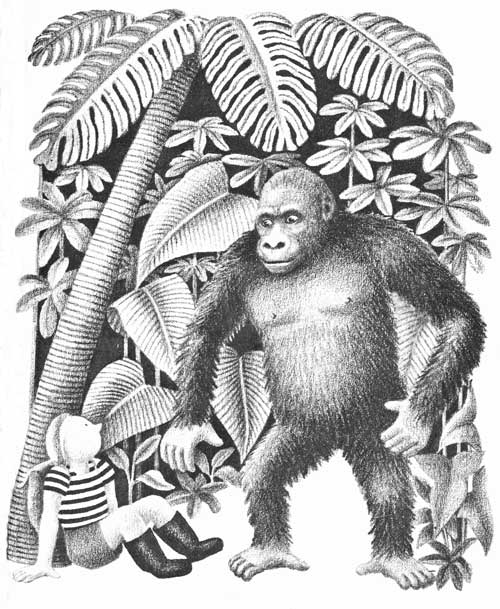 My father didn't even have time to say "Elmer Elevator, explorer" before the gorilla interrupted, "Too slow! I'll twist your arms the way I twist that dragon's wings, and then we'll see if you can't hurry up a bit." He grabbed my father's arms, one in each fist, and was just about to twist them when he suddenly let go and began scratching his chest with both hands.

"Blast those fleas!" he raged. "They won't give you a moment's peace, and the worst of it is that you can't even get a good look at them. Rosie! Rhoda! Rachel! Ruthie! Ruby! Roberta! Come here and get rid of this flea on my chest. It's driving me crazy!"

Six little monkeys tumbled out of the palm tree, dashed to the gorilla, and began combing the hair on his chest. 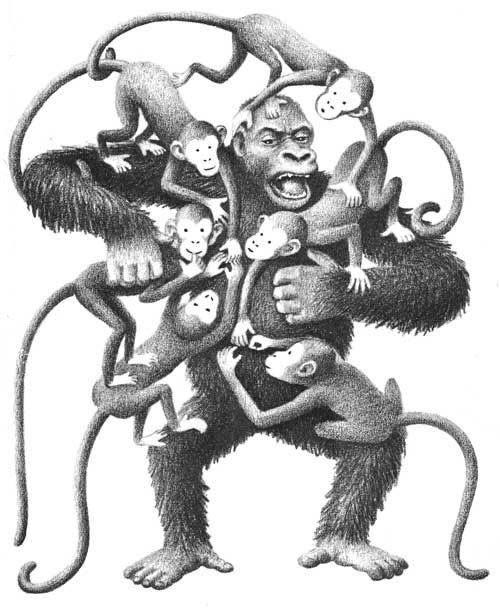 "Oh, Gorilla," said my father, "in my knapsack I have six magnifying glasses. They'd be just the thing for hunting fleas." My father unpacked them and gave one to Rosie, one to Rhoda, one to Rachel, one to Ruthie, one to Ruby, and one to Roberta. 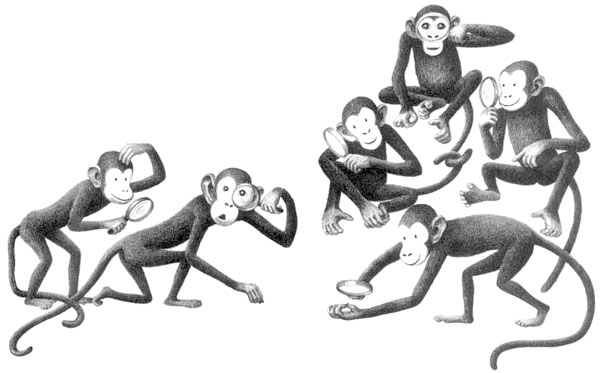 "Why, they're miraculous!" said the six little monkeys. "It's easy to see the fleas now, only there are hundreds of them!" And they went on hunting frantically.

A moment later many more monkeys appeared out of a near-by clump of mangroves and began crowding around to get a look at the fleas through the magnifying glasses. They completely surrounded the gorilla, and he could not see my father nor did he remember to twist his arms. 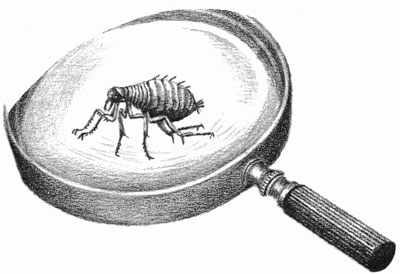