MY FATHER MEETS A RHINOCEROS

My father soon found a trail leading away from the clearing. All sorts of animals might be using it too, but he decided to follow the trail no matter what he met because it might lead to the dragon. He kept a sharp lookout in front and behind and went on.

Just as he was feeling quite safe, he came around a curve right behind the two wild boars. One of them was saying to the other, "Did you know that the tortoises thought they saw Monkey carrying his sick grandmother to the doctor's last night? But Monkey's grandmother died a week ago, so they must have seen something else. I wonder what it was."

"I told you that there was an invasion afoot," said the other boar, "and I intend to find out what it is. I simply can't stand invasions."

"Nee meither," said a tiny little voice. "I mean, me neither," and my father knew that the mouse was there, too. 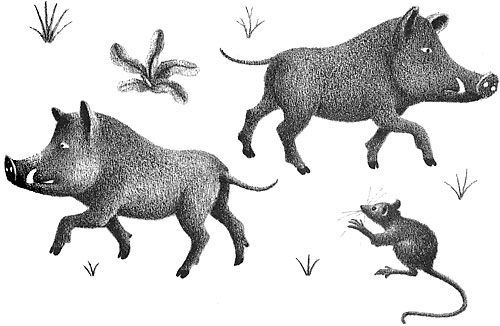 "Well," said the first boar, "you search the trail up this way to the dragon. I'll go back down the other way through the big clearing, and we'll send Mouse to watch the Ocean Rocks in case the invasion should decide to go away before we find it."

My father hid behind a mahogany tree just in time, and the first boar walked right past him. My father waited for the other boar to get a head start on him, but he didn't wait very long because he knew that when the first boar saw the tigers chewing gum in the clearing, he'd be even more suspicious.

Soon the trail crossed a little brook and my father, who by this time was very thirsty, stopped to get a drink of water. He still had on his rubber boots, so he waded into a little pool of water and was stooping down when something quite sharp picked him up by the seat of the pants and shook him very hard.

My father couldn't see who was talking because he was hanging in the air right over the pool, but he said, "Oh, no, I'm so sorry. I didn't know that everybody had a private weeping pool." 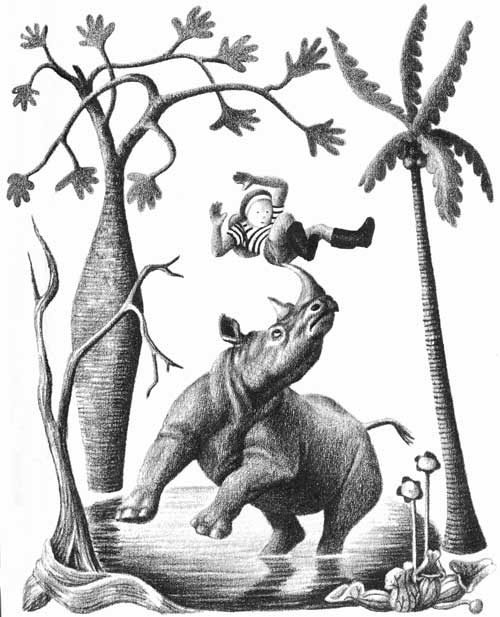 "Everybody doesn't!" said the angry voice, "but I do because I have such a big thing to weep about, and I drown everybody I find using my weeping pool." With that the animal tossed my father up and down over the water.

"What—is it—that—you—weep about—so much?" asked my father, trying to get his breath, and he thought over all the things he had in his pack.

"Oh, I have many things to weep about, but the biggest thing is the color of my tusk." My father squirmed every which way trying to see the tusk, but it was through the seat of his pants where he couldn't possibly see it. "When I was a young rhinoceros, my tusk was pearly white," said the animal (and then my father knew that he was hanging by the seat of his pants from a rhinoceros' tusk!), "but it has turned a nasty yellow-gray in my old age, and I find it very ugly. You see, everything else about me is ugly, but when I had a beautiful tusk I didn't worry so much about the rest. Now that my tusk is ugly too, I can't sleep nights just thinking about how completely ugly I am, and I weep all the time. But why should I be telling you these things? I caught you using my pool and now I'm going to drown you."

"Oh, wait a minute, Rhinoceros," said my father. "I have some things that will make your tusk all white and beautiful again. Just let me down and I'll give them to you."

The rhinoceros said, "You do? I can hardly believe it! Why, I'm so excited!" He put my father down and danced around in a circle while my father got out the tube of tooth paste and the toothbrush.

"Now," said my father, "just move your tusk a little nearer, please, and I'll show you how to begin." My father wet the brush in the pool, squeezed on a dab of tooth paste, and scrubbed very hard in one tiny spot. Then he told the rhinoceros to wash it off, and when the pool was calm again, he told the rhinoceros to look in the water and see how white the little spot was. It was hard to see in the dim light of the jungle, but sure enough, the spot shone pearly white, just like new. The rhinoceros was so pleased that he grabbed the toothbrush and began scrubbing violently, forgetting all about my father.

Just then my father heard hoofsteps and he jumped behind the rhinoceros. It was the boar coming back from the big clearing where the tigers were chewing gum. The boar looked at the rhinoceros, and at the toothbrush, and at the tube of tooth paste, and then he scratched his ear on a tree. "Tell me, Rhinoceros," he said, "where did you get that fine tube of tooth paste and that toothbrush?"

"Too busy!" said the rhinoceros, and he went on brushing as hard as he could.

The boar sniffed angrily and trotted down the trail toward the dragon, muttering to himself, "Very suspicious—tigers too busy chewing gum, Rhinoceros too busy brushing his tusk—must get hold of that invasion. Don't like it one bit, not one bit! It's upsetting everybody terribly—wonder what it's doing here, anyway." 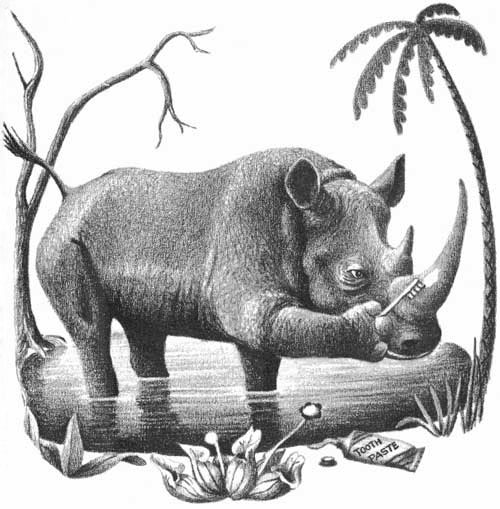 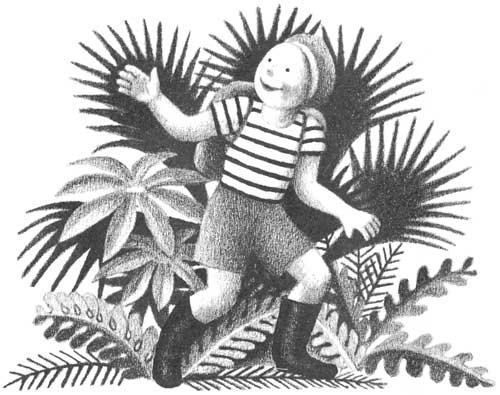