MY FATHER MEETS A LION

My father waved goodbye to the rhinoceros, who was much too busy to notice, got a drink farther down the brook, and waded back to the trail. He hadn't gone very far when he heard an angry animal roaring, "Ding blast it! I told you not to go blackberrying yesterday. Won't you ever learn? What will your mother say!"

My father crept along and peered into a small clearing just ahead. A lion was prancing about clawing at his mane, which was all snarled and full of blackberry twigs. The more he clawed the worse it became and the madder he grew and the more he yelled at himself, because it was himself he was yelling at all the time.

My father could see that the trail went through the clearing, so he decided to crawl around the edge in the underbrush and not disturb the lion.

He crawled and crawled, and the yelling grew louder and louder. Just as he was about to reach the trail on the other side the yelling suddenly stopped. My father looked around and saw the lion glaring at him. The lion charged and skidded to a stop a few inches away. 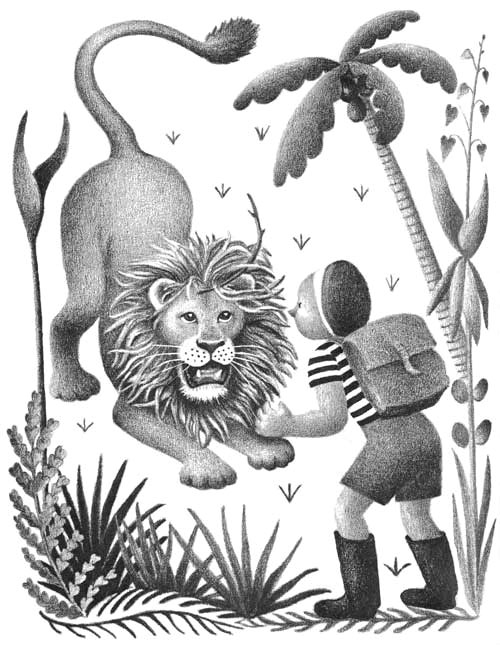 "Who are you?" the lion yelled at my father.

"My name is Elmer Elevator."

"Where do you think you're going?"

"That's what you think!" said the lion. "Ordinarily I'd save you for afternoon tea, but I happen to be upset enough and hungry enough to eat you right now." And he picked up my father in his front paws to feel how fat he was.

My father said, "Oh, please, Lion, before you eat me, tell me why you are so particularly upset today."

"It's my mane," said the lion, as he was figuring how many bites a little boy would make. "You see what a dreadful mess it is, and I don't seem to be able to do anything about it. My mother is coming over on the dragon this afternoon, and if she sees me this way I'm afraid she'll stop my allowance. She can't stand messy manes! But I'm going to eat you now, so it won't make any difference to you."

"Oh, wait a minute," said my father, "and I'll give you just the things you need to make your mane all tidy and beautiful. I have them here in my pack."

"You do?" said the lion. "Well, give them to me, and perhaps I'll save you for afternoon tea after all," and he put my father down on the ground.

My father opened the pack and took out the comb and the brush and the seven hair ribbons of different colors. "Look," he said, "I'll show you what to do on your forelock, where you can watch me. First you brush a while, and then you comb, and then you brush again until all the twigs and snarls are gone. Then you divide it up in three and braid it like this and tie a ribbon around the end." 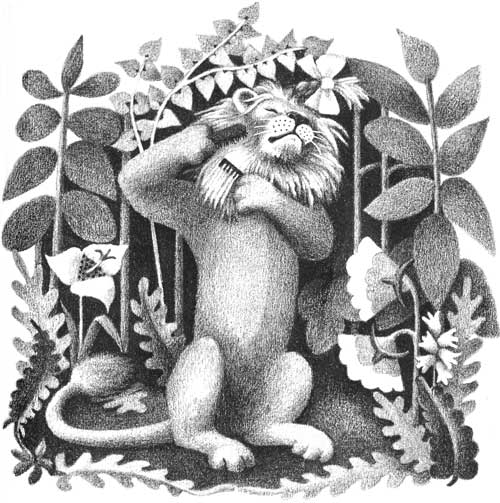 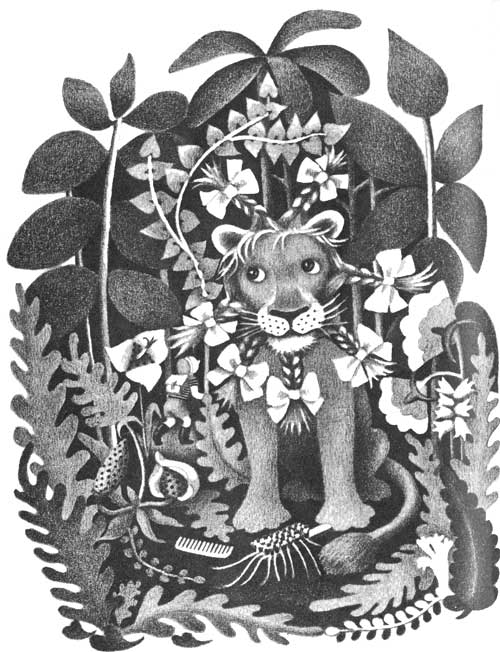