The Real War Will Never Get in the Books

Whitman's piece was published in Complete Prose Works of Walt Whitman (1892).
"So much of a race depends on how it faces death, and how it stands personal anguish and sickness."

And so good-bye to the war. I know not how it may have been, or may be, to others—to me the main interest I found, (and still, on recollection, find,) in the rank and file of the armies, both sides, and in those specimens amid the hospitals, and even the dead on the field. To me the points illustrating the latent personal character and eligibilities of these States, in the two or three millions of American young and middle-aged men, North and South, embodied in those armies—and especially the one-third or one-fourth of their number, stricken by wounds or disease at some time in the course of the contest—were of more significance even than the political interests involved. (As so much of a race depends on how it faces death, and how it stands personal anguish and sickness. As, in the glints of emotions under emergencies, and the indirect traits and asides in Plutarch, we get far profounder clues to the antique world than all its more formal history.) 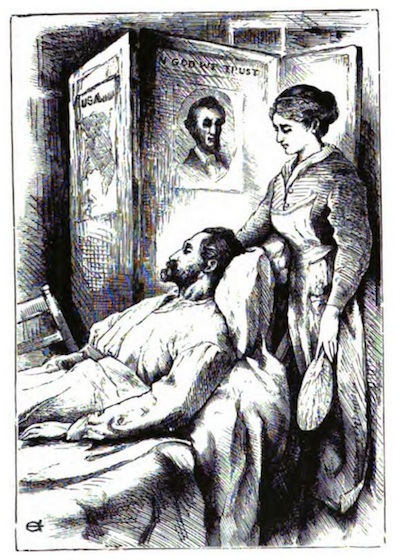 Future years will never know the seething hell and the black infernal background of countless minor scenes and interiors, (not the official surface-courteousness of the Generals, not the few great battles) of the Secession war; and it is best they should not—the real war will never get in the books. In the mushy influences of current times, too, the fervid atmosphere and typical events of those years are in danger of being totally forgotten. I have at night watch'd by the side of a sick man in the hospital, one who could not live many hours. I have seen his eyes flash and burn as he raised himself and recurr'd to the cruelties on his surrender'd brother, and mutilations of the corpse afterward. (See in the preceding pages, the incident at Upperville—the seventeen kill'd as in the description, were left there on the ground. After they dropt dead, no one touch'd them—all were made sure of, however. The carcasses were left for the citizens to bury or not, as they chose.)

Such was the war. It was not a quadrille in a ball-room. Its interior history will not only never be written—its practicality, minutia; of deeds and passions, will never be even suggested. The actual soldier of 1862-'65, North and South, with all his ways, his incredible dauntlessness, habits, practices, tastes, language, his fierce friendship, his appetite, rankness, his superb strength and animality, lawless gait, and a hundred unnamed lights and shades of camp, I say, will never be written—perhaps must not and should not be.

The preceding notes may furnish a few stray glimpses into that life, and into those lurid interiors, never to be fully convey'd to the future. The hospital part of the drama from '61 to '65, deserves indeed to be recorded. Of that many-threaded drama, with its sudden and strange surprises, its confounding of prophecies, its moments of despair, the dread of foreign interference, the interminable campaigns, the bloody battles, the mighty and cumbrous and green armies, the drafts and bounties—the immense money expenditure, like a heavy-pouring constant rain—with, over the whole land, the last three years of the struggle, an unending, universal mourning-wail of women, parents, orphans—the marrow of the tragedy concentrated in those Army Hospitals—(it seem'd sometimes as if the whole interest of the land, North and South, was one vast central hospital, and all the rest of the affair but flanges)—those forming the untold and unwritten history of the war—infinitely greater (like life's) than the few scraps and distortions that are ever told or written. Think how much, and of importance, will be—how much, civic and military, has already been—buried in the grave, in eternal darkness.

You may enjoy reading some of our Civil War Stories.

Add The Real War Will Never Get in the Books to your library.

Return to the Walt Whitman library , or . . . Read the next essay; Two Brothers, One South, One North