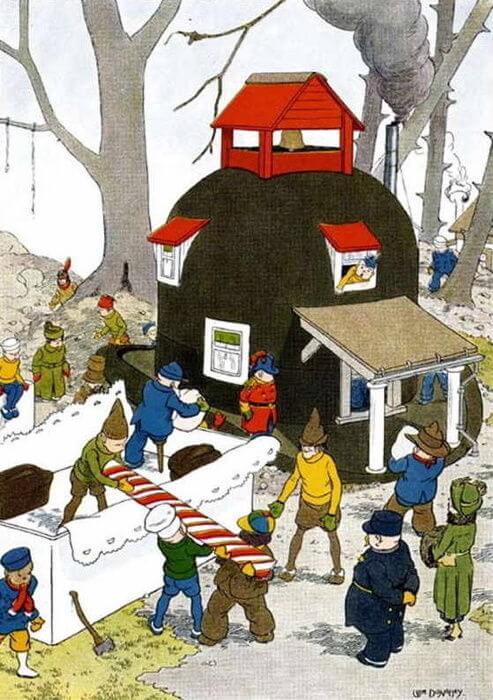 ON CHRISTMAS morning the Dunce was first to jump out of bed. While he was getting into his teenie weenie clothes he happened to glance out of the tiny window.

“G-G-G-G-Great c-c-c-cat f-f-f-fish!” he yelled, and his eyes nearly popped out of his head, for on the walk before the school house stood a huge box.

“Get up, J-J-Jerry,” cried the Dunce, pulling the bed clothes from the sleeping Clown. “There’s a C-C-C-Christmas p-p-p-present out in the front yard and it’s as big as, as, as a—jimminie—it’s as big as everything,” and the Dunce dashed out of the house at top speed.

All the little folks had been awakened by the noisy Dunce and in a few minutes they came pouring out of the shoe house like a stream of water.

“It’s got a stamp on it and everything,” shouted the excited Dunce, who had crawled up onto the box. “It’s addressed to us too. The mail man must have left it. Hooray!” and the Dunce danced in such a comical way that all the little folks nearly burst from laughing.

Some kind person had sent the little people a pound box of candy and they were too excited to eat their breakfast, so the General told them they could open the box at once.

It took a great deal of labor for the little folks to cut away the paper and remove the box cover.

“Oh WHILLIKER!” howled the Dunce when the cover had been removed, “it’s full of chocolates and bon bons, and great cats’ eyes, there’s a stick of peppermint candy.”

“I don’t know where in the world we’re going to store all this candy,” said the General. “There’s enough to last us a year.”

“You can store it in my bed room,” cried the Dunce, “only leave just enough room for me to sleep in!”

“You mean, leave enough room so you can eat yourself to death,” laughed the Cowboy.

“We can put a little of it in the cellar,” said the Cook. “Maybe two or three pieces.”

“There’s room for four or five pieces in the tool house,” suggested the Old Soldier, “and I think we can put the rest in the upper floor of the school house.”

It was decided to store as much as possible in the school house and the little men began carrying the candy in as fast as they could.

“We can’t put any more in here,” shouted the Old Soldier, who came running out of the school house after several pieces had been stored away. “We’ve stored eight chocolates and a stick of peppermint upstairs and the beams have begun to bend. The floor will come tumbling down if we put another piece up there.”

Other places had to be found to store the candy and when the last piece had been put away there wasn’t a bit of vacant space left anywhere in the little houses under the rose bush.

“Great grief!” exclaimed the General, when the last piece had been tucked away, “we’ll have enough candy to last us the rest of our natural lives.”

“Don’t you worry about that, General,” cried the Dunce. “I can eat a whole chocolate myself.”

After the Teenie Weenies had eaten their Christmas dinner, a whole chocolate was placed on the table and every one of the little people was allowed to eat all the candy he wanted.

The Dunce ate himself sick, but the next morning he was ready for more and the General made up his mind that the candy would not last as long as he first thought it would.

Several of the candies were stuffed with nuts and these the Teenie Weenies gave to their friend the squirrel, but most of it they kept for themselves and several pieces are still stored, this very minute, in the little houses under the rose bush.