A Squirrel to the Rescue 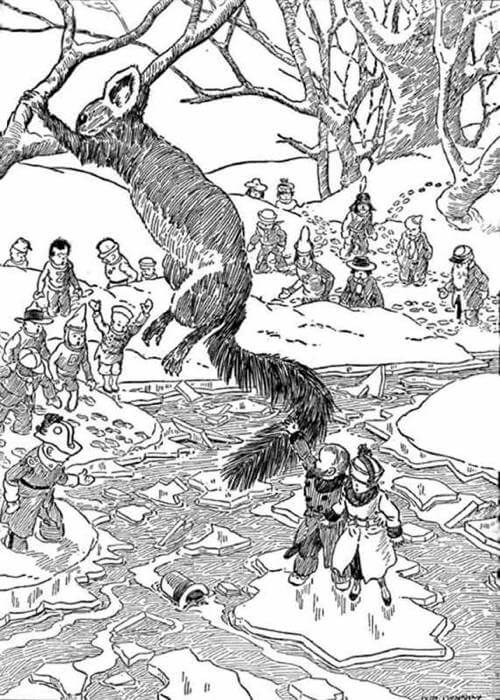 THE weather continued cold for several days and the Teenie Weenies enjoyed almost a solid week of skating. An old dripping pan, which stood under a water spout at the corner of a big house near by, made a wonderful place to try out their tiny skates.

The ice was fully an inch thick, and as it was frozen solid it made a safe place to skate. The little people had a fine time on the smooth ice, but at the end of the week a thaw set in and they were forced to walk for their exercise.

“I’d advise you people to all go out and take a long walk, for I’m going to have a dandy dinner and I want you to have good appetites so you’ll enjoy it,” said the Cook Sunday morning as he stood tying on his apron in the Teenie Weenie dining room door.

“Wh-Wh-Wh-What are you going to-to-to have for dinner?” asked the Dunce. “A baked prune?”

“Oh, good, good!” shouted the Dunce, catching the Lady of Fashion around the waist and dancing about the room.

In a few minutes the Teenie Weenies bundled themselves into their warm muffs, sweaters and mittens and started out on a long walk.

“Let’s go down and see if the creek is frozen over,” said the General. “I haven’t been down that way for a long time, and it will make a nice walk for us.”

There was quite a lot of snow on the ground, but as it was rather solid the little people were able to walk on it without much trouble, and in a short time they stood on the bank of the creek. For some time the Teenie Weenies stood watching the huge cakes of ice as they floated down the stream. In order to get a better view, the Lady of Fashion and the Doctor stepped out on a piece of ice which had not been broken away from the bank, and, to the horror of the little people, the piece of ice on which they stood snapped off and floated out into the surging stream.

It was impossible to swim among the sharp cakes of ice, as a Teenie Weenie would have been ground to pieces, for some of the cakes of ice were as big as soda crackers.

“Oh, jimminie crickets!” cried the frightened Dunce. “The Lady of Fashion and the Doctor will be drowned and then they won’t get any of that go-go-good dinner the Cook is getting ready for us,” and the poor Dunce burst into tears.

“Hold on a minute, Doc!” shouted a voice, and to the astonishment of the frightened Teenie Weenies a squirrel ran up a bush which hung over the stream. Hanging by his front feet, the squirrel swung his body down over the stream so that his bushy tail was only an inch or two from the water, and as the Lady of Fashion and the Doctor floated by he yelled to the Doctor to catch on.

Catching the Lady of Fashion about the waist, the Doctor grabbed the tail and the squirrel quickly pulled the two Teenie Weenies up to the bush, down which they safely crawled to the bank.

The Teenie Weenies were not the only ones who enjoyed a good dinner that day, for the little people presented the squirrel and his wife with four hickory nuts, five English walnuts, and a half dozen almonds for his bravery in rescuing the Lady of Fashion and the Doctor.