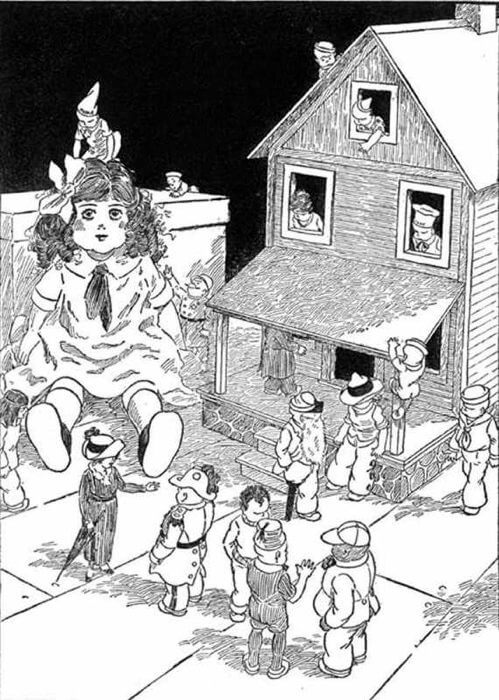 "SAY Cook,” said the Dunce, peering into the Teenie Weenie kitchen, “can’t we make s-s-some t-t-taffy? You have a lot of sugar now and I thought maybe you could s-s-s-spare s-s-s-some.”

“Oh, I suppose so!” answered the Cook. “But just remember this; I don’t want you to get things mussed up, and you’ve got to clean the kitchen up when you’re through.”

“Yes s-s-sir, we will,” cried the Dunce, and he hurried out to tell the good news to the Clown. But as he ran out of the door all thoughts of taffy popped from his tiny head, for he saw a most unusual sight.

The little men dropped the letter on the ground before the shoe house and quickly cut the envelope open with one of their tiny axes.

A piece of paper was folded inside the envelope and the little people soon pulled it out and spread it on the ground.

“Read it, General, read it!” shouted the excited Teenie Weenies.

“All right,” cried the General; “keep quiet and I’ll read it aloud.”

The little folks had been chattering like a lot of magpies, but they instantly held their tiny tongues and gathered closely about the edge of the letter.

“Dear Teenie Weenies,” began the General, “I thought I would write to you and ask you if you would come and live in my doll house. I have a nice doll house and it would make a very nice place for you to live in. I will cook good things for you to eat. You can play with my toys and I have a little toy horse that the Dunce can ride on.

“You can have a pan of water to swim in. I will make beautiful clothes for the Lady of Fashion. I will make cookies for you, and I will make candy too. Please come. I would like to have you come.

“Yours truly, your friend, Helen Meyers.”

“J-J-J-J-Jimminie f-f-f-fishhooks!” shouted the Dunce, “let’s go. I can pack my suit case in two shakes of a grasshopper’s hind leg.”

“Why goodness sakes!” exclaimed the Lady of Fashion, who had been looking at the little girl’s address at the bottom of the letter. “This little girl lives quite near and we could go over to her house and see her doll house.”

“Let’s do it,” shouted the little people so earnestly that the General gave his consent and they set off immediately.

After a long walk the Teenie Weenies finally arrived at the little girl’s home and, finding the coast clear, they soon made their way into the house.

In the corner of a room the little folks found the doll house, which they examined from top to bottom.

“Well, it’s a nice enough house to look at,” remarked the Cook, as he stepped out onto the front porch, “but there isn’t any running water or a sink in the kitchen.”

“And there isn’t a bath room,” cried the Lady of Fashion. “I simply couldn’t live in a house that had no bath.”

“That just suits me,” said the Dunce, who hated baths.

“Well,” said the General, sitting down beside the Old Soldier, “I don’t think we want to give up the old shoe house. Even if it is old, it’s a pretty comfortable place after all.” And all the little folks quite agreed with him.

The Teenie Weenies were much interested in the little girl’s doll, which sat near the doll house, and they examined it very carefully. Of course the Dunce had to climb all over the doll, although the Policeman had warned him to keep off. Finally he got his feet tangled in the doll’s hair and fell off its head right on top of the Policeman, who was so angry that he marched the Dunce home, and sent him to bed with nothing to eat but water and bread.

The little girl never knew that the Teenie Weenies had paid her a visit, but had she examined the front porch of her doll’s house she might have seen tiny foot prints in the dust.

The next morning the Teenie Weenies answered the little girl’s letter and here it is, just as the little people set it down:

“We want to thank you for your kind invitation, but we think it would be much better for us to live in the old shoe house. Shoehurst is quite comfortable, and it is so pretty under the old rose bush we should hate to give it up. The big briars, with their sharp thorns, guard us like a sentinel and keep big feet from treading on our home, and in the summer the cool leaves shield us from the hot sun. It is beautiful in June, when the scent of roses is in the air, to lie on the cool moss and listen to the humming of the bees.

“Your kind invitation has given us a great deal of pleasure, for it’s mighty nice to know that people want us to come and live with them, even if we can’t do it.

“We can’t leave Shoehurst, for, although it’s nothing but an old shoe, it’s home.

“Again thanking you for your generous invitation, we are, sincerely yours,