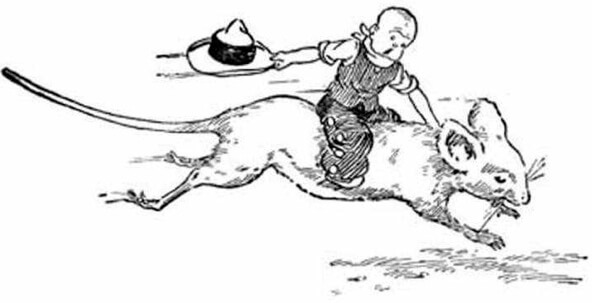 ALTHOUGH the Teenie Weenies refused to live with big people, they never tired of going into the big houses, for there were many wonderful things to see in them.

“It was mighty nice of that little girl to ask us to come and live in her doll’s house,” said the Old Soldier, “but if we lived all the time in a big house we’d get so used to them we wouldn’t care to visit them and that would spoil a lot of our fun, for it really is a great pleasure to wander among the things that big people use.”

One afternoon several of the little folks were taking a walk when they stopped before a big house.

“Let’s go in and look around,” said the Dunce, who had fond hopes of finding something good to eat.

“Yes, let’s do it,” cried the rest of the Teenie Weenies, and they quickly made their way into the cellar where Billie Mouse lived.

The entrance to the home of Mr. Mouse was through a crack between two bricks. The General knocked loudly several times, and receiving no answer, he told the rest to wait for him, and stepped boldly in. He found no one at home, and so, leaving his card, returned to the waiting Teenie Weenies.

“I’m awfully sorry Mr. Mouse is out,” said the Lady of Fashion, as the little people moved away. “I haven’t seen him for a long time.”

“Here he comes now,” cried the Cook, pointing toward a pile of lumber at the other end of the cellar. “And there’s another mouse with him.”

Billie Mouse saw the Teenie Weenies, and came bounding joyfully up to them.

Motioning the other mouse to come up, he introduced him to all the Teenie Weenies.

“I’m delighted to meet you,” the new mouse said, making a deep bow.

“Well how have you been?” asked the General, sitting down on the edge of an old scrubbing brush.

“Oh I’m in pretty good shape now,” answered Billie Mouse, “but I have had a very bad time of it for the last three weeks. I had a bad case of ptomaine poisoning.”

“Yes, I was pretty sick for a time,” said the Mouse. “Got hold of some cheese that was tainted.”

“You ought to be careful of what you eat,” cried the Lady of Fashion. “People are always putting out food which has been poisoned.”

“I know it,” said Billie Mouse, “especially cheese. I’m always suspicious of cheese, but this piece which made me sick looked perfectly good. I smelled it and carefully tasted it before I ate it and I thought it was all right.”

“Let’s have a race?” suggested the Cowboy, after the two mice and the Teenie Weenies had talked for some time.

The mice agreed, and a race course was soon chosen. The race was to be run between two long boards, and an old scrubbing brush was brought up for a hurdle at the end of the track. The Cowboy was to ride one mouse and the Dunce, who claimed to be a good rider, the other.

“Now,” said the General, “the man who rides down the length of these boards and jumps over the scrubbing brush first will win the race.”

When all was ready the signal was given and down the track came the mice, as fast as they could run, with the Cowboy and the Dunce sticking tightly to their backs. As the mice drew near the hurdle the Dunce was ahead, and it looked as though he would win the race. But just as the mouse sprang into the air to leap over the brush the Dunce lost his grip, and was tossed into the air. The mouse jumped over the brush, and when the Dunce came down he hit the ground with a great thud.

The Cowboy stuck tightly to his mouse, and leaping gracefully over the brush, he was declared winner.

The Dunce was not hurt by his fall. He joined loudly in the laughter that greeted his tumble, and was the first to start a cheer for the Cowboy.