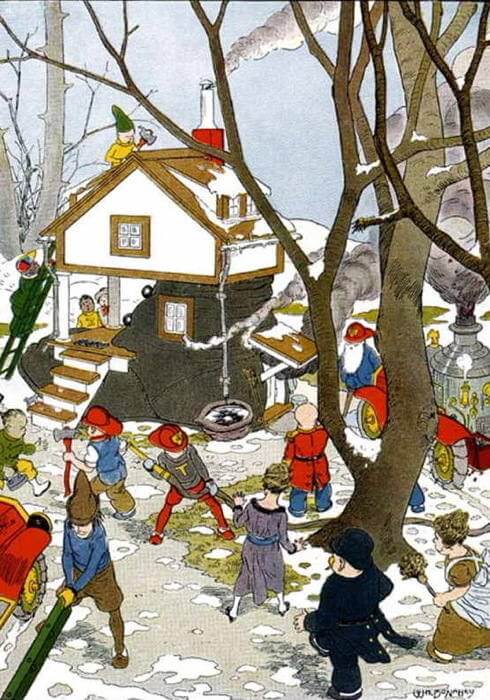 “F-f-f-f-f-fire! F-f-f-fire!” shouted the excited Dunce, as he dashed up to the shoe house, gasping for breath.

“Where? What?” cried the General popping his head out of the front door.

“Great guns!” shouted the General, throwing up his hands in despair. “The house or whatever it is will burn down before you are able to tell us where the fire is. Out with it. Where is the fire? Quick!”

“It’s it’s over t-t-t-t-to th-th-th-th-the Lovers’ house,” gasped the Dunce, just as the Teenie Weenie fire engine and hook and ladder dashed up to the shoe house.

“To the Lovers’ house,” cried the General as he jumped onto the running board of the fire engine.

The little engine fairly flew over the melting snow and it nearly fell over as it skidded dangerously around a piece of paving brick which lay in its path. Presently the fire department arrived at the Lovers’ bungalow, where they found clouds of smoke pouring out of the cracks around the back door and kitchen windows.

As Mr. and Mrs. Lover had locked up and gone with the Doctor to visit a sick mouse near by, it was found necessary to break in the back door, and soon a stream of water was thrown into the smoky kitchen.

The Chinaman was ironing one of the General’s shirts when he heard the news of the fire, and in the excitement he ran over to the Lovers’ house, carrying the hot iron he had been using at the time.

The excited Dunce climbed up onto the roof, and if it hadn’t been for Gogo he would have chopped a hole through the roof.

“What you-all goin’ to do with dat ax?” asked the little colored lad as he watched the Dunce hurry up the ladder.

“But there is no fire in the roof,” cried Gogo. “It’s down in the kitchen.”

“Makes no difference,” said the Dunce; “you always have to chop a hole in the roof.” And if Gogo hadn’t grabbed the ax from the Dunce’s hand the foolish fellow would have done a lot of damage with it.

Almost a teacupful of water was thrown into the tiny kitchen and it did more damage than the fire, for really all that burned was a bean, which Mrs. Lover had put on the stove to cook, and which had boiled dry.