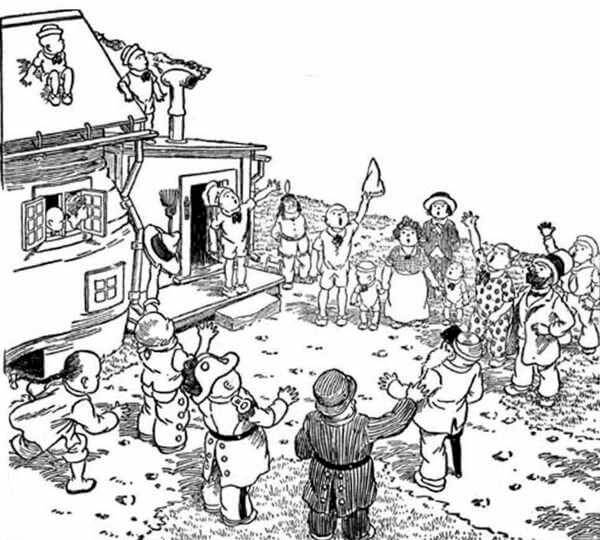 THE Doctor had been very busy for some time. First the mouse, who had fallen into the fruit jar, needed a great deal of attention. The mouse lived quite a distance from the hospital and the Doctor called on him once a day for two weeks. Then a squirrel fell sick and the Doctor had to call on him for several days. The twins had the mumps and the Scotchman complained of the rheumatism.

The Scotchman’s trouble caused the Doctor considerable thought. He worried over it for some time and then decided to take the matter up with the General. Taking his tall hat from its peg behind the office door he hurried over to the shoe house.

“General,” he said as he stepped into the teenie weenie library and closed the door softly, “I’d like to speak to you for a few minutes.”

“Go right ahead, Doc,” said the General, throwing aside his work.

“It’s about the Scotchman,” said the Doctor, dropping into a teenie weenie rocking chair. “Scotty was troubled with rheumatism in his legs last winter, and the pain has started again this fall.”

“It’s all on account of his wearing those short kilt skirts, and going around in his bare knees,” cried the General anxiously.

“Yes, I know it is,” answered the Doctor. “I’ve tried to get him to wear trousers during the winter weather, but he will not do it. So, he’s got to go south to spend the winter, where there’s no cold weather, or he’ll be sick.”

“How in the world will he ever get down south?” asked the General.

“Oh, I’ve fixed that up all right,” said the Doctor. “You know our friends, the birds, always go south for the winter?”

“Well, I was talking to a bird this morning, and she told me that she was starting south in a few days. I told her about our Scotchman, and she said that she would be glad to take him along. She said that he could ride on her back. She promised to look after him, and said she would bring him north again in the spring.”

The General thought the plan a good one, and Scotty was told to pack his grip, and be ready to go by the end of the week.

The Teenie Weenies were greatly excited over the news. The Lady of Fashion mended all the Scotchman’s clothes, and made him three tiny new shirts for the trip. The Chinaman washed everything he had that could be washed, starched and ironed his new shirts beautifully, and the others did all they could to make him comfortable and happy.

“Oh my,” said the Dunce, when he heard the news, “I wish I had rheumatism, too, so I could go along.”

The Teenie Weenies were up at the first break of day the morning that the Scotchman was to go. At the promised hour the bird flew up to the shoe house and lighted on the lawn.

“All aboard for Dixie,” cried the bird, and the Teenie Weenies all swarmed out with the Scotchman among them.

“Here,” shouted the Cook, running out with a big, neat package. “Here’s your lunch. I put in all the things you like best.”

“Jimminie,” muttered the Dunce, as he hungrily watched the lunch being forced into the Scotchman’s already overflowing grip, “I just do wish I was a-goin’!”

“We’ll send your trunk to you by mail,” shouted the Cowboy as the Scotchman climbed up on the back of the bird.

“All right,” cried Scotty. “Thanks and good-by to everybody.”

The bird spread her wings and gently rose from the ground. The Teenie Weenies stood shouting good-bys, and waving hands and handkerchiefs, till bird and Scotchman were lost to sight in the blue sky overhead.