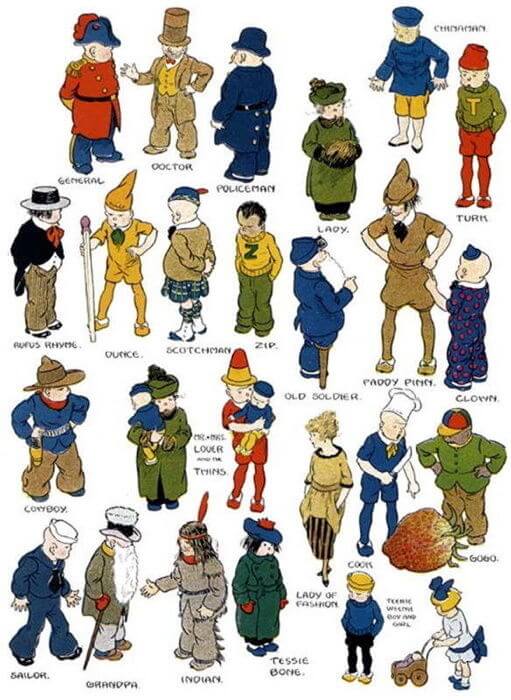 The General is the head of the Teenie Weenie family. He is very kind and wise and all the little folks trust and love him.

The Doctor looks after the health of the Teenie Weenies, and he is often called to help sick birds, mice and squirrels, for his skill as a doctor is known for quite a distance about the rose bush. He has an office in the Teenie Weenie hospital, and there he is able to treat the sick Teenie Weenies in the best possible way.

The Teenie Weenie Cook is boss of the kitchen and he cooks the most wonderful food that any Teenie Weenie ever tasted. His stove is made out of an old tin tobacco can. The oven is so big that a whole stuffed prune can be baked in it.

Gogo, the little colored Teenie Weenie, is the assistant cook and he can get up almost as good a meal as the Cook. The General says that no one can bake a lima bean as well as Gogo.

The Dunce is a foolish fellow, who is always doing funny things. He is always hungry and the Cook says that he can eat a thimbleful of pudding and then get inside the thimble. All the Teenie Weenies love the Dunce, for he is a kind hearted little chap.

The Old Soldier has only one leg but he is a good carpenter and he can make beautiful furniture out of a few matches. He is also a good tailor and he knows how to mend shoes wonderfully.

The Lady of Fashion is the most beautiful Teenie Weenie lady. She dresses in the very latest style and makes many things with her tiny needle. She is house keeper at the shoe house and often helps the Doctor, for she is a good nurse.

Grandpa is the very oldest Teenie Weenie. He is crippled up with rheumatism and spends most of his time sitting in front of the Teenie Weenie fireplace.

The Chinaman looks after the Teenie Weenie washing. He lives in an old tea pot, which has been made into a fine laundry. The spout of the tea pot makes a good chimney, for the Chinaman must have a fire most of the time, as he needs hot water to wash the clothes and also a place to heat his tiny irons.

The Cowboy is a great mouse-back rider; in fact he can ride most anything. He once rode a bucking grass hopper but he said it was pretty hard work. He can throw the lasso with wonderful skill and he is a good hunter.

The Indian is a silent little fellow. He spends much of his time in the woods and he can follow the trail of a caterpillar in the wildest jungle of tall grass.

The Scotchman is quite a musical Teenie Weenie. He plays the bagpipes and dances many fancy steps.

The Sailor is a great swimmer and knows all about boats.

The Turk is very strong. He can lift a thimble full of water above his head and he can carry a lead pencil on his shoulder. He knows a great deal about machinery, too.

Paddy Pinn is the tallest Teenie Weenie and he is a very jolly and wise man.

The Clown is a happy-go-lucky fellow, who can walk on his hands and tumble as well as an acrobat. He loves to play jokes and the Dunce is his great chum.

Tessie Bone is the newest Teenie Weenie. She joined the Teenie Weenie family not long ago and all the little people are very fond of her, in spite of the fact that she is quite a tomboy.

There are several Teenie Weenie women and children and all these little people live very contentedly in their tiny houses under the rose bush.

All the Teenie Weenies must do their share of the work. If you don’t work you can’t eat, is their motto and the work is usually done, for all the little folks have good appetites.

Every day some Teenie Weenie has to help the Cook and Gogo wash up the dishes and the next day he has to help the Lady of Fashion make the beds and sweep up the house, while on another day he must help cut wood for the stoves and the fireplaces.

With all the Teenie Weenies helping it does not take a great while to do the work, so the little people have most of the day to spend as they like.

The Teenie Weenies are always ready to help a friend in need and many times they have helped the squirrels, the birds, the rabbits and the mice, who live near the rose bush.

Every summer the little people plant a garden and raise many vegetables which they store away in a great cellar under a tiny hill near the shoe house.

Each fall the Cook makes delicious jelly and apple butter and puts up many cans of fruit and vegetables for use during the long winter. The little people smoke many fish and frog hams too.

Four potatoes will keep the Teenie Weenie family supplied all winter and when the Cook wants some potatoes for a meal he goes into the cellar and cuts off a piece. He then covers the place on the potato where he has cut out the piece with hot paraffine and in this manner he keeps the potato in good shape until it is used up.

Apples, carrots, and beets are kept in the same way, so you see the Teenie Weenies have plenty to eat during the winter.

In the summer they live on fresh fruit and vegetables from their garden, while once a week they buy a fresh minnow from a friendly King Fisher for a fish dinner. Occasionally they buy an egg from an old hen, which keeps them supplied with food for a long time, but the Teenie Weenies don’t have eggs often, for they are expensive, as the old hens demand twenty-five grains of corn for each egg.