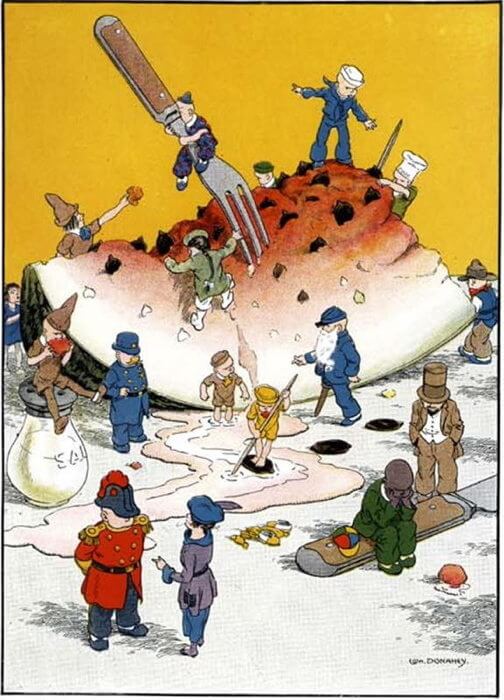 The little folks are so small that a lead pencil is to them a great log and a clothes pin will keep the tiny fire place burning for some time. A large tea cup would almost hold the entire family and they could go swimming all at once in a wash basin.

A potato will keep the Teenie Weenies supplied for several months, while one grain of rice will make one of the little people a square meal. Two baked lima beans will make a meal for the whole family and a thimbleful of butter will last a week.

The Teenie Weenies are so small that big people would hardly notice them and the little folks have to be careful to keep out of their way.

The Teenie Weenies live in an old shoe. They have built on a kitchen and a roof covers the top of the shoe. An old hat is used by the little people for a school house and quarters for the army. On top of the hat is a tiny bell which is used for a school bell and also as a fire alarm. On the second floor of the hat the army keeps its uniforms and guns and here the little soldiers drill one night every week. The Teenie Weenies have many tiny tools and they store all these useful things in an old tin can. There is a work bench in the can and here the men make things and mend the furniture. The shoe house in which most of the Teenie Weenies live is quite crowded, so one corner of the tool house has been made into a comfortable home for Paddy Pinn and Gogo.

An old tea pot has been made into a laundry and here the Chinaman and Zip, the Teenie Weenie wild man, live and do the family washing each week. The little folks have made a cigar box into a wonderful hospital and there the Doctor lives.

Mr. and Mrs. Lover have their own home and live, with their two children, who are twins, in a baby shoe which has been made into a beautiful bungalow.

All of these tiny buildings are close to each other under a certain rose bush and there the little folks live happily together.

The Teenie Weenies ask that the place where they live shall not be told, as they are afraid curious folks might come around to see them. “Not that we wouldn’t like to have big people visit us,” they say, “but, you see, being so little we might get tramped on and that would be quite the end of us.”