The Doctor Saves a Bird 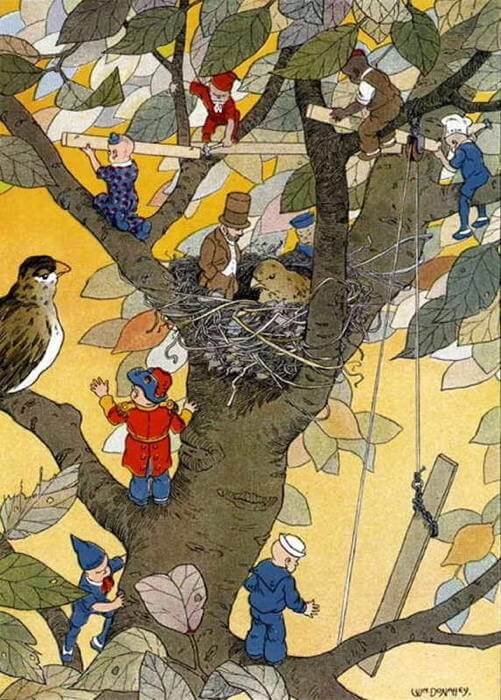 "DOCTOR!” shouted the Dunce one morning, as he popped his head into the library, “t-t-there’s a b-b-bird outs-s-side who wants to s-s-see you.”

“All right,” answered the Doctor, “tell him I’ll be out in a minute.”

“I think he’s a her,” said the Dunce, “but anyhow she’s awfully excited and I think something terrible must have happened.”

The Doctor stepped out onto the Teenie Weenie front porch, and before the house he saw a bird in the act of shaking a tear off the end of her bill.

“Oh, Doctor,” cried the bird, “please save my baby! I have lost two babies in the last month and please, oh, please, save my last baby for me.”

“Be calm, my dear lady,” said the Doctor, “and tell me all about the case.”

“Well,” began the mother, “I had three lovely babies this spring and about six weeks ago two of them were taken suddenly ill. I did everything I could for them, but they both died and only last night my last baby was taken sick. A squirrel, who lives in a tree near my nest, told me about you and I decided to come to you for help.”

“I’ll get my medicine case and join you in a minute,” said the Doctor, and running into the tiny house he soon returned.

“Jump right onto my back,” said the bird, “and I’ll take you to my baby in a jiffy.”

The Doctor climbed onto the bird’s back and in another minute he found himself sailing over the tops of the trees so fast he could scarcely breathe. In a few minutes the bird landed on a bush and quickly hopped to a pretty nest hidden beneath the green leaves. The Doctor slid off into the nest, where he found a young and very sick bird.

“Let’s see your tongue,” said the Doctor, but the poor bird was so sick he could hardly open his mouth and the Doctor was forced to take hold of his beak and help. Next the Doctor examined the bird’s eyes and felt his pulse.

“What has the patient been eating lately?” asked the Doctor.

“I have given him only the nicest and fattest bugs and worms I could find,” answered the mother.

“Madam,” said the Doctor, “your baby is a very sick boy, but I think I can save his life if you will follow my advice.”

“I’ll do anything to save my boy,” cried the poor mother.

“First,” said the Doctor, “the patient must not have much to eat. He will have to have a special diet, which the Teenie Weenie Cook will prepare for him. The patient must be kept dry at all costs,” continued the Doctor.

“I never leave the nest when it’s raining,” cried the mother bird, “and I keep him just as dry as can be.”

“You keep the rain off your child, no doubt,” said the Doctor, “but the nest gets wet and it must be kept dry too.”

The bird carried the Doctor back to the shoe house, where he soon made arrangements for taking care of the sick child.

The Teenie Weenies carried boards over to the tree and pulled them up to the nest with ropes and pulleys. They built a strong frame work over the nest and roofed it with card-board, which was given several coats of water proof paint.

“This roof will keep the nest dry,” said the Doctor, when the work had been done, “and that is a most important matter.”

The Cook made angle-worm broth for the sick bird and he cooked corn and rice in such a delicious way that the poor patient soon began to improve. At the end of a week the bird was much better and three weeks later he was entirely cured.