The Chinaman Asks for a Cistern 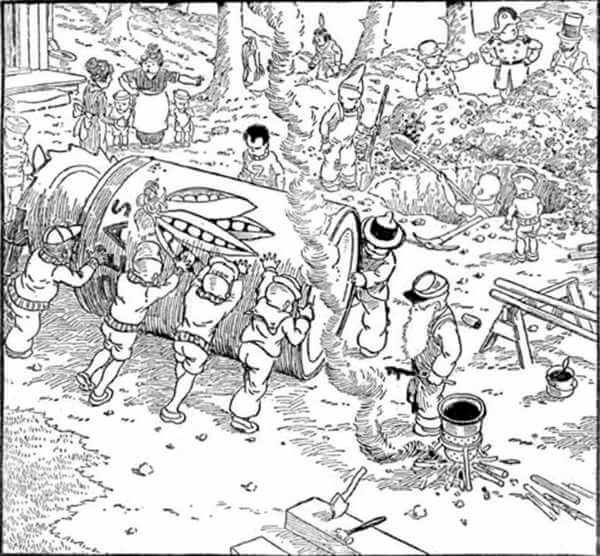 “WELL Chink, what can I do for you this morning?” asked the General, as the Chinaman took off his hat and stepped into the Teenie Weenie library.

“Allee same me gottee flavor me want to ask,” said the little fellow.

“Sit down, sir, and tell me what it is,” smiled the General, pushing a tiny chair towards the Chinaman.

“Well,” said the Chinaman, “me gottee lot of washie allee time and me use lottee water.”

“Yes, I imagine you use a lot of water.”

“Oh yes!” exclaimed the Chinaman. “Me use muchee much. Sometimes me use ten, twenty, twenty-three thimblefuls when me have bigwash. Me likee water from roof, it muchee much better to washee clothes in, but when the rain he no come down me have to carry water from cleek and that long way to carry wash water.”

“Yes it is,” agreed the General, “and we will have to build a cistern so you can have all the water you need without having to carry it so far.”

“You shall have a cistern. I’ll give orders for one to be built right away,” said the General.

The General went out in search of the Old Soldier, who was cutting some matches up for fire wood, and the two Teenie Weenies discussed the matter of a cistern for some time.

“We ought to have a good big cistern,” said the Old Soldier, “and I believe that we could make a good one by sinking a tin can in the ground.”

After a great deal of talk about the matter the little men decided to build the cistern as near the center of the little village as possible.

“You see,” said the Old Soldier, “if we build it at some central point we won’t have to lay so many pipes, and we will be able to catch all the water from most of the roofs.”

The next morning the little people went to work, and, while several of the Teenie Weenies dug a deep hole near the shoe house, the rest went out in search of a tin can to fill the hole.

On an ash heap not far away they found an old tin can and after a great deal of labor the little folks rolled it up to the hole. When the hole had been dug deep enough the Teenie Weenies rolled it in and then filled the earth in around the edges, so that when the work was done only the top could be seen.

The Teenie Weenies used dried hollow reeds for water pipes and when they had been painted thoroughly with a water proof paint, which the Old Soldier boiled up in a thimble, they carried the water nicely.

The pipes were connected up with the spouting from the tiny roofs and laid in trenches to the cistern. The top of the can was cut off and a tight fitting cover was put on. A little door was left in the top of the cover, so a bucket could be lowered and water drawn up when it was needed. A bucket made out of a hazel nut was used for the purpose, and it took three buckets full to fill a thimble.

“Now allee we need is a rain,” cried the Chinaman, when the work was finished. “And me hope it rainee like everythings to-night.”

“Well you may have your wish, Chink,” said the Sailor, looking up at the sky. “It sort of looks like we may have a shower to-night.”

The Sailor was right. It did rain that night and it rained hard.

The Chinaman was up at daylight to see whether the cistern had been filled, and to the great joy of the little chap he found it full to the very top.