The Constitution and the Union 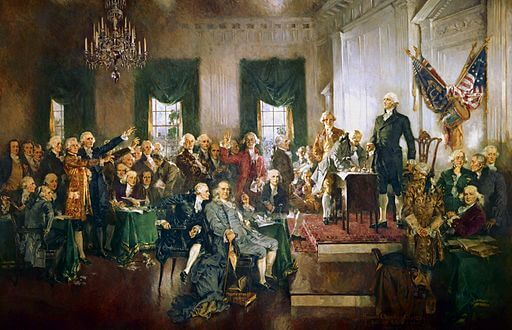 Daniel Webster delivered this speech on the floor of the U.S. Senate on March 7, 1850. Retrieved from the book, Daniel Webster for Young Americans: The Greatest Speeches of the Defender of the Constitution (1903). For your reference, here is the U.S. Constitution.

Mr. President,—I wish to speak to-day, not as a Massachusetts man, nor as a Northern man, but as an American, and a member of the Senate of the United States. It is fortunate that there is a Senate of the United States; a body not yet moved from its propriety, not lost to a just sense of its own dignity and its own high responsibilities, and a body to which the country looks, with confidence, for wise, moderate, patriotic, and healing counsels. It is not to be denied that we live in the midst of strong agitations, and are surrounded by very considerable dangers to our institutions and government. The imprisoned winds are let loose. The East, the North, and the stormy South combine to throw the whole sea into commotion, to toss its billows to the skies, and disclose its profoundest depths. I do not affect to regard myself, Mr. President, as holding, or as fit to hold, the helm in this combat with the political elements; but I have a duty to perform, and I mean to perform it with fidelity, not without a sense of existing dangers, but not without hope. I have a part to act, not for my own security or safety, for I am looking out for no fragment upon which to float away from the wreck, if wreck there must be, but for the good of the whole, and the preservation of all; and there is that which will keep me to my duty during this struggle, whether the sun and the stars shall appear, or shall not appear, for many days. I speak to-day for the preservation of the Union. “Hear me for my cause.” I speak to-day, out of a solicitous and anxious heart, for the restoration to the country of that quiet and that harmony which make the blessings of this Union so rich, and so dear to us all. These are the topics that I propose to myself to discuss; these are the motives, and the sole motives, that influence me in the wish to communicate my opinions to the Senate and the country; and if I can do anything, however little, for the promotion of these ends, I shall have accomplished all that I expect.

Mr. President, I should much prefer to have heard from every member on this floor declarations of opinion that this Union could never be dissolved, than the declaration of opinion by anybody that, in any case, under the pressure of any circumstances, such a dissolution was possible. I hear with distress and anguish the word “secession,” especially when it falls from the lips of those who are patriotic, and known to the country, and known all over the world, for their political services. Secession! Peaceable secession! Sir, your eyes and mine are never destined to see that miracle. The dismemberment of this vast country without convulsion! The breaking up of the fountains of the great deep without ruffling the surface! Who is so foolish—I beg everybody’s pardon—as to expect to see any such thing? Sir, he who sees these States now revolving in harmony around a common centre, and expects to see them quit their places and fly off without convulsion, may look the next hour to see the heavenly bodies rush from their spheres, and jostle against each other in the realms of space, without causing the wreck of the universe. There can be no such thing as a peaceable secession. Peaceable secession is an utter impossibility. Is the great Constitution under which we live, covering this whole country,—is it to be thawed and melted away by secession, as the snows on the mountain melt under the influence of a vernal sun, disappear almost unobserved, and run off? No, Sir! No, Sir! I will not state what might produce the disruption of the Union; but, Sir, I see as plainly as I see the sun in heaven what that disruption itself must produce; I see that it must produce war, and such a war as I will not describe, in its twofold character.

Peaceable secession! Peaceable secession! The concurrent agreement of all the members of this great republic to separate? A voluntary separation, with alimony on one side and on the other! Why, what would be the result? Where is the line to be drawn? What States are to secede? What is to remain American? What am I to be? An American no longer? Am I to become a sectional man, a local man, a separatist, with no country in common with the gentlemen who sit around me here, or who fill the other house of Congress? Heaven forbid! Where is the flag of the republic to remain? Where is the eagle still to tower? or is he to cower, and shrink, and fall to the ground? Why, Sir, our ancestors, our fathers and our grandfathers, those of them that are yet living amongst us with prolonged lives, would rebuke and reproach us; and our children and our grandchildren would cry out shame upon us, if we of this generation should dishonor these ensigns of the power of the government and the harmony of that Union which is every day felt among us with so much joy and gratitude. What is to become of the army? What is to become of the navy? What is to become of the public lands? How is each of the thirty States to defend itself?

The idea of a Southern Confederacy.

I know, although the idea has not been stated distinctly, there is to be, or it is supposed possible that there will be, a Southern Confederacy. I do not mean, when I allude to this statement, that any one seriously contemplates such a state of things. I do not mean to say that it is true, but I have heard it suggested elsewhere that the idea has been entertained, that, after the dissolution of this Union, a Southern Confederacy might be formed. I am sorry, Sir, that it has ever been thought of, talked of, or dreamed of, in the wildest flights of human imagination. But the idea, so far as it exists, must be of a separation assigning the slave States to one side and the free States to the other. Sir, I may express myself too strongly, perhaps, but there are impossibilities in the natural as well as in the physical world, and I hold the idea of a separation of these States, those that are free to form one government, and those that are slaveholding to form another, as such an impossibility. We could not separate the States by any such line, if we were to draw it. We could not sit down here to-day and draw a line of separation that would satisfy any five men in the country. There are natural causes that would keep and tie us together, and there are social and domestic relations which we could not break if we would, and which we should not if we could.

Instead of speaking of the possibility or utility of secession, instead of dwelling in those caverns of darkness, instead of groping with those ideas so full of all that is horrid and horrible, let us come out into the light of day; let us enjoy the fresh air of Liberty and Union; let us cherish those hopes which belong to us; let us devote ourselves to those great objects that are fit for our consideration and our action; let us raise our conceptions to the magnitude and the importance of the duties that devolve upon us; let our comprehension be as broad as the country for which we act, our aspirations as high as its certain destiny; let us not be pygmies in a case that calls for men. Never did there devolve on any generation of men higher trusts than now devolve upon us, for the preservation of this Constitution and the harmony and peace of all who are destined to live under it. Let us make our generation one of the strongest and brightest links in that golden chain which is destined, I fondly believe, to grapple the people of all the States to this Constitution for ages to come. We have a great popular, constitutional government, guarded by law and by judicature, and defended by the affections of the whole people. No monarchical throne presses these States together, no iron chain of military power encircles them; they live and stand under a government popular in its form, representative in its character, founded upon principles of equality, and so constructed, we hope, as to last forever. In all its history it has been beneficent; it has trodden down no man’s liberty; it has crushed no State. Its daily respiration is liberty and patriotism; its yet youthful veins are full of enterprise, courage, and honorable love of glory and renown. Large before, the country has now, by recent events, become vastly larger. This republic now extends, with a vast breadth, across the whole continent. The two great seas of the world wash the one and the other shore. We realize, on a mighty scale, the beautiful description of the ornamental border of the buckler of Achilles:—

Return to the Daniel Webster page